This month, I caught up with Eliav Cohen, co-founder of The Bot Lab. They are one of Drift’s long-time partners and have been using Drift themselves and for customers for almost three years.

I spoke to Eliav to get a better understanding of what a successful optimization of Drift really looks like with both mid-market and enterprise organizations.

One thing to note before we jump in: Eliav also runs a hot air balloon company. Yes, you read that right. I’m never one to shy away from a good pun, so fair warning there are a few sprinkled in throughout our conversation. I couldn’t help myself!

Editor’s note: The following has been edited and condensed for clarity.

Nick Salvatoriello: Eliav, can you tell us about your background and what you do for Drift customers?

Eliav Cohen: I am one of the founders of The Bot Lab. We’ve been working with Drift for almost three years now. We are proud to have been counted as one of Drift’s top partners during that time. We mainly work now with mid-market, enterprise, and publicly traded organizations (including ones that are not on Drift yet and also folks who’ve been on Drift for some time), in order to help optimize their bot playbooks for success.

Nick: How did you get into helping customers build better bots for a living?

Eliav: To give you an idea where I was before doing bots, I ran sales teams at SaaS organizations and have been involved in sales operations. However, up until about three years ago, I’d never used Marketo or Pardot. I’d never built a landing page. I was never in charge of lead-gen. I had never done demand gen activities, never built email cadences. I had done sales for a long time and I’d led large sales teams, but leveraging technology like Drift was new to me.

Nick: Interesting. A salesman by trade. So, how did you first hear about Drift?

Eliav: I first learned about Drift a few years ago when I started a hot air balloon company as a passion project for myself. Shortly after I got it up and running, I noticed that, on my (originally non-Drift) live chat tool I had set up on my website, people kept asking me the same few questions about my balloon service over and over again. I was like, “This is dumb. There’s got to be a way to automate this.” And I went off searching on the web for solutions for how to automate answering the same site visitor qualification questions over and over again.

I found Drift, fell in love with the platform, and after seeing how many other customers were struggling with the same challenges I was, started The Bot Lab as a Drift-customer-focused consultancy. 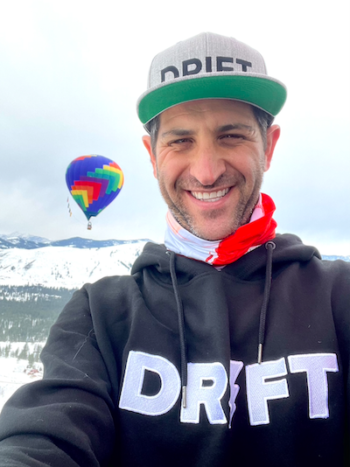 Along with some key staff I’ve recruited to help me, I continue to build, test, and learn from bots we use for our own organization and then take those learnings to help other companies be successful with Conversational Marketing and Conversational Sales.

Nick: Sounds like your balloon business really helped your Drift skills to take flight! Can you talk about a recent optimization you did for an existing Drift customer?

Eliav: Yes, let’s take a look at an example of a fairly new Drift customer we worked with. This customer had been using Drift for almost six months when they reached out to us. They asked us to look at their portal and help them improve what they had in place so far. When I logged in, I saw they were already seeing success with Drift. They were having a couple hundred conversations a month. For most companies, that’s doing fine. The thing is, “fine” isn’t good enough for many Drift customers – and this one was no exception. They wanted help in achieving best-in-class performance on the platform.

Over the year, this customer worked with us on optimizing their implementation and utilization of Drift, they saw a 500%+ increase in chat-based conversations and a 600%+ increase in prospect emails captured. 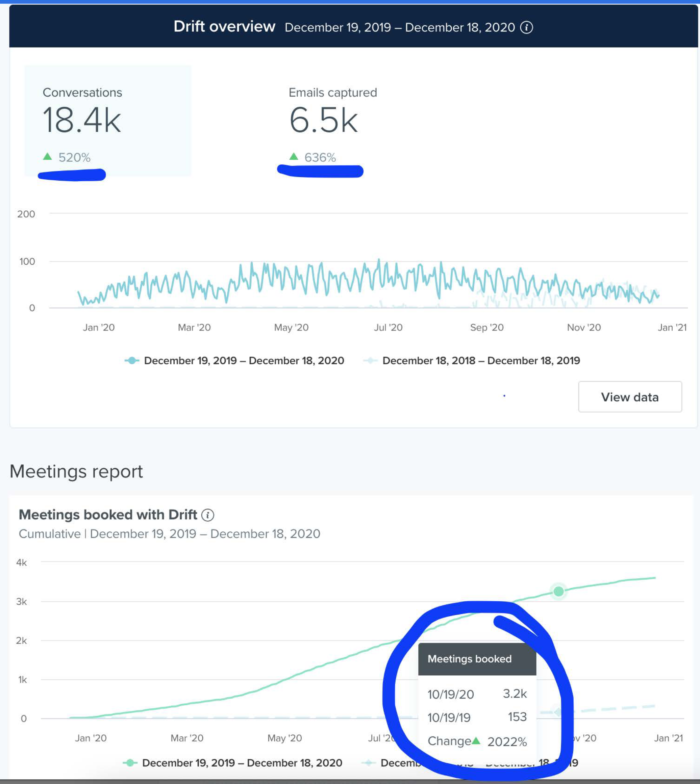 And what’s really awesome about this is the 3,000+ meetings they booked through Drift for their sales teams. This is compared to the ~150 meetings they had booked in total from their first six months utilizing the platform. Their sales teams also have a ~65% close rate from those meetings. So, their ROI on further optimization of their “fine” performing bots was pretty fantastic.

Nick: Wow. Just goes to show what a little outside expertise can do. What are some of the top areas of Drift you look to optimize for customers in order to achieve results like that?

Eliav: Many customers I meet with initially are utilizing Second Net Bots, which is basically a bot that pops up on a conversion page saying, “Hey, want to skip the form and get what you want right now?” Second net bots do work well, but if you do it right, and you build out both of the attributes, all the SFDC mapping, and all the things that need to happen, you can get rid of your static forms across the whole website, because the chatbots will provide a more personalized and real-time experience.

Nick: That’s a bold move. So, what does that really take for a customer to remove their web forms and go all-in on bots?

Eliav: Well, it takes a couple of things. Number one is, it takes the sales and marketing team believing that a bot is better conversion-wise than a form. Because there’s a certain amount of people that are not going to fill out your forms because of the bad experience. Let’s say 30% of people actually make it to your giant form and decide to fill it out. What happens after that? Well, then it goes into Salesforce or whatever CRM you’re using, then it gets routed to somebody, and then it goes into nurturing like an Outreach campaign. Someone follows up either on an automated 10-email cadence or a salesperson reaches out by phone and tries to get a hold of them. Eventually, some of those contacts convert into meetings and some of them don’t. Not great.

Now, what I try to show customers is that with Drift bots greeting all their visitors instead of forms, the experience is night and day.

Someone coming to your site says, “Hey, I have a question about the demo,” and they can get an actual question answered and get to a live person or they can book a demo 24/7, and they can be qualified with the proper routing and qualification rules in order to do it.

Nick: How do you use data from Drift to really demonstrate that impact?

Eliav: When you’re thinking about data points to back why using a bot is better than a static form, look at stats in Drift on how existing bots are doing in both collecting emails and booking meetings for qualified prospects. Compare those against the conversion rates of pages where the only option is filling out this entire static form, followed by sending out massive emails and having salespeople reach out manually. Ask yourself, how much does that cost the organization in not having that quickness to connect in real-time? Providing that personalized, real-time connection with prospects over chat vs. reactive follow-up on static form fills is why Drift accelerates revenue.

Nick: I see that on some of the bots you’ve built for customers, you’ve been able to get emails captured on 50-70% of all conversations they’re having. How are you doing that?

Eliav: Yeah! 50-70% email capture from a bot is incredible, right? Well, if you’re trying to figure out what those highest-email-capture bot playbooks are, they’re called Conversational Content. Conversational Content in Drift allows someone to have a conversation with your bot or live chat team around a PDF on your website. In the past, PDFs such as ebooks or reports would have been behind some gated form which the majority of visitors aren’t filling out these days. I think marketers should ungate all their content to allow as much of their target audience as possible to read it and engage with it. Drift allows you to do that – host a PDF, a piece of Conversational Content, next to a bot that allows you then answer questions or book meetings automatically as well as route reps in for a live chat for target accounts. Again, a customer that’s going to be most effective with this needs their bot built out properly so that it can do proper qualification, routing and help move people forward in the sales process.

Nick: What have been some of your lessons learned from helping so many customers to do better with Drift?

Eliav: The biggest learning I’ve taken from setting multiple instances of Drift up for success is building for scalability. So, you really need to figure out how to build your core bot scalably so you’re not spending so much time on managing and maintaining all of that. I’ve learned you often have to do major changes based on:

Nick: Sounds like you can then teach your users to become self-sufficient?

Eliav: Yes. Once we’ve got a solid foundation in place with all the systems tying together, we typically transition the engagement to us focusing on strategy while teaching their marketers to clone and update the core bot we built for them and adapting for whatever their next use case is – be it a webinar sign up, a landing page for an ad, an ABM campaign. And it’s important to train the sales team how to utilize chat in a sales context. Because chat is a transactional conversation, and most of the enterprise sales reps I’ve worked with just aren’t used to having these transactional conversations. It’s really important to understand transactional sales and have someone who’s a transactional sales expert in building your bots, because that’s the reason that they’re effective as they move buyers through the funnel. So we build training and Drift certifications for both BDRs/SDRs as well as AEs into all the optimization work we do.

Nick: If people find these examples inspiring and want to achieve similar results, where’s the best place for them to go to get ahold of you?

Eliav: Go to TheBotLab.io, talk to us/our bot, book a time to walk through your chatbots, opportunities, show you benchmarks similar and how we helped them implement Drift to achieve growth. Always happy to chat and give a lay of the land on where they’re at, show examples to get where they want and what it might take to get there (for them to do it or to hire us to help set this up to really scale and do the fun stuff).

Interested in working with a Drift Partner? Check out our directory here. 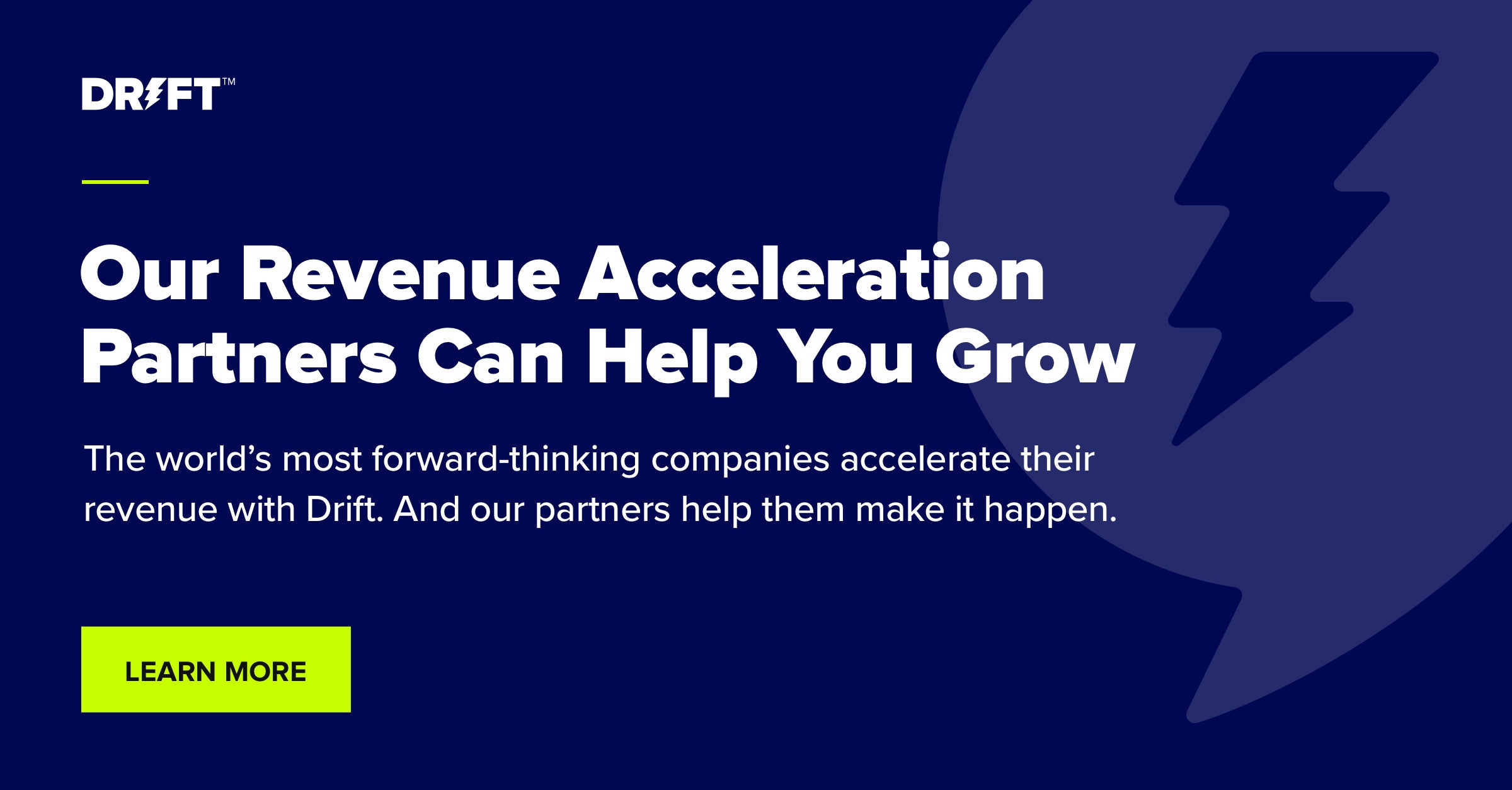 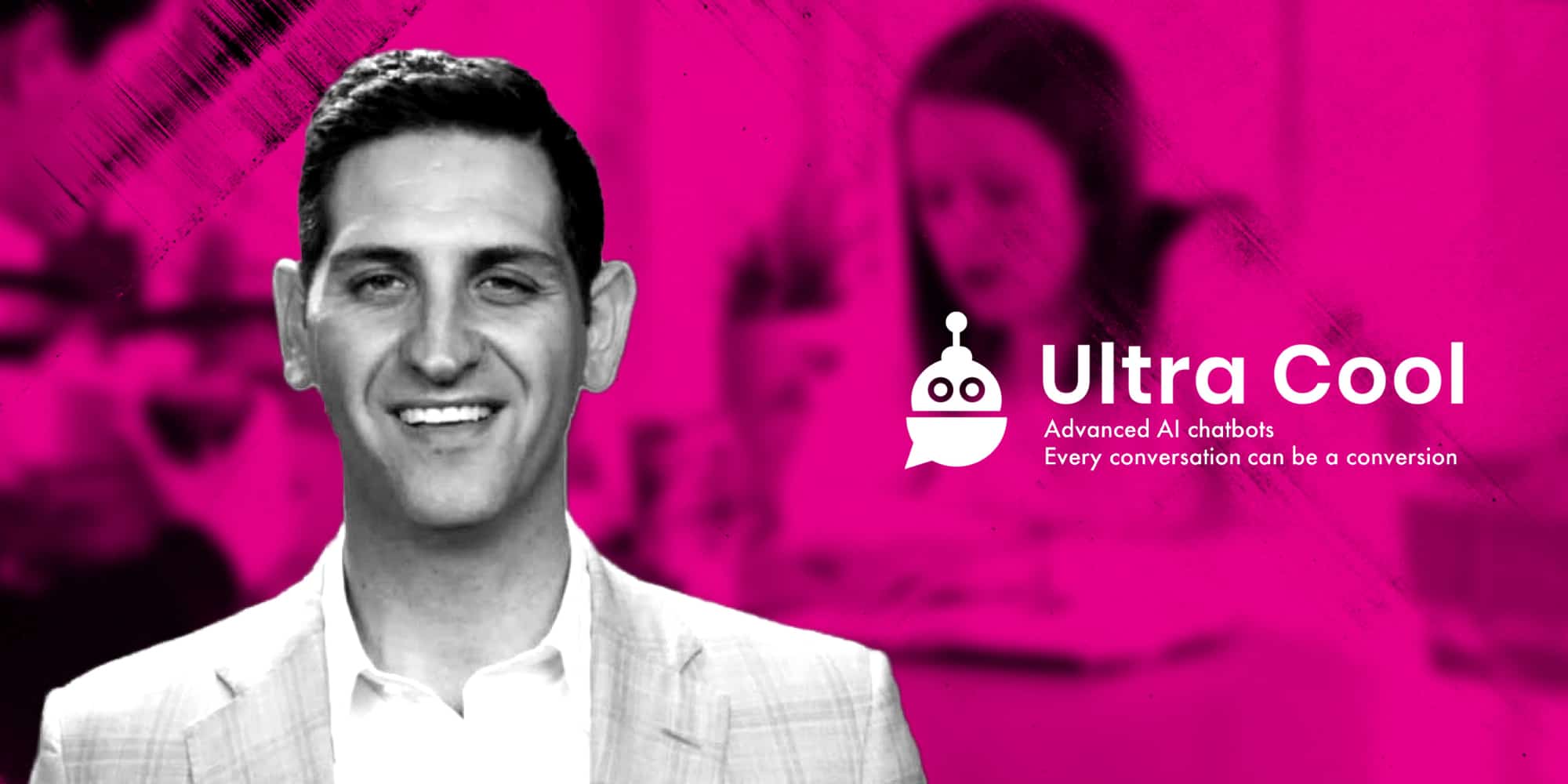 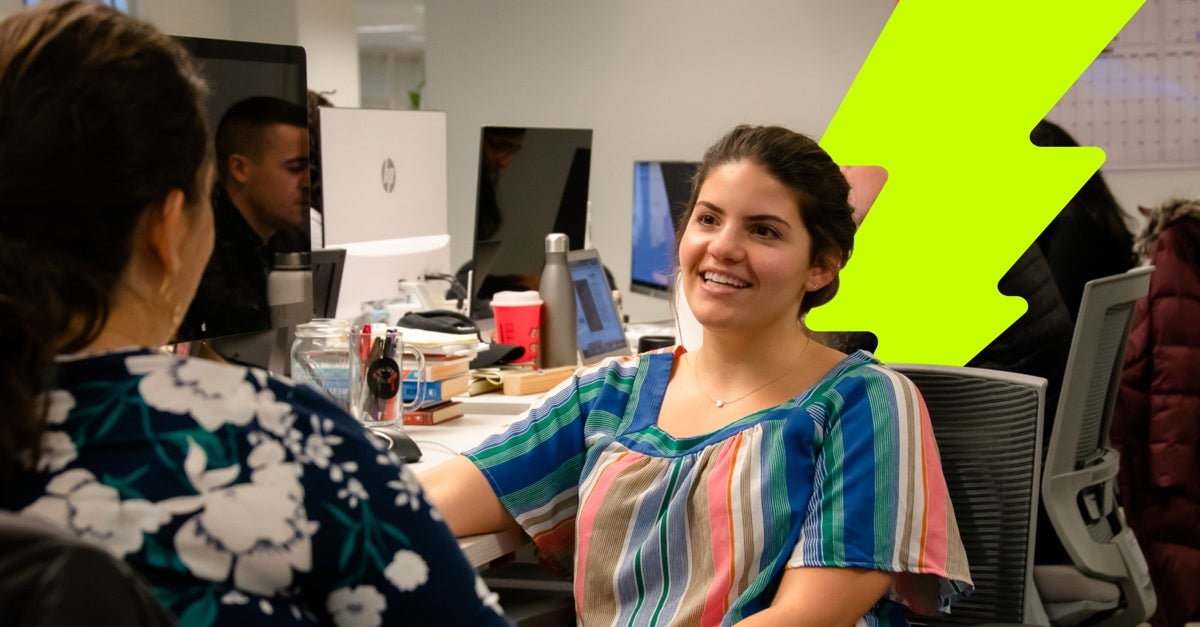 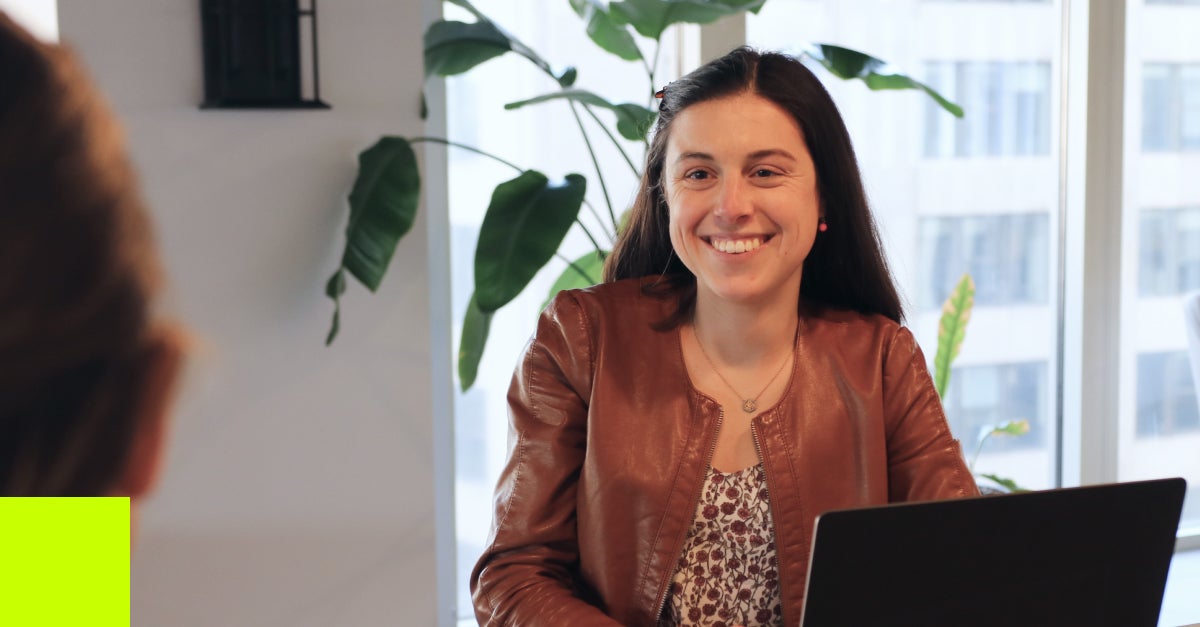