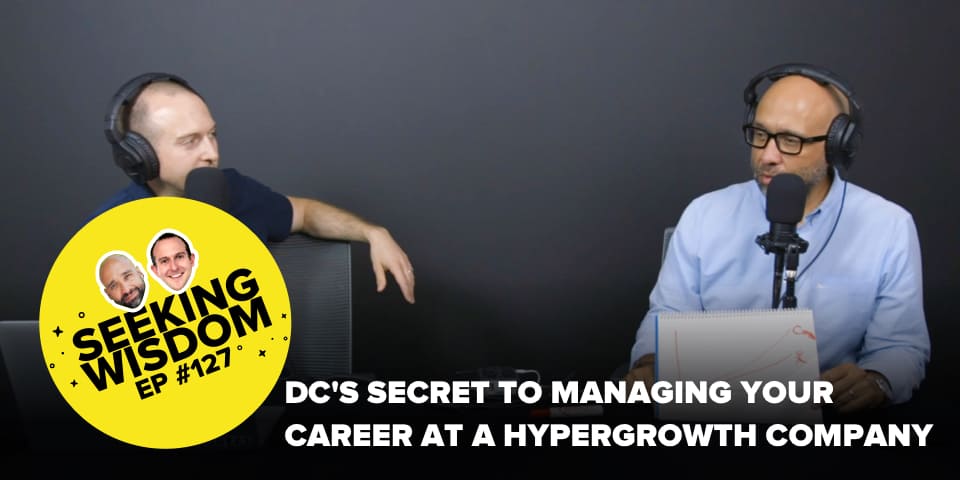 If you’re not growing at the same rate your company is, you can expect some problems.

This means that if you work at a hypergrowth company, you’ve got to keep up your own individual growth. If you don’t, there’s a good chance you won’t be there for long. We’ll get to why that is in just a minute.

On the latest episode of Seeking Wisdom, DC busted out his whiteboard to talk about three different comparisons of company growth vs. individual growth. 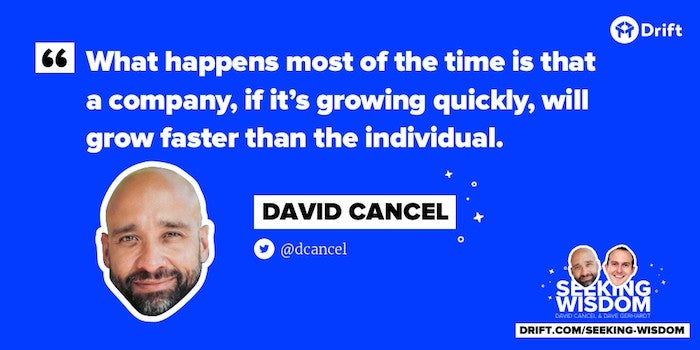 Most of the time, if a company is growing quickly, it will grow faster than the individual.

Over time, if the company is undergoing hypergrowth, and the person is not able to keep up with that growth, then a gap will form between the two growth paths. If you’re that person, this isn’t a knock on you. In fact, it’s very normal for company growth to outpace individual growth.

However, what happens in this scenario is the company has to start bringing in people with more experience to fill the gap. This can lead to frustration at being passed over from people who have been at the company for longer. Many times, they leave, seeing their career paths as limited at the company.

In other cases, you may be in a slow-growing company. In this scenario, you grow personally and professionally, but the company has not experienced enough growth to reward you or offer you new opportunities.

This is also normal. There’s nothing wrong with these types of companies, it’s just that the growth opportunities go away for the high-growth individual. The end result is the same as Scenario #1: the person will typically leave the company.

The last scenario is rare. It’s when the company is experiencing hypergrowth and so is the individual. In fact, the individual is actually growing slightly ahead of the company, and they can therefore jump into bigger and bigger opportunities.

The reason you hear so many stories of founders like Jeff Bezos or Bill Gates is not just because they’ve founded a great company but because what they’ve done is so unusual. We are amazed by someone like Sara Blakely, who started Spanx out of the back of her car, turned it into a multi-billion dollar brand, and is still running it.

It’s rare enough for a company to go from nothing to billions, but even rarer when the same person runs it all the way through from when it was just an idea to when it’s a huge international company. It’s easy to say these people are just abnormally smart, but none of them would be able to stick with their high-growth companies today if they hadn’t grown as individuals in equal measure.

What usually happens is that even if the company and individual growth are the same for a year, or five years, or 10 years, at some point one or the other’s growth starts to flatten out, and you get back to one of the first two scenarios.

Nobody said this was easy.

If you’re the person in Scenario #1, it’s easy to give up.

If your company’s line on the graph is skyrocketing, and someone brought in from the outside gets the next promotion over you, you might be tempted to have a fatalistic mindset. You might say, “That’s it. I’ll never get promoted here.”

Instead, try developing an abundance mindset that says, “Wow, the company’s growing faster than I am. Is there an opportunity for me to set myself up for the next promotion?”

Maybe you missed the first step, but can you do anything to achieve personal growth so that you end up being ahead of the company when it takes its next step?

How Being an Optimist Helps You Achieve Goals

DC is an optimist—to an extreme sometimes.

The goals he sets never feel like achievable goals. He believes he can do them, and he’s usually right. Setting big goals, it turns out, is one of the ways you can grow beyond your company.

If you’ve ever read 7 Strategies for Wealth & Happiness by Jim Rohn, you know that goals are like magnets. They pull you where you need to go. 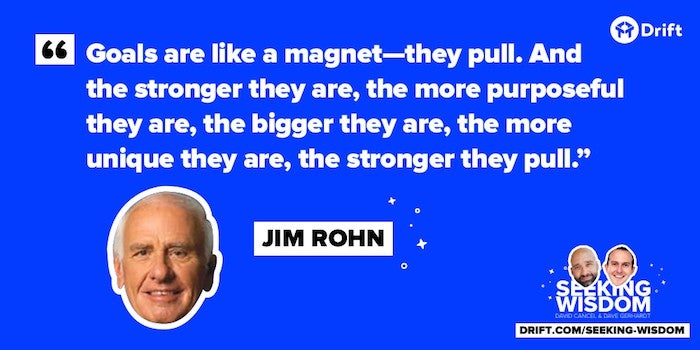 DC is not an elaborate planner, but he’s always used the technique of setting big goals. A lot of times, he doesn’t even know how he’s going to get there, but when you set big goals, you often end up doing the things you need to do each day to reach them almost subconsciously.

In other words, setting big goals is the only way you’re going to grow beyond your company.

Want to be a fly on the wall for this conversation? Watch the full episode here:

Listen to the full episode here:

‹ 6 Months and 1,000+ Meetings Later: The 6 Things I Learned Building Chatbots At Drift
Why Every Marketer Should Have a Swipe File ›
P.S. Join 30,000 of your peers. Subscribe to the newsletter for hypergrowth.