Snowflake has become the stuff of Silicon Valley legends. With triple-digit growth and sky-high net retention rates, the cloud-based data warehouse company is a magnet for heavyweight investors like Salesforce Ventures and the notoriously tech-and-IPO cautious Berkshire Hathaway. For some perspective, Berkshire Hathaway – led by Warren Buffett, the “Oracle of Omaha” – hasn’t participated in an IPO offering in more than 50 years. But the conglomerate broke with tradition specifically for Snowflake, purchasing $250 million worth of stock in a private placement (along with four million shares from the company’s previous CEO, Bob Muglia).

It’s a move that didn’t go unnoticed, and the implication was clear: Snowflake is special.

There’s quite a bit of evidence to back this up. For one, Snowflake holds the record for biggest software IPO in the U.S. to date (it debuted on the New York Stock Exchange on September 16, 2020). Its shares more than doubled on this first day of trading: opening at $120, peaking above $300, and closing at a little less than $254. With 28 million shares sold, the company raised more than $3 billion (and is currently valued at around $70 billion). 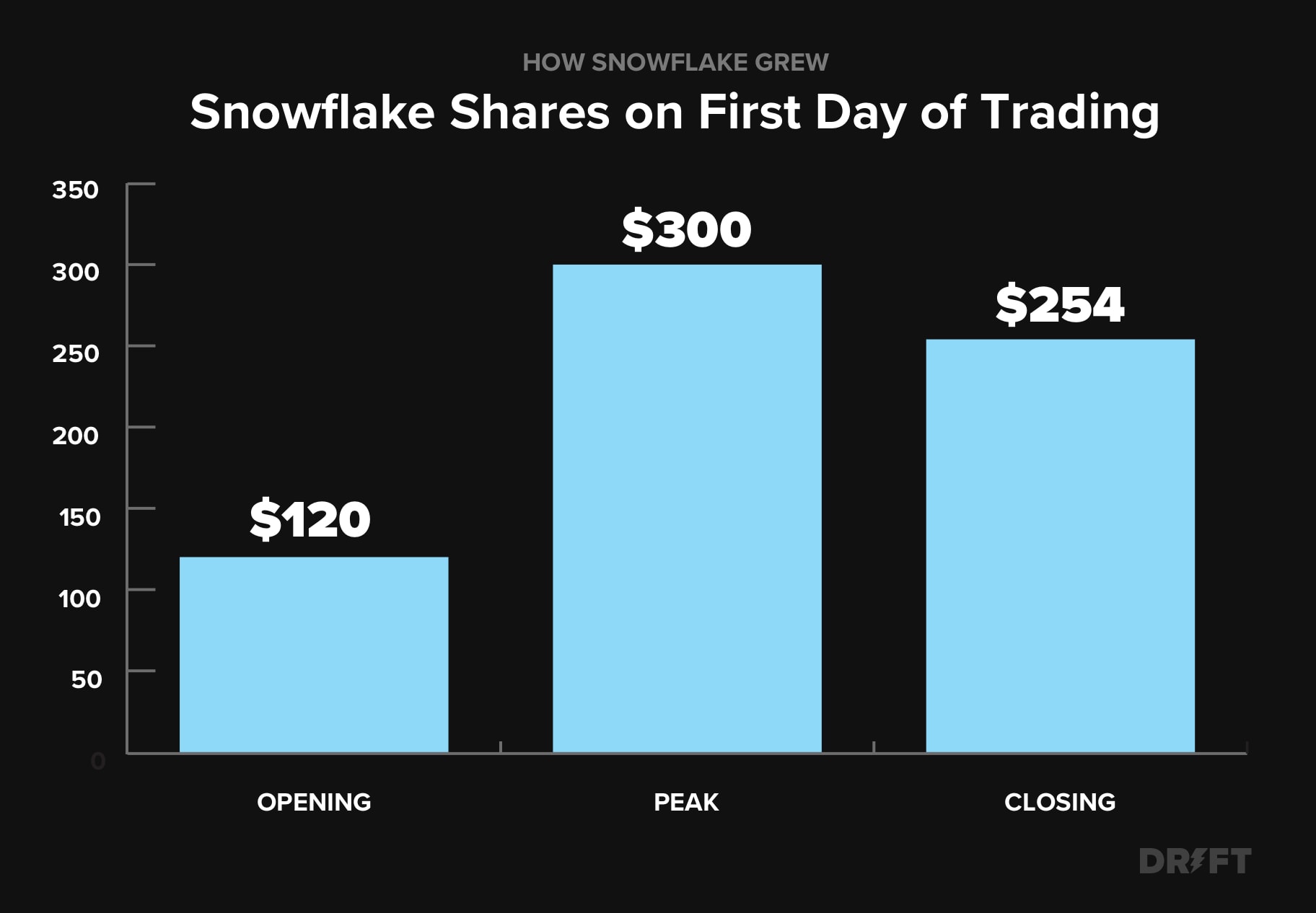 And everyone is talking about it. Much of the buzz is focused on the company’s unicorn status. Others are warier, looking at Snowflake’s net losses and saying the stock is overvalued. But across the board, no one can deny that Snowflake has become a force to be reckoned with. Prior to IPO, Snowflake’s funding rounds were consistently in the multi-millions. The company grew by 174% for the fiscal year ending January 31, 2019, with a net retention rate of 158%.

So, how did they do it? How did Snowflake disrupt the data warehousing industry and continue to grow at such an astronomical rate? Like most success stories, there are a few factors at play here – but we’ve got you covered, outlining the top four reasons behind Snowflake’s success. 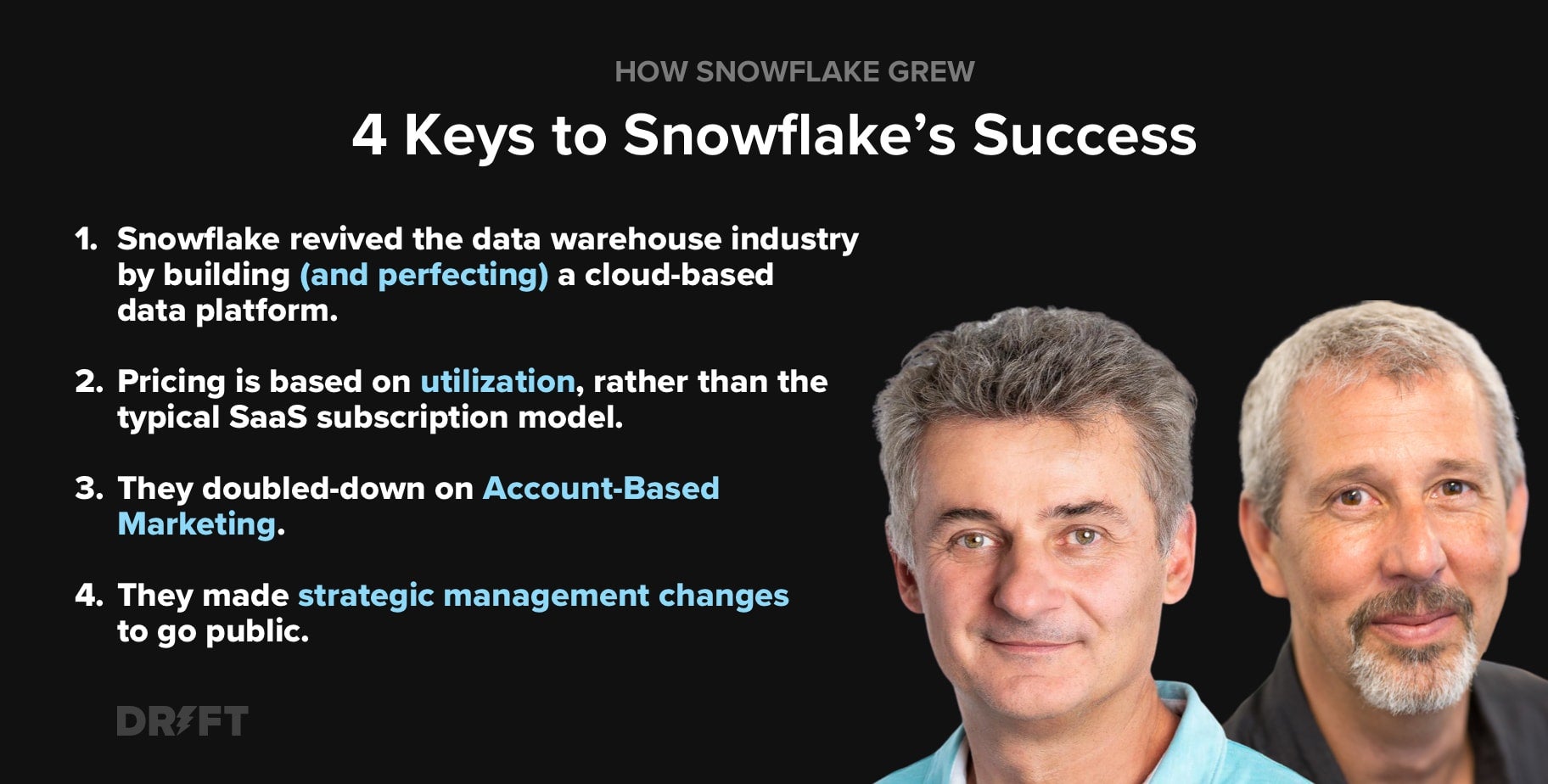 Let’s take it back to the beginning.

In 2012, the two soon-to-be co-founders of Snowflake, Benoit Dageville and Thierry Cruanes, were veteran data architects at Oracle – and Hadoop was dominating office discussions. Their colleagues wondered if Hadoop, an open-source framework for storing and processing massive data sets across a cluster of computers, would make their work irrelevant.

There was a growing notion that the data warehouse industry was dying.

So, the idea for Snowflake started to take shape: a data platform built specifically for the cloud.

At the time, this was a revolutionary idea. Data warehouses had traditionally been on-premises – that is, only on the company’s servers and hardware. But this was expensive: companies had to foot the bill for hardware, configuration, ongoing management…not to mention that scaling was a multi-step and manual process. In other words, it was time-consuming and even more costly.

Dageville and Cruanes knew that their data warehouse makeover needed to factor in speed, ease of use, cost-effectiveness, and in Dageville’s words, “master the elasticity of the cloud.” The two paired up with Marcin Zukowski, former CEO of Vectorwise (now Actian Vector), to get to work on their vision for a data-warehouse-as-a-service built on top of the public cloud.

In doing so, these three founders were able to proactively solve the problems that had been embedded into on-premises solutions. For one, Snowflake stores data independently of where computation is performed. There’s a big discrepancy between how much storage costs vs. the cost of compute – separating the two not only means they can scale independent of each other, but that customers are only paying for what they actually use (more on this later). Second, customers could quickly spin up and readjust virtual data warehouses in real-time and easily share data sets across teams to avoid silos.

While the list could go on, it’s important to call out that Snowflake was built to work across clouds – avoiding what Dageville and Cruanes called “cloud lock-in.”

When Snowflake was first created, it ran on Amazon Web Services (AWS), and has since expanded to Microsoft Azure and Google Cloud Platform. This has created an interesting relationship between Snowflake and these cloud-providers – simultaneously acting as a customer and competitor. Many worry this could backfire. But here’s the thing: even if Microsoft, Google, and Amazon decided to completely square off with Snowflake, it would likely create the “cloud lock-in” that enterprises want to avoid. (Still, it’s a dynamic to watch…)

Today, it’s clear that Dageville and Cruanes read the tea leaves when it came to cloud migration – taking advantage of what was then an untapped opportunity. Now, it’s a mad dash for enterprises to get on board, as Snowflake’s current CEO, Frank Slootman, addressed in an interview with CNBC:

“The thing that attracted me hugely to Snowflake was that the data wars are starting anew. In the 80s and a good part of the 90s, Oracle and Microsoft and a whole bunch of other companies [were] fighting it out over who was going to own the database platform. Because of the cloud, and the movement to the cloud, that is now starting again. Things are up for grabs. But this time, data is 1,000 times more important to the economy than it was 30 years ago because data is literally powering the economy.”

2. Pricing is based on utilization, instead of the typical SaaS subscription model.

If there’s one recurring theme in Snowflake’s story, it’s that the company has challenged preconceived notions of what a data warehouse should be, and how it should be priced. Usually, SaaS companies operate on a subscription-based model, entering monthly or year-long agreements with customers. And, as is the way with most things, there are pros and cons that come with this. While there’s the benefit of steady recurring revenue for the business, customers are usually choosing packages or tiers based on anticipated needs. Which means customers can wind up either paying for services they don’t use, or realizing they actually need to upgrade – two things that are equally frustrating.

So, Snowflake went with a utilization model, which focuses on users’ actual consumption. Remember earlier when we mentioned the separation of storage and compute? Those are the two pillars of Snowflake’s pricing. Compute is charged based on processing units (which Snowflake calls “credits”), and customers only pay for what they use. Storage is billed separately.

But why is this so appealing?

For customers, pricing is more flexible and straightforward. Credit use, per hour, depends on the size of the virtual data warehouse (with eight sizes to choose from). If queries aren’t actively running, customers can shift a warehouse into “suspend mode” to temporarily stop charges. Whenever the time comes to run a new query (using the same data warehouse), it automatically restarts – without delays, manual re-provisioning, or unnecessary costs.

This utilization approach also piqued Frank Slootman’s interest in Snowflake. He’s been clear on his skepticism of the SaaS model, saying he believed it, “wasn’t equitable to customers.” While on CNBC’s Fast Money Halftime Report, Slootman called Snowflake’s pricing “completely analogous” to the cloud model, saying he believed this will become the new market norm in the years to come.

3. They doubled-down on Account-Based Marketing

In 2018, Snowflake grew its customer base by 300%. That’s a mic-drop metric. But it takes more than having a best-in-class-product to hit those kinds of numbers. It takes a savvy marketing and sales strategy – which for Snowflake, meant putting a greater emphasis on account-based marketing (ABM).

An ABM approach creates alignment between the sales and marketing teams. Rather than putting out blanket (or “one-to-many”) messaging, marketing works closely with sales reps to create personalized ads and content for target accounts that fit their “ideal customer profile.”

So how did Snowflake execute this strategy so successfully?

Here are the basics: Snowflake was targeting enterprise companies using legacy, on-premises solutions that were showing an interest in moving to the cloud. The whole process was extremely data-driven. Account intelligence was created in an open-source format so it could easily be shared within the company, which helped secure internal buy-in. Snowflake then leveraged machine learning (using the business analytics platform Everstring) to analyze its 50 fastest deals and its 50 biggest deals to find like accounts.

“Instead of using our preconceived ideas around industry categories, we let the data speak for itself.”

At the time, Snowflake had only 30 sales reps, who were each given 100 accounts. Sales territories were based on geography, which was in part to help prioritize face-to-face meetings (before COVID-19, of course). Out of these 100 accounts, 10 would be chosen for completely tailored, one-to-one messaging.

Too often, marketing, sales, and customer support teams function independently of each other even though they’re all working toward the same endgame: to accelerate revenue by attracting and retaining customers. Snowflake’s success stems from this singular focus, as Denise Persson, CMO at Snowflake, noted:

“In my experience, the more teamwork there is between sales and marketing, the faster you can make the right decisions and execute. While there are certainly some operational distinctions between the two functions, they share what ultimately matters most: the goal of winning the hearts and minds of customers. What’s more, they need each other to succeed, and that makes them natural partners.” – Denise Persson, Snowflake CMO 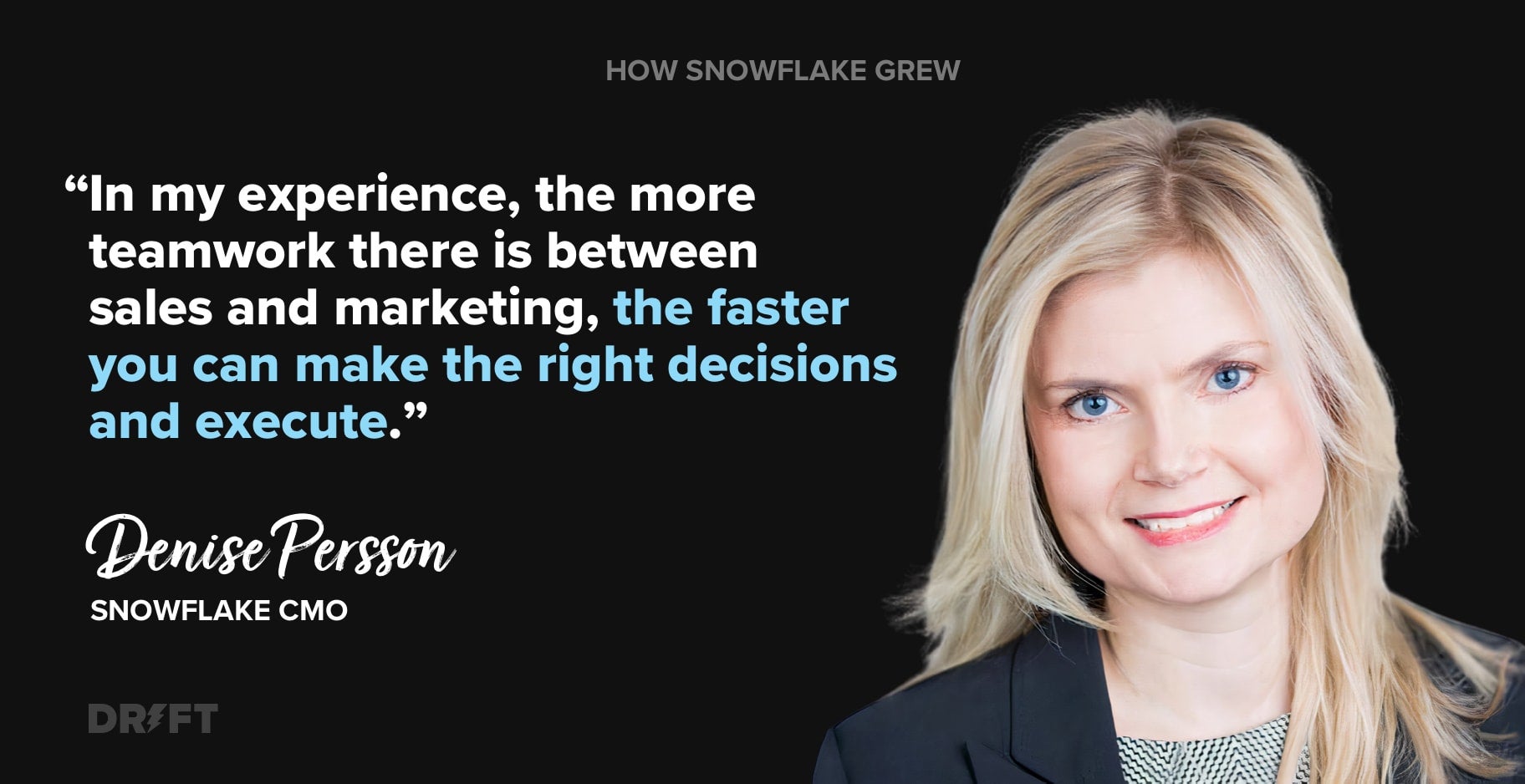 Clearly, this synchronized, data-centric approach paid off. Not only did Snowflake’s customer count skyrocket, but the sales team quadrupled based on this growth and demand.

Rachel Haley saw Snowflake explode from 30 to 450 reps. Here’s how she ran sales operations inside a hypergrowth company.

4. They made strategic management changes to go public.

Bob Muglia was a Microsoft veteran who became Snowflake’s CEO in 2014. And he did well. In his five-year tenure, Muglia helped supercharge growth, raking in $263 million and then $450 million in separate funding rounds. Then, in 2019, it was announced he was stepping aside.

Eyebrows were raised. Even more so when people realized Frank Slootman was taking Muglia’s place.

Slootman is known for being a legendary CEO and a kind of IPO soothsayer. When he was CEO of ServiceNow, Slootman led the company to $1.4 billion in sales – up from $100 million – in the six-year span between 2011–2017. Before that, Slootman was CEO of Data Domain, which had a similar millions–to–billions trajectory under his leadership.

Slootman had been happily retired when he got the call from Snowflake – and the appeal of the company was just too much to pass up (which is certainly saying something). Slootman saw how data was now powering the world economy. Today, it’s a race among businesses to not just have the most data but to decipher the right meaning from that data. Slootman knew Snowflake was a key player in enterprises’ move to the cloud. 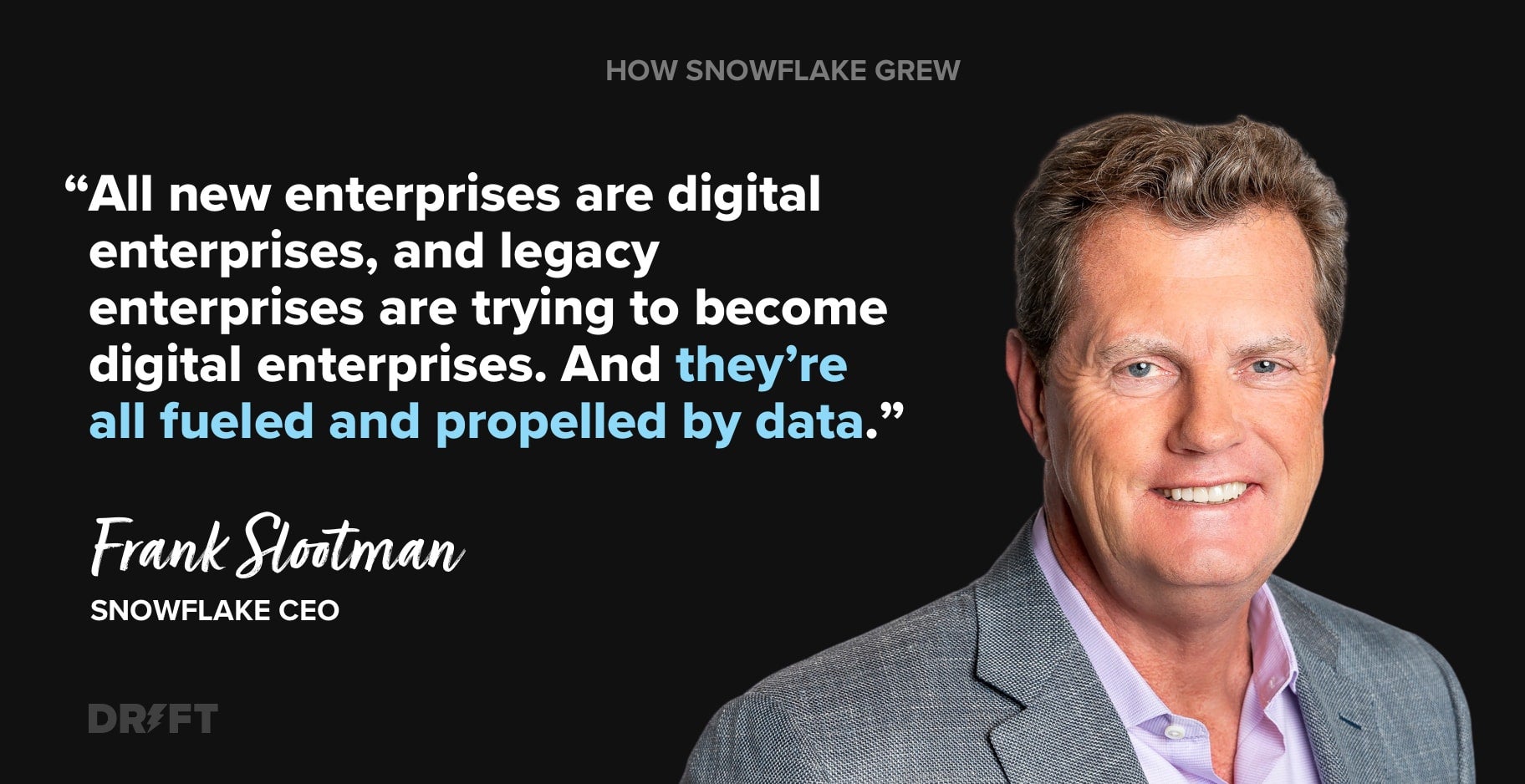 There’s no doubt that Muglia helped Snowflake get to where it is today. He guided the platform out of stealth mode in 2014, and clearly was able to accelerate the company’s funding and valuation. But Slootman was the ace in the hole when it came to going public, and as we know, he didn’t disappoint.

“At the time, replacing Bob Muglia for Frank Slootman was the right choice, albeit controversial. While Muglia was beloved, Slootman is considered a consummate pro, capable of enabling the company to go to new heights. Slootman has the playbook for taking high-growth companies public; he executed his strategy perfectly. This included bringing in his own lieutenants at key positions (like Mike Scarpelli as CFO, formerly with Frank at ServiceNow), reorganizing their sales teams, and putting a big focus on migration solutions.”

So, that’s the story of Snowflake, a San Mateo, California-based company that caused a fundamental shift in the data warehousing industry. As we can see, Snowflake didn’t strike gold accidentally. The company was committed to solving the problems of on-premises solutions and wasn’t afraid to go against the grain when it came to “how things have always been done.” This is why everything from its infrastructure to pricing model has become a key differentiator.

It’s definitely one to keep watching.

Want to drive Snowflake-level growth for your business? Start here. 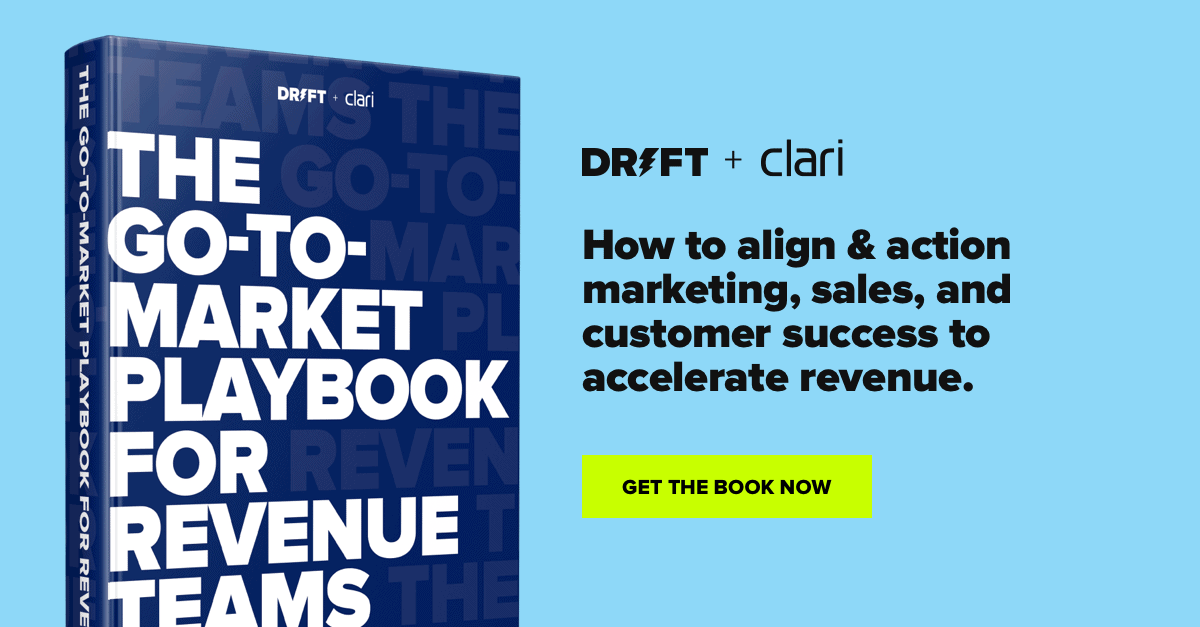 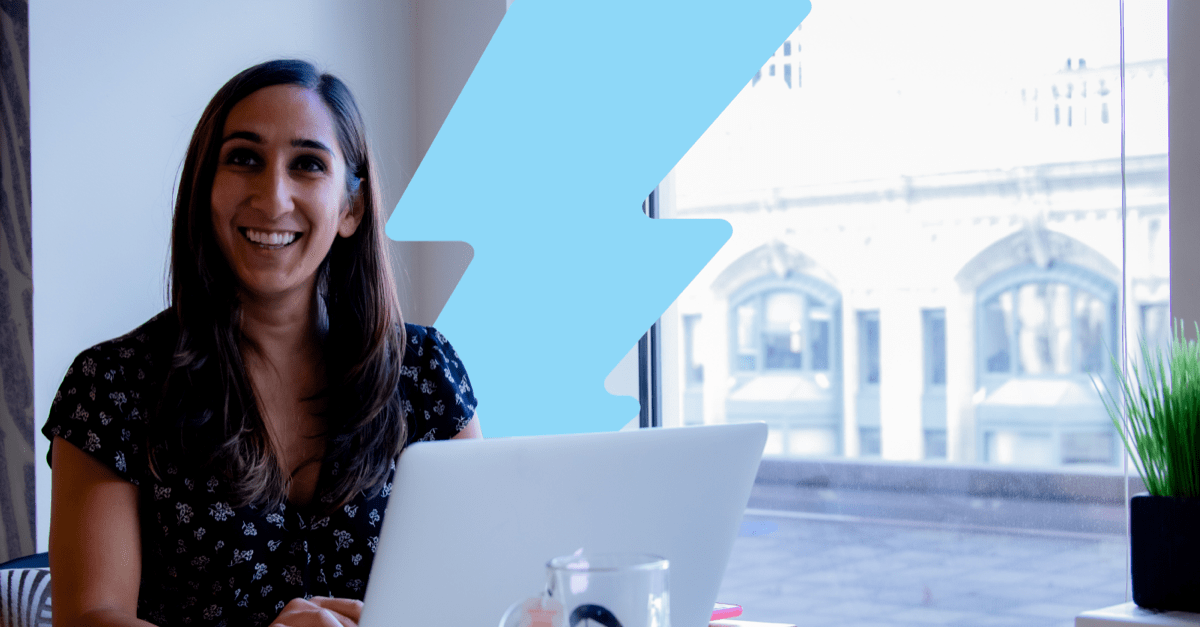 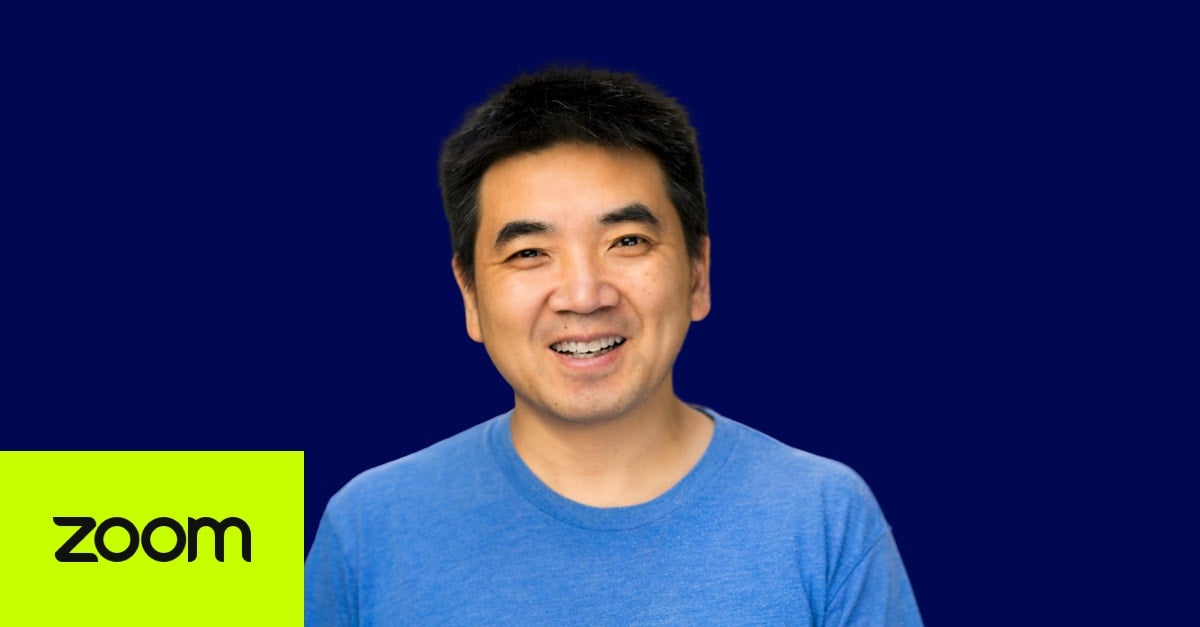 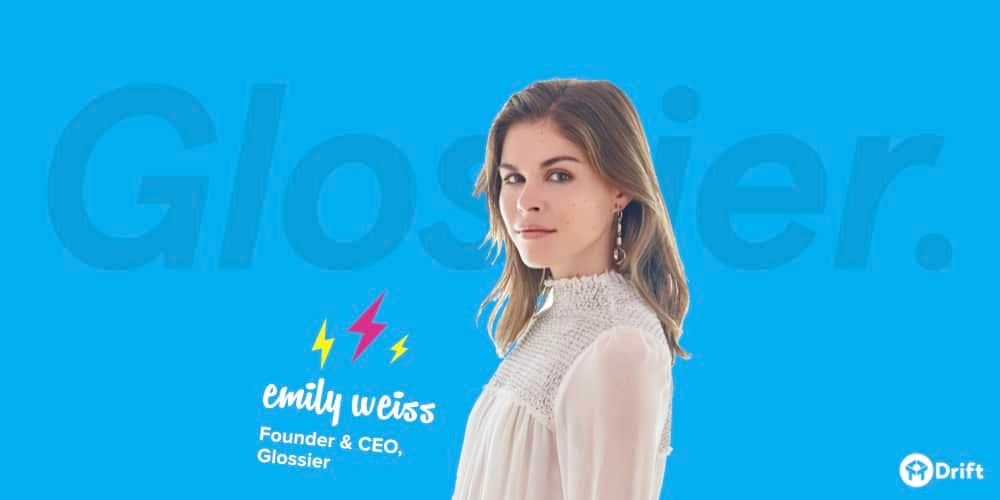 How Glossier and Its Army of 1.8 Million Instagram Followers Are Conquering the Beauty Industry
See More