Don’t Make This Mistake When Selling to the C-Suite

And in comes the CEO.

You’ve finally made it.

Now, you know that they’re the main decision-maker for this sale. You’ve done your homework, and you know what they say goes. But so many sales reps get to this point and don’t know what to do.

That’s why I spoke with Devin Reed, Head of Content Strategy at Gong, to talk about the mistakes I see again and again, plus advanced tips on how you can get a “Yes” from senior executives.

If you want to watch our presentation, click here. Otherwise, keep reading for all the insights 💡

…is defaulting to discovery call mode.

If you’ve made it all the way to a C-level meeting, then you’re not starting from zero. Don’t treat it that way.

It’s counter-intuitive, I know. In my sales enablement role, I’ve spent more time training and working with reps on discovery than probably any other fundamental sales skill. But don’t confuse good discovery with a lot of discovery.

That’s because there’s a correlation between asking too many discovery questions and your close rate, at least when the C-suite is involved. 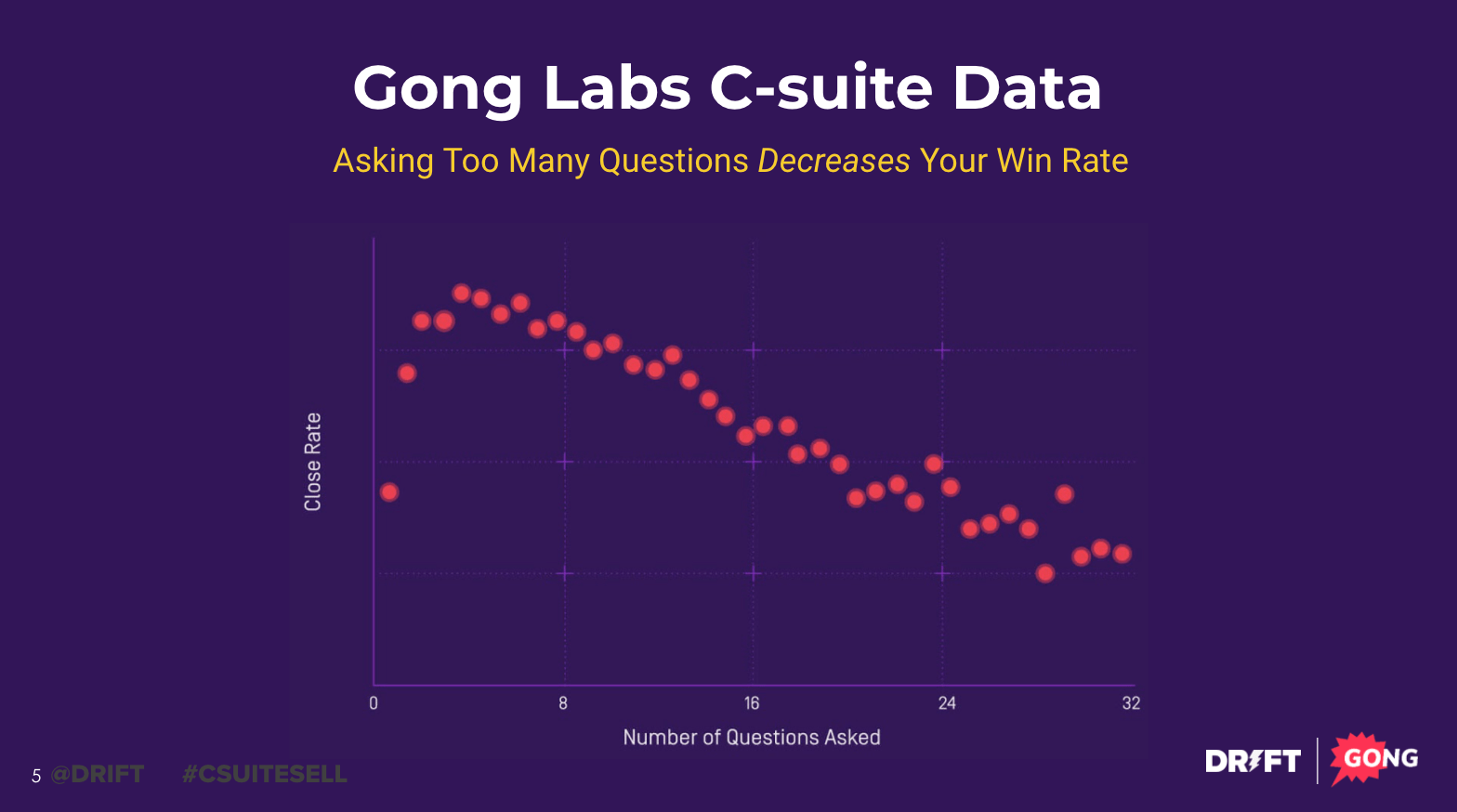 When you ask questions to a senior leader, you should be asking questions only that person can answer.

If anyone else in the org can answer it, then you should have talked to them instead. You’re just wasting time and energy by not having done your homework.

The more questions you ask, the more likely you’ll invite discovery fatigue. Because constant Q&A just feels like a tennis match.  And the thing with discovery fatigue is, you can’t just throw someone a Gatorade and they bounce back. Once they’re fatigued, they’re done.

Your meeting with a senior leader should be a conversation. Balance the questions you have throughout the meeting, using customer stories, context, and other information to make it conversational.

When you ask somebody a question and they respond, you can say, “Oh, you know what? I was talking to someone else two days ago and they were saying the same thing. You know what else they said? They also said [here’s where you insert other examples of common pain points]. Are you experiencing that as well?”

Use your champion for discovery time

If you’re going into a meeting with a C-level executive, someone internally helped make that happen.

Your champion is the person you should sit down with before that C-level meeting.

That’s because as a seller, if it doesn’t work out for you, you’re going to walk away. It may sting, but you’ll be able to walk out of the room and go on with your life.

But your champion? They’re sticking their neck out for you. Nobody wants to waste their boss’s time.

So don’t waste it! Before your meeting, run through your presentation with them. Ask:

There’s always going to be something that surprises you. Once, I spoke with a champion who arranged an onsite meeting with the COO of a public healthcare company. I had the presentation ready to go – and I was feeling pretty confident with the mobile app solution I was ready to sell.

But the thing I didn’t know was that the executives were actively trying to find ways to keep employees off their cell phones at work. They literally had employees put cell phones in lockboxes before punching into their shifts.

My champion looked at me and said if I led with that, the deal was dead on arrival.

That mobile app was one of the solutions that usually got oohs and ahhs. 9 times out of 10, it would win us a deal. But in this case, it would have been the thing that lost it.

5 Advanced Sales Tips to Get to “Yes”

Okay, so now that you won’t make that mistake again, let’s talk about what to do instead. Here are five ways you can get to “yes.”

1. Understand the difference between role and title

In sales, we’re always taught, “Get to power as quickly as possible.”

That’s not wrong, but it misses the nuance of what sales really is.

Power doesn’t necessarily mean title. What role does this person play in this situation? Are they the approver, problem-solver, or something else?

You might not even need the C-suite to say yes to the problem you’re solving.

If it’s a problem on this C-suite’s table, it means nobody else could have solved it. We’re talking multi-million dollar problems. A CFO is going to say, “I’m not paying $300,000 for anything that doesn’t positively impact at least two departments.”

You’ve got to know what you’re solving, how much impact it has on the business, and how that maps to who you need to talk to.

Instead, understand the difference between role and title.

Do you know what a VP does?

Well, if they’re a VP in a 30-person startup, they’re much more hands-on than a VP at a 50,000-person company. You need to know what they care about.

This can vary wildly even among people in the same company. You may have two VPs and one of them is all about working with their team in the trenches and the other just wants to know the solution is handled. You need to find who is going to care about your solution, not just as a business leader, but as a person. Are they angling for a promotion? Could this be what makes them the hero of their organization?

Think about your internal processes. Your CRO or CSO probably trusts the sales and marketing teams to solve their own problems. But if they’re going to cut an $80,000 check, they want to understand the costs, business outcomes, and timelines. 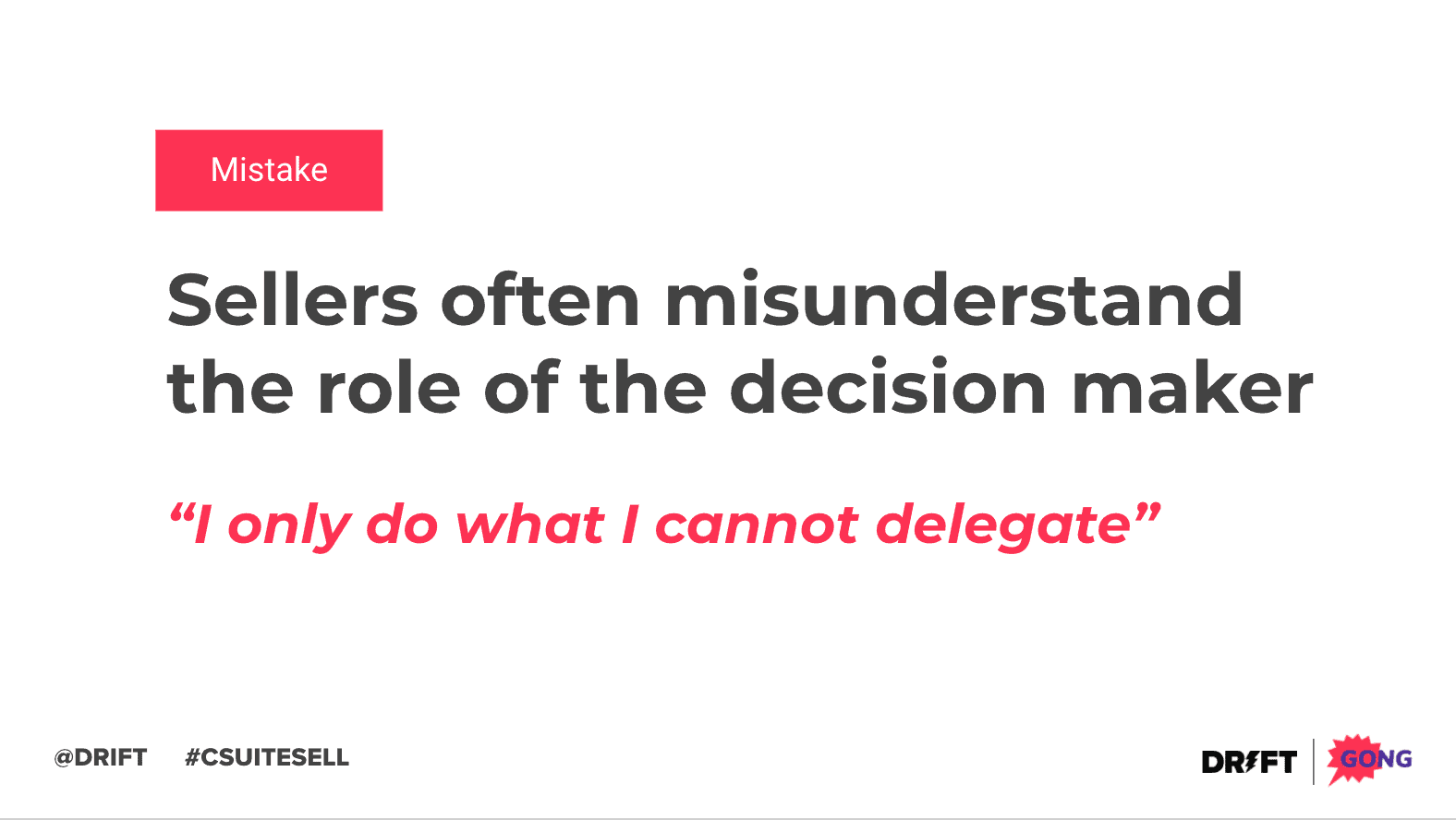 Sales reps often miscalculate the willingness of a C-suite to overrule their team, too. My experience has been that even C-level executives, especially the ones you would want to work for, are the ones that give autonomy to their leadership that reports up to them. They’re going to turn around and say, “Well, what do you all think?”

I was in a sales meeting earlier this year with the CRO of a security company. At the end of the meeting, he said, “You prepared an ROI and it looked good, but it always looks good.” He turned to his VP of Demand Gen and said, “Whatever happens, will you own this number?”

That was a light bulb moment for me. When I think about the role of the decision-maker, they’re not going to pick apart the numbers. They’ve been around the block enough to know that the numbers are always going to look good in a sales presentation.

If there’s an elephant in the room, you need to introduce it. Say, “I’m going to pause here. It sounds like this isn’t resonating with you. What am I missing?” Or, “It sounds like something’s missing from your expectations,” and then be quiet. Someone will fill the void and give you something you can work with to address.

If you don’t, as soon as you end that Zoom meeting, it’s the first thing that people are going to talk about, and then you’re not there to handle it. It’s much better to bring it up and try to control that conversation while you’re in the meeting than do damage control later.

When you sell to the C-level, you get one shot.

In the first three minutes, they need to know why they’re there. Otherwise, they’re already tuning you out, thinking about the next meeting. You’ve lost them – whether they’re physically in the room or on Zoom.

You should set expectations upfront by saying, “I asked you to join this call specifically because of XYZ. Now, it’s time to get your input and make sure we’re on the right track.”

That way, you’re not going to get 15 or 20 minutes into a call and get crickets after saying, “So, what do you think?”

Then, it’s your job to match the talk track to the things (and more often than not, the metrics) the persona actually cares about. That usually boils down to three outcomes:

You need to be able to speak their language. And it might be that you’re not the right person to do that.

It’s rare that an individual sales rep is going to be the most equipped person to handle every conversation in complex enterprise deals. That’s why you need to tap other people on your team – solutions consultants, internal leaders, even engineers – to be as effective as possible.

One story that’s always stuck with me is when John F. Kennedy toured NASA in 1962. He went around the facilities, met with all kinds of leaders, but at the end of the day, he asked the man sweeping the floor in the lobby what he was responsible for. The man said, “I’m putting a man on the moon.”

That’s a great example of how the vision had been articulated to everyone. Sales reps need to have that same ability to zoom in and out, connecting the overarching solution to everyone’s role in the organization.

4. Speak to everyone in the room

You need to speak to each person and what they care about at the right time.

Let’s say there are four managers, two directors, and a VP or C-level in your final meeting. Because there are more managers in the room, reps often say, “Well, I’m going to speak to the volume, the managers, because that’s who’s the majority,” when really you need to speak to the highest person in the room. You should have already convinced the managers and spoken to their pain points.

Now is your one shot to convince the highest person in the room that you should matter to them.

Amanda Chiang, an AE here at Drift, does this so well. She summarizes the impact on each person in the room, one at a time, like this: 👇

She does this up the chain of people in the room so that they can all see the impact on an individual and business level. It goes from, “I thought this was a small problem on one team,” to, “Wow, this is really affecting our organization from top to bottom.”

That’s the kind of thing that commands a C-level executive’s attention.

5. Tell them why they should say “No”

To get to yes, you need to tell them all the reasons why they should say no.

But saying, “Hey, here’s where things go wrong during rollout,” gets ahead of any concerns. By the time you’re mid-funnel, people have invested time, energy, and interest. And if they’re going to say yes to you, they need to know where things can go wrong and how to avoid it.

Nobody expects you to be perfect. Nobody expects you to have never lost a customer. It builds trust and credibility to have an honest conversation over the ways this has gone sideways in the past. Say, “Of course there are people who don’t like us. That’s why we analyzed what happens and why. If you do these things, you’ll likely fail too, so let’s talk about it.”

Salespeople want to be consultants, but guess what? Consultants give you the pros and the cons. If you only talk about how great your product is, you’ll never build the trust you need to get to yes.

That’s how you go beyond just getting a “Yes” and building a business relationship that’s based on trust.

Drift asked seven sales leaders what it takes to open and close a deal. Learn what they had to say. Download the free guide now 👇 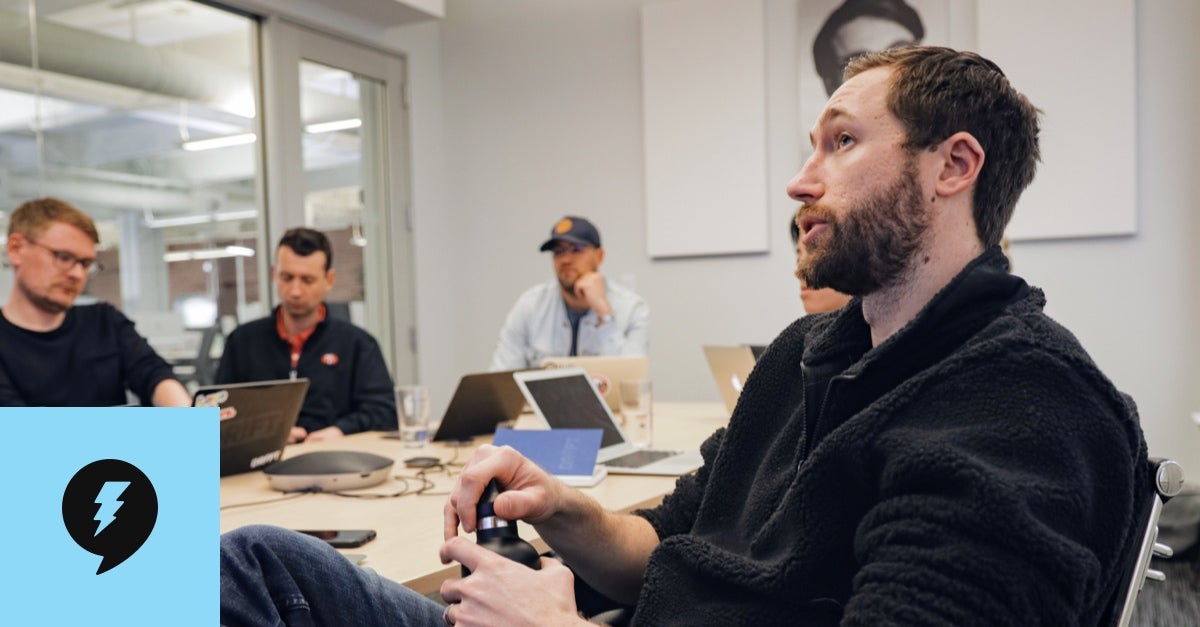 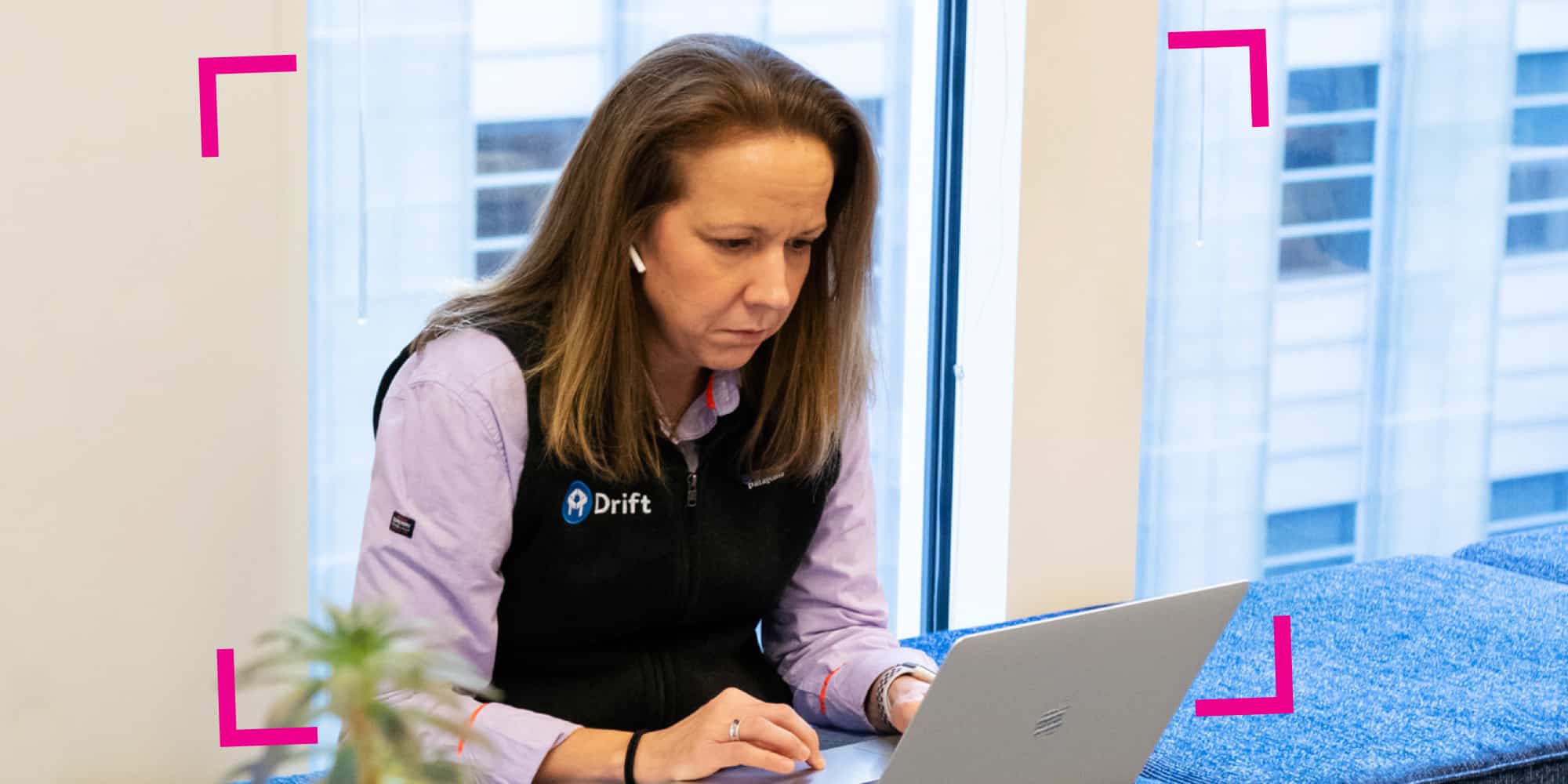 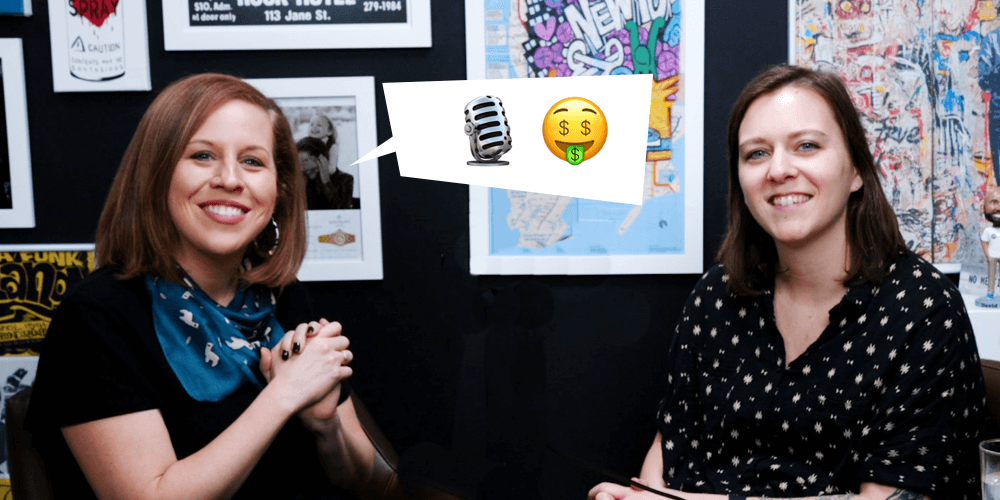