There’s a reason why classic books like Ogilvy on Advertising and Influence have stuck around for decades. At their core, these books are about human psychology. And as much as we’d like to think otherwise, humans haven’t changed all that much.

That’s what is so interesting to me about marketing. The psychology behind it all. As an engineer by trade, I had to teach myself marketing. I wanted to know how people make decisions, so I started by reading every book I could find on decision-making, cognitive biases, and social psychology. Then I moved on to copywriting because I wanted to understand what does and doesn’t work. After that, I zeroed in on how we think about marketing from a brand standpoint.

Fast forward many years and five companies later, and my focus on marketing, human psychology, and storytelling has shifted from a purely external exercise into a vital internal center of gravity for Drift. It’s not only crucial to the way we connect with our customers, but it’s also become almost a secret sauce for how we grow, evolve, and tackle challenges as a company.

Below is an excerpt from my interview with First Round Review where I share five core lessons for building an internal culture around storytelling (read the full article here). I’d love to know what you think – drop me a comment on LinkedIn or text me at +1-212-380-1036.

Lesson #1: Adapt Your Story to (Asynchronous) Film and Focus on Internal Training

Alongside their conversational marketing and sales platform, the Drift team has cultivated a community with Drift Insider, a free, on-demand online forum with classes, videos, and exclusive content. “It’s basically like Masterclass for marketers and salespeople,” says Cancel. “It’s a bunch of courses and videos that we’ve created internally and with third parties, but it was first built for internal use, all around this type of training that we put everyone who joins the company through — we try to teach a lot through internal video courses.”

Here’s how it got started: “In the early days of Drift, I was using WhatsApp all the time. It was easy to record and send videos quickly. And so I started to communicate to my senior leadership team mostly asynchronously through video and audio messages. First, I noticed that it allowed me to really think through what I was saying, versus just getting in a room with someone or having a back and forth in text messaging or a phone call,” says Cancel. “But second, when I created this artifact, obviously that could then be shared. And it was the sharing aspect that really made it an effective tool for us — all of a sudden we had old videos on different topics that we could share with people who were starting their journey at Drift in their onboarding process.”

During onboarding, everyone — not just those in marketing — goes through training, not only on what our story is, but on how do you tell a story? How do you give a presentation? How do you write copy? What are cognitive biases? How do people make decisions?

This form of internal storytelling led the Drift team to create a platform and then ultimately offer it as a product because they were using it so often. “If we have a problem, we’d make a quick video on what we sucked at, how we fixed it, the results, and what we learned. We’d share it with the team or make it part of onboarding,” says Cancel.

“Nowadays, the executive team uses it all the time, but one of the teams that probably uses it the most is the product and engineering team. They have videos about everything that they do, from new releases, and problems that they’re working on, to all their meetings. And so embracing that asynchronous nature of communicating and having that artifact that we can store and share with other people over time has really helped with onboarding, getting everyone focused, and helping folks understand why we were making decisions, giving us an ability to be transparent in a way that we couldn’t before.”

I would say our internal asynchronous communication is 80% video, 20% audio — it’s been massive for us. For me personally, it’s greatly reduced the number of meetings I have and increased the quality of my feedback.

While these good storytelling habits are well-established, Cancel is quick to admit that the Drift team is still building this muscle. “We continue to live that and try to push it — but that doesn’t mean that we’re great at it. It means that it’s constantly an activity that we have to focus on,” he says.

For Cancel, this consistent focus brings a metaphor to mind. “I compare it to growing an English garden. The garden doesn’t get built by just planting the right kind of plants. 99% of the work is pruning. It’s the same with trying to keep storytelling a focus. It never ends. There isn’t a shortcut. We just drill it and make it a ritual,” he says.

“Pruning is always the painful part for me. Take this example: We just hired a new VP of product marketing. And so right now, it’s been about zooming in and just tearing apart how poorly of a job we’ve done in specific product marketing work so far. That sounds simple, but it isn’t easy because folks on our team have worked on that stuff. And so you’re jumping in and trying to be helpful, but it’s hard for people not to feel that in their egos, that shock of, ‘This is how bad we suck at X, Y, and Z.’”

The only path to growth involves discomfort. It’s easy to say, “I want to grow and learn,” but nobody wants to go through the uncomfortable part.

That’s the kind of work that often gets skipped over, particularly when scale sets in. “When we’re all under the stress of trying to build something, or we’re under a deadline, that’s the easiest time to give up, take the shortcut, follow conventional wisdom, or just repeat something you did before. There’s a tendency to reduce things to the most scalable approach, which means checklists and best practices — we call them ‘plays’ internally,” says Cancel.

“And I found that we got to a point where no one was questioning any of the plays. No one was thinking about how to reinvent the process. They were just following the plays and completing checklists as quickly as possible. They cared about their work, but it became more about hitting the deadline and not about, ‘How do we make this better?’ Or, ‘Why are we doing this?’ Or ‘There’s a message that worked last time, but will it work again?’”

It’s situations like these where leaders need to step in on the storytelling front, Cancel says. “I think a lot of my job has been over the years as an editor. I’m obviously not doing any of the work or a pretty small amount of the work, but I serve more as the editor of the voice — how we can get better on it, where we say it’s not good enough, where we push back and say we can do a better job.”

Lesson #3: Lean on Inversion and Spotlight the Hero’s Journey to Create Compelling Stories

When asked for the storytelling techniques that have most influenced his skills over the years, Cancel offered up two: the practice of inverting, and sticking to the hero’s journey. We delve into each one below.

“When it comes to being able to tell a story, we practice this technique of inverting everything, which we again learned from Charlie Munger. I love Munger because he simplifies everything. At its simplest, it’s just about starting backwards,” says Cancel.

“For the example he uses, he asks his kids, if someone won the world champion title at the age of 20 and then they won again at the age of 75, what was the activity or sport? And some of the kids couldn’t figure it out, but his son started backwards — or inverted — and said, ‘Okay, if they won at 75, it can’t be a physical activity or require a high cognitive ability.’ And then he started to tick through the options. ‘Could it be chess? No, it’d be hard to be a grand champion in chess at age 75. But what’s close to chess? Checkers?’ And that was the answer. Instead of starting forwards with all of the sports and ruling them out, he inverted and focused on what would have to be true for the answer to be correct.”

But how has the Drift team applied this concept in the realm of software? “Our very notion of what we do as a company is that we’ve inverted,” says Cancel. As he’s previously written, Cancel and his co-founder Elias Torres followed Munger’s advice when starting Drift:

“We were faced with the question: How would we stand out as the 6,830th product in the MarTech space? We looked for a common trait among all the products laid out across the MarTech landscape and found they all helped companies sell more. The vast majority were started in a time where the seller (the company) had all the control. They could focus inward on helping their own customers, also companies, sell more. They didn’t have to focus on helping would-be buyers. But Drift was built in 2014 — a time when the power was shifting from sellers to buyers.”

Cancel expands: “Everything that we do at Drift, because we believe that’s true, starts with the buyer perspective — not the company perspective, not the sales rep perspective. And so it’s a fundamentally different way to start to build marketing and sales software, and tell that story.”

Plot out the hero’s journey.

Beyond that initial company focus and origin story, Cancel and team have looked to other corners for story structure inspiration. “We started to study the simple things that everyone knows in terms of storytelling, most of which comes from writing screenplays. Take the hero’s journey from Joseph Campbell and its different archetypes. When we started our podcast, I was trying to figure out, ‘What are our characters? Who are we?” he says.

“Not that we are actually characters because it’s 100% us, but rather, what do we need to emphasize so people can identify with this character? My co-host Dave was kind of a young marketer and it was more of a mentor-mentee relationship. And so my main character was that of the sage — I’m the old man who’s got a bunch of stories and is trying to teach this young hero who’s on the beginning path of his journey all of these lessons that I’ve learned,” says Cancel.

“So those were the two archetypes that we emphasized. It didn’t mean that we were acting, but we knew that we had to follow a sort of story pattern for people to develop empathy or connection with us. And it’s not just the podcast. We also do that in stories that we tell or in copywriting — we’re always trying to figure out the hero’s path.”

Want the other two lessons? Access the full interview with First Round Review here. And if you want more from DC – make sure you’re subscribed to Seeking Wisdom. New episodes come out every other Monday. 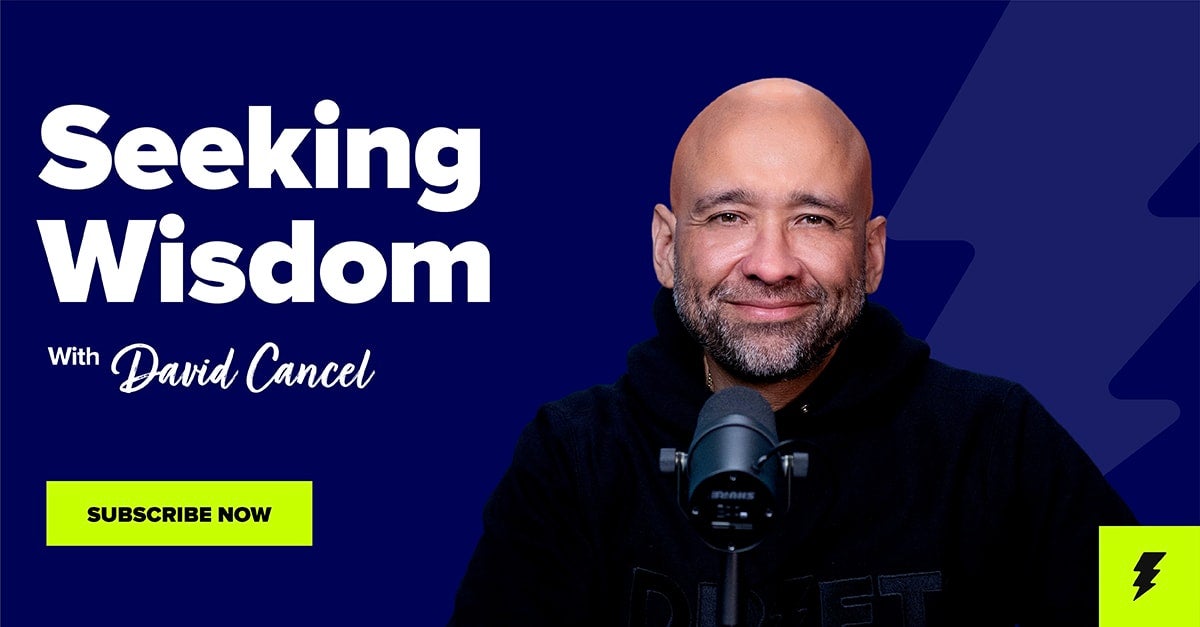 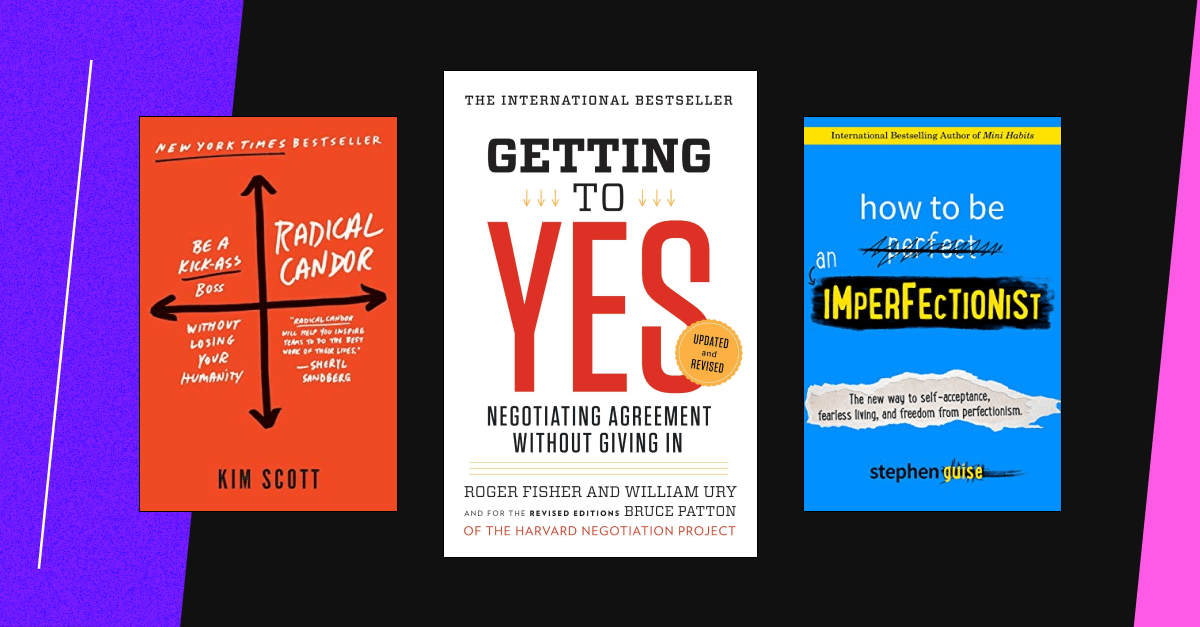 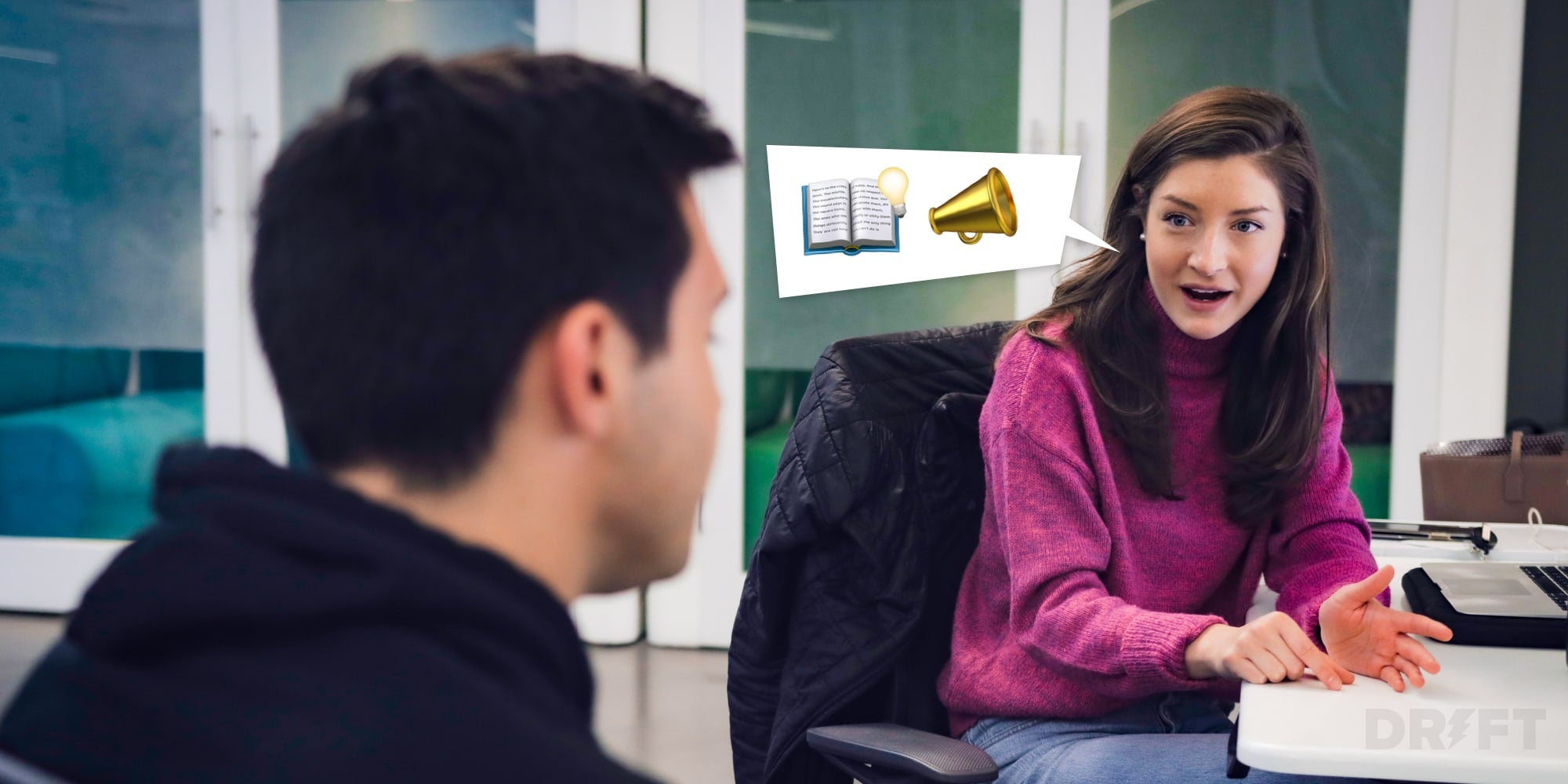 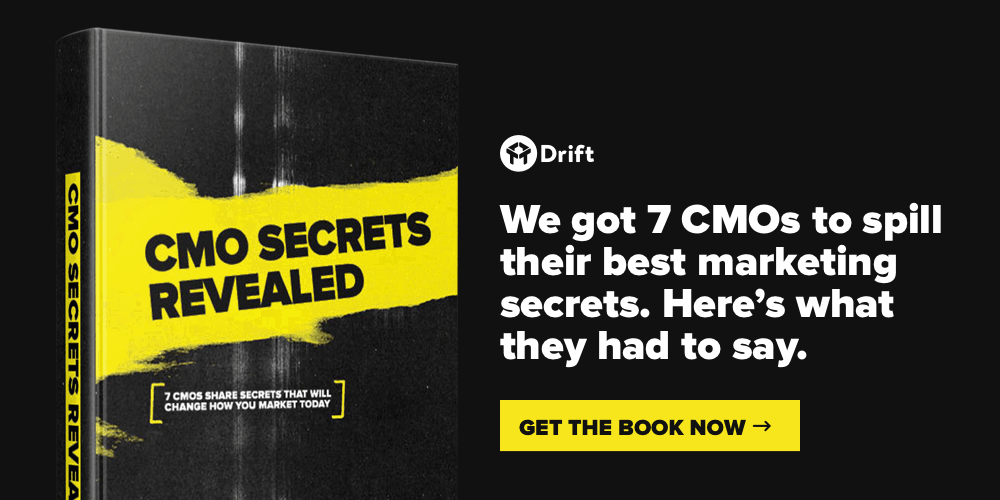