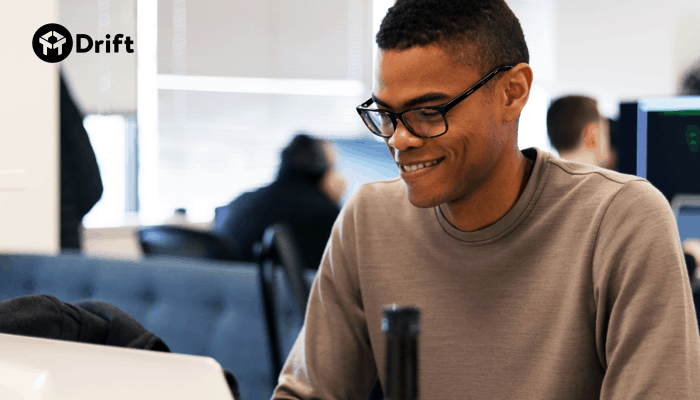 Maybe you saw our LinkedIn video take-over last month when 100 of our employees posted LinkedIn videos about Drift for Email Marketing.

Or maybe you saw someone share our countdown clock landing page to tease an upcoming product launch.

Or perhaps you read this blog post by Elias Torres, about how to break away from your competitors with something we call “Marketable Moments”.

Regardless, by now you can probably tell that we take product launches very serious at Drift. So much so that we launch a new product every month.

But this isn’t an ego trip – it’s a promise we made to our customers: that every month we’ll give them a new product.

These Marketable Moments are a company wide effort, but it’s my job to organize the elements and make sure it’s a massive success.

In the last six months, we’ve had amazing results with our launches, besting ourselves month-over-month in traffic, lead generation, and product adoption.

In doing so, we’ve developed a reputation for making a lot of noise when we launch. And that’s something a lot of people tell us is high on their list of priorities both in terms of product marketing, and beyond.

? That’s one of my favorite tweets about our marketable moments. We do Linkedin and Twitter pretty big on launch day.

But the buzz we generate isn’t accidental. Behind the scenes, there’s a ton that goes into making this happen.

And that’s what I want to talk to you about today.

In fact, I’m going to let you in on the 5 secrets from Drift’s product launches. Because the level of success we’ve had here shouldn’t be something we keep to ourselves.

Follow the advice below and you’ll be on track to repeatedly set records in site traffic, drive new leads, and close more deals with each launch without throwing more dollars towards AdWords or Facebook Ads.

1) Make your product launch more than one day

When you think of a product launch you probably think of a one-day time frame. Maybe it’s at an event or you write an announcement post on your blog, and call it a day.

But there’s really no reason your product launch needs to be one and done. After all, you put a lot of work into building it – why not make it a week?

Or better, why can’t it be a whole month?

At Drift, we organize our announcement and the core activities around one date, but we follow-up that week and that month with more content, more activities, and more promotion.

One of Drift’s investors gave us some awesome advice:

Think of your product launch like a book tour.

And it’s a really great mindset for product launches. Think about an author who publishes a book:

She goes on a tour to promote it.

She’s on the morning TV show.

Then on the PM radio show.

She’s on podcasts, writes guest columns, and blog posts. She’s everywhere and all you keep hearing about is her new book. And now, you just have to find out more.

That’s what you should do with your product launch.

And before you say something about the effort involved to get featured on a podcast or something, I’m going to be straight with you: There are thousands of podcasts, tens of thousands of blogs –and they cover every topic you can think of. You can find a new audience to promote your launch.

When we launched Drift ABM back in November, we announced on November 7th, but that doesn’t mean we centered all our activities around that one day.

Here’s a schedule for the month of November with some of the big activities that followed the launch. 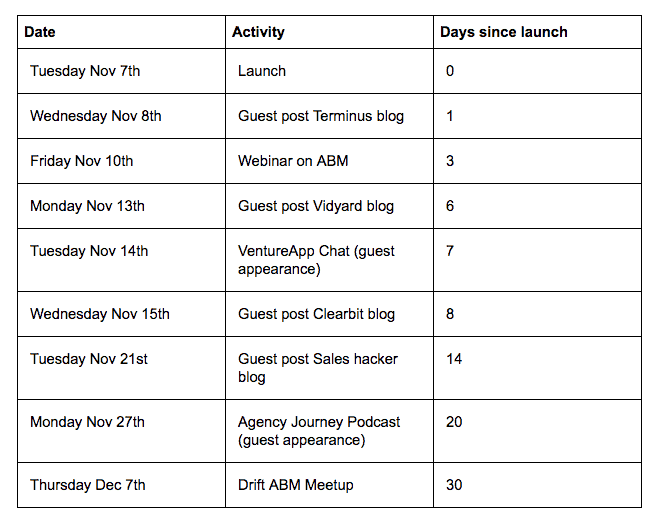 You’ll notice it’s a wide range of activities, from blog content to podcasts, to meetups and webinars.

Think about that book tour concept.

That’s what we try to do with our product launches, all month long.

2) Build an army (or navy) of supporters

Every company and every product has raving fans.

Bring in your fanboys and fangirls, happy customers, advisors, investors, friends of the company, and your entire inner circle.

Give them briefs before you launch and ask them to join your webinars, write guest posts, comment on product hunt, tweet, post, or scream from the mountain tops.

We have an Insider Network (formerly known as the Drift Navy) that we work with before our launches.

The Moneyball Marketer is Zak Pines. He’s the VP of Marketing at Bedrock Data and an ABM expert.

So when we launched our ABM product a few months ago, we asked Zak to write a post on his blog about it.

We briefed him on Drift ABM a month ahead of the launch and he published a blog post about Drift ABM the day we launched.

3) Learn from other company’s product launches

It’s obvious… but do you actually do it?

Do you have a swipe file of screenshots and notes from things you’ve seen, stories you’ve heard, products you’ve discovered, or emails you’ve received?

I talk to other marketers as often as possible and I ask this question a lot: what company’s marketing do you follow? Who do you regularly learn from?

I often hear as a response… “ummmm, I don’t really do that”

And that’s a huge mistake.

Because whether you’re Nike or a seed stage startup, you can learn from what other companies are doing. We have baked the “learn from the best” motto into our marketing team’s principles.

Marketers at Drift each have “heroes” we want to be like.

Here are two of mine:

When it comes to product launches I love what Appcues does with messaging and web design. Clear, simple and doesn’t make me overthink it.

With Invision I love their uniformity of message across all channels, their videos, and how successfully they communicate the value of their products.

With both of these companies I’ve borrowed ideas and put those into play on Drift product launches.

I pay attention to all product launches. Especially the greats. Like Apple.

Their design and copywriting is unmatched. It’s truly amazing (if you nerd out to great advertising like we do at Drift).

But how does this help you get more attention during a launch? Well, at least 90% of the 10x ideas (a.k.a. really big successful ideas) we’ve tried for our launches – like the countdown page that teases an upcoming launch – were inspired by things we saw other companies do.

And it’s a cycle. Other companies are now doing LinkedIn video take-overs since we did ours in March.

That’s one of the coolest things about working in marketing, when suddenly you’re the company others want to emulate. ?

4) Create a culture of discipline and practice

True professionals practice, test, prepare in ways that others don’t. They sweat the details.

Do you think MJ didn’t practice free throws every day?

Cause he definitely did.

He was the best of all time, but that doesn’t mean he didn’t practice the little things.

A great example of that for marketers is writing headlines.

You spends hours, days, maybe even longer writing a blog post. You re-read it ten times, make a series of edits and finally when you’re done with it, you… spend five minutes on the headline?

If this blog post was called “5 Tips For Better Product Launches” would it have caught your eye the way “Before You Spend Another Dollar On Promotion – Try These 5 Things To Grab More Attention In Your Next Product Launch” does? Probably not.

We slave over our headlines at Drift. And one of the areas where I wanted to improve when I got here was working on my copywriting.

So over the last 7 months every opportunity I’ve had to write a headline – from a blog post title to a YouTube description – I’ve jumped on.

“Reps and sets” as Dave Gerhardt likes to say. That’s how we get better.

The CEO at my last startup taught me a really important lesson on discipline.

He told me that he once was listening to an interview with a PGA golfer and he was talking about the putt he practices the most: the two foot putt.

Let me tell you, that’s crazy… statistically speaking he’s way more likely to miss an eight foot putt or sixteen foot putt, so why focus on the two foot putt?

Because it’s so easy to overthink a two foot putt.

It’s the little things we overlook that can be the difference between winning and losing.

It’s easy for us to overlook the little things in our launch.

But those “little” things, when under-thought can be the difference between a successful and unsuccessful launch.

5) Make everyone in your company an expert on the launch

Similar to practice and discipline, over-communication is vital for success. Especially when you have ten, twenty, fifty or over a hundred teammates involved, don’t be shy about communicating what’s going on to your internal team.

One of my sources of inspiration is the greatest coach of all time, Bill Belichick.

If you live under a rock or are really good at tuning out sports, Bill is not just the best coach in the history of football – but probably all of sports (yeah I said it). He’s been the head coach of the New England Patriots for the last 18 years.

He’s well known for winning, and everyone wants to know how he does it.

How does he lead his team to winning year-after-year with different and often inexperienced players?

One of the keys to his success is extreme preparation and communication.

His teams practice things other teams overlook, like special teams, ball discipline and position versatility. And they work on communicating so that everyone, “Does their job.”

Every player on his team could play another position if they needed.

When they were down two quarterbacks in 2016, they didn’t sign a one-week backup quarterback to the team. No, their star wide receiver Julian Edelman that played quarterback in college was their intended backup if the starter went down.

That’s nuts. No other NFL team would do that. Especially not a team with such a strong reputation for winning.

Every player knows the playbook inside and out and could recite it in their sleep – I bet Brady actually does.

We borrowed that concept at Drift.

Every teammate at Drift knows exactly what we’re launching every month in extreme depth: we hold meetings, share updates on our wiki and Slack, repeat meetings to regurgitate information, we even share headlines, launch timeline and follow-up campaigns.

We over-communicate everything. That’s the Bill Belichick way and now it’s the Drift way.

So in the spirit of over-communication, let’s review. Here are my five secrets from Drift on how we launch products to repeatedly break new records in marketing.

Got questions or want to chat? Hit me up team.drift.com/dan or on Twitter @_danieljmurphy always happy to chat and trade ideas.