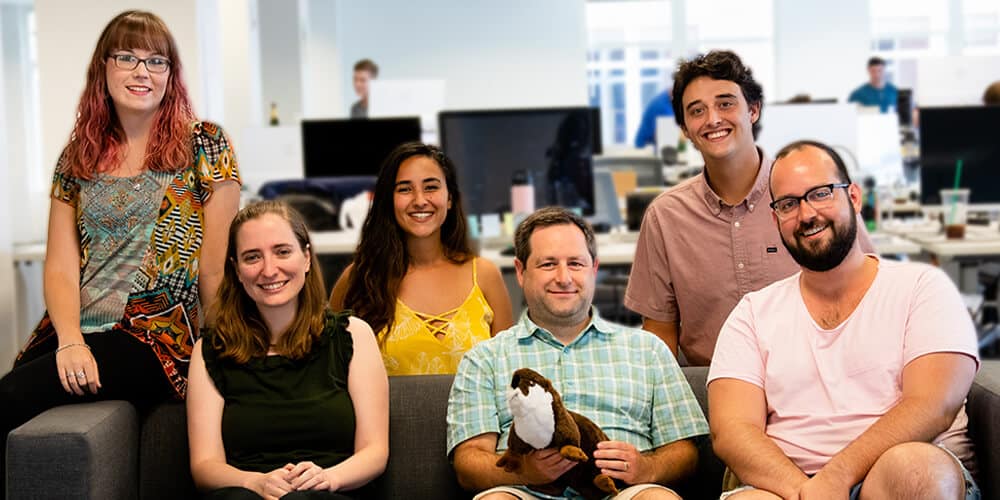 It’s a big day at Drift.

We launched Drift Automation, shared a story from a customer who has already grown their pipeline by 50% using Qualification Bot (the first solution powered by Drift Automation), and announced the acquisition of Giant Otter – a small MIT spin-off that built chatbot technology that could hold coherent, extended conversations with humans for several minutes.

There’s a lot to unpack here, so I sat down with Jeff Orkin – co-founder and CEO of Giant Otter (and Head of Data Science at Drift) to talk about his background in AI, why he started Giant Otter, and what the acquisition means for Drift (and our customers).

Editor’s Note: The following has been edited and condensed for clarity.

Molly Sloan: So Jeff, tell me about yourself. Is it true you’ve been working on artificial intelligence and machine learning for 20 years?

Jeff Orkin: That’s right. I spent a decade building artificial intelligence systems for various video games at Sierra and Warner Bros. The games I was working on sparked a new interest for me – I wanted to find out how you could get machines to converse more like humans. So that became my primary focus when began my Ph.D. research at MIT Media Lab. I built this online game called The Restaurant Game. The gist of the game was that it had two players – one was the waitress and one was the customer. It took about 10 minutes to play, and my goal was to collect the data from every session played and use it to make AI conversations more natural. I thought we’d get 100 people to play the game. But somehow it really took off, and we were able to get data from 16,000 people.

Later on, I met my co-founders and we started Giant Otter. We knew our approach was different, so we set out to build a platform that would help chatbots navigate through trickier human conversations. We developed a couple of solutions around social-emotional learning and executive coaching before realizing the best fit for us and our technology was in the sales and customer support world.

MS: What was different about the approach you took with Giant Otter?

JO: There are two ways the Giant Otter team was able to differentiate ourselves from other AI solutions in market. The first was our purpose. We weren’t interested in creating AI that could respond to endless one-shot commands – we wanted to (and ultimately built) AI that could carry on extended conversations with humans. We pioneered a unique approach to creating bots that could converse coherently with people for several minutes.

That leads me to our second differentiator, which was the approach we took when we built the AI. You see, the way everyone else approaches bots is a top-down methodology, where you start with a blank page or a whiteboard and you’re like, “What’s someone going to say to my bot?” So you draw that that in a node and then you make branches from there. If they say this, I’m going to say this next. Then if they say this, I’ll say this next.

In reality, it’s just a hopeless task. Because there’s no way you’re going to be able to map out every way the conversation is going to go. People get stuck in this top-down approach thinking that the key to success is to make better tools to make more branches. But you can only make so many. And this is exactly the pitch I gave Drift’s co-founder and CTO Elias Torres the first time I met him.

I think what got Elias’ attention was when I told him about Giant Otter’s bottom-up approach to bot building – where we didn’t even attempt to make a tree. Instead, we looked at the real conversations and added annotations that the bot can learn from over time. The platform we built helped companies build their own natural language database by archiving transcripts from sales and customer support chats. We were able to annotate a certain part of a conversation and mark it as building rapport, answering a pricing question, or overcoming an objection. It was based on the idea of episodic memory, and how humans draw from past experiences to better understand each other. So we thought, why not apply this way of thinking to chatbots? By learning bottom-up from real data, you can learn organically how real people converse and capture a lot of that nuance that you would never be able to author by hand.

MS: How did you get introduced to Drift? What made you decide to pursue the acquisition?

JO: I was introduced to Elias in early 2018. Drift had already been on my radar, because we were talking to a variety of live chat and chatbot companies, trying to offer our more powerful conversational AI engine as a partnership. Drift stood out as the only company using chatbots for sales and marketing – everyone else was focused on support. But the goal of a support bot is to resolve a customer issue with as short a conversation as possible, which was not a great application for AI technology designed to maintain coherent extended conversations! We found that the sales and marketing use case was much more relevant to us, where our goal was to keep the web page visitor engaged for as long as possible, answering their questions, learning about them, assessing whether they were a qualified lead, and then routing them appropriately to human sales agents on self-serve resources on the web. The more Elias and I talked about the potential of integrating our technologies, the more excited we both got. It was clear that there was more potential for both of us together than going for it on our own.

MS: What are you working on now? What was your role in building Drift Automation?

JO: As part of the acquisition, the Giant Otter team joined Drift and we formed the Drift AI Lab. We’ve been hard at work on building the AI for Drift Automation and we used a combination of people, machines, and algorithms to bring the product to life. We use AI both to power the bot, but also to help in the authoring process. We pair each Drift Automation customer with an AI Conversation Designer at Drift, who combs through their data and uses our tools to learn a model of their own conversations, taken from their best SDRs. Wherever possible, we use AI to do a first pass of the work to make the human’s job easier. And that way we can make sure we’re helping make the best use of human hours. Because a big part of what we’re offering with Drift Automation is that it was built to take the headache away from marketers. Marketers don’t need to spend time building decision trees anymore. Instead, our AI Conversation Designers use our AI tools to author something much more complex from organic chat transcripts.

MS: You got your start in the gaming industry. Why switch gears and work on AI for sales and marketers?

JO: Games will always be interesting to me. But I wanted to dig deeper into real-world conversations. Games are controlled environments. But when it comes to sales and marketing, there are so many nuances in language and communication, and for me, I viewed this as a huge opportunity that was too big to pass up.

MS: It’s no doubt AI has undergone a pretty big transformation, even in the last five years. What sticks out to you when you look back on your experience?

JO: When I started working it was 1996, and the World Wide Web was a pretty new thing. There was dramatically less computing power. It was hard to get data anywhere, and there was no cloud. The development of all these things has totally changed what’s possible.

If you wanted to do anything with servers, where you would collect data from people, you would have to physically manage a rack of computers. Even for my Ph.D. work, the cloud was a new thing. So I collected old PCs from around the lab that people weren’t using. I must have had 10 different PCs heating up this little office as servers to connect with game players and record data to hard drives. Everything’s changed. Now you can just go into your AWS dashboard and be like, “I want 10 more servers, turn them on now.”

MS: Okay, here’s the million-dollar question. There’s so much hype around AI. Should we believe it?

JO: It’s true that AI is a remarkably powerful technology that is impacting nearly every industry. But it’s not magic. And it needs human guidance to learn the right things. Anyone who says they have an AI system that can learn on its own to do the job of a salesperson, support rep, or marketer is selling snake oil. At Giant Otter, we spent five years iterating on a human-machine collaborative process, where AI learns from real chat transcripts. So that means there is a human in the loop curating the data to point out the best examples and explaining what different chunks of conversations mean. The AI can learn the structure of conversations from this guidance – kind of like learning a complicated graph of every way a conversation could play out, but more complicated than any human could ever draw. Our goal was always to have machines do what machines are good at, and humans do what humans are good at. That way, we could get the best of both worlds.

MS: One more thing. Drift formally acquired Giant Otter back in 2018. Why wait to make the big announcement?

JO: Getting acquired was exciting, but we all agreed to keep it quiet because AI really is so over-hyped. We didn’t want to deliver another promise. Because it’s not really an announcement if you go out and boast that you have this brand new system that nobody can touch. Yes, we knew we had something special. But we agreed that the best thing to do was to prove it out with Drift customers so that when we released it, it was real.

There’s more where that came from. Want to keep learning about Drift Automation? You can learn about Qualification Bot here and how one of Drift’s customers, Keap, has used it to grow pipeline by 50% (in only 50 days) here. 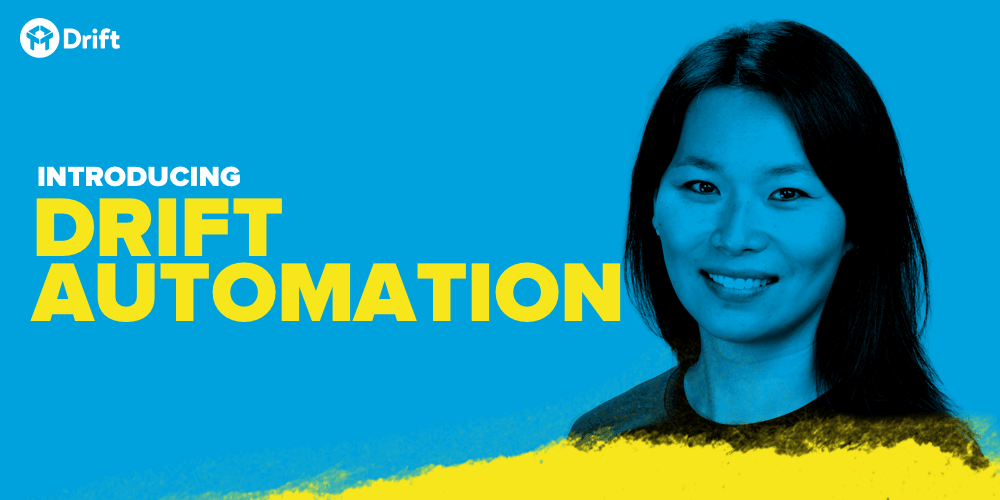