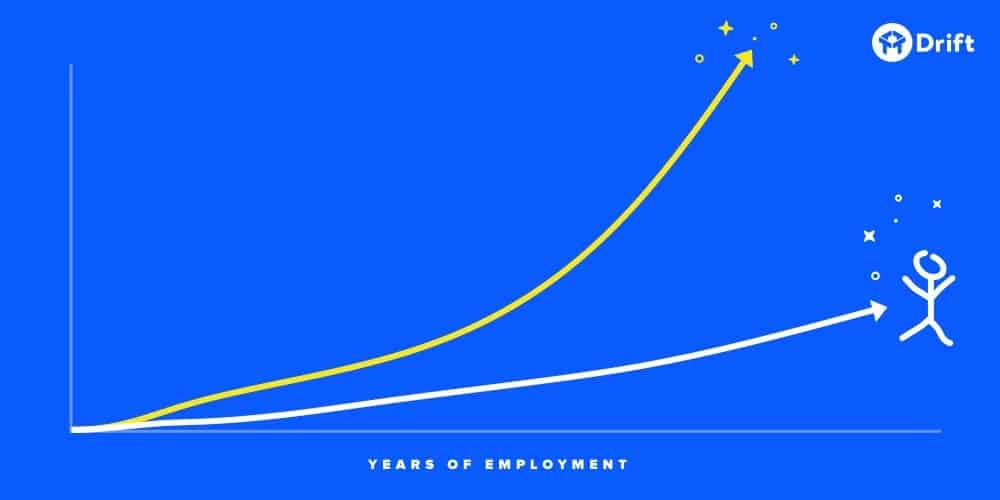 Back in the early days, before we launched Seeking Wisdom, I used to have these meetings with Dave Gerhardt (DG). Back then, DG was the only marketer and he had just joined the team, so I was explaining to him how he could set himself up to grow as the company was growing. And I said that what happens is, usually, if a company is growing quickly, if they’re experiencing hypergrowth, that company will end up growing faster than the individual.

Over time, if a company is achieving hypergrowth and a person is not able to keep up and stay ahead of that growth, which is a daunting task, then a gap will form between the two growth paths and the company will have to bring in more people who have the necessary experience to fill the gap. They might have more experience, or they might have different experience — it depends on the problem. But this is usually what happens, and it’s completely normal. It shouldn’t be seen as a negative thing, it’s just what happens with hypergrowth companies. 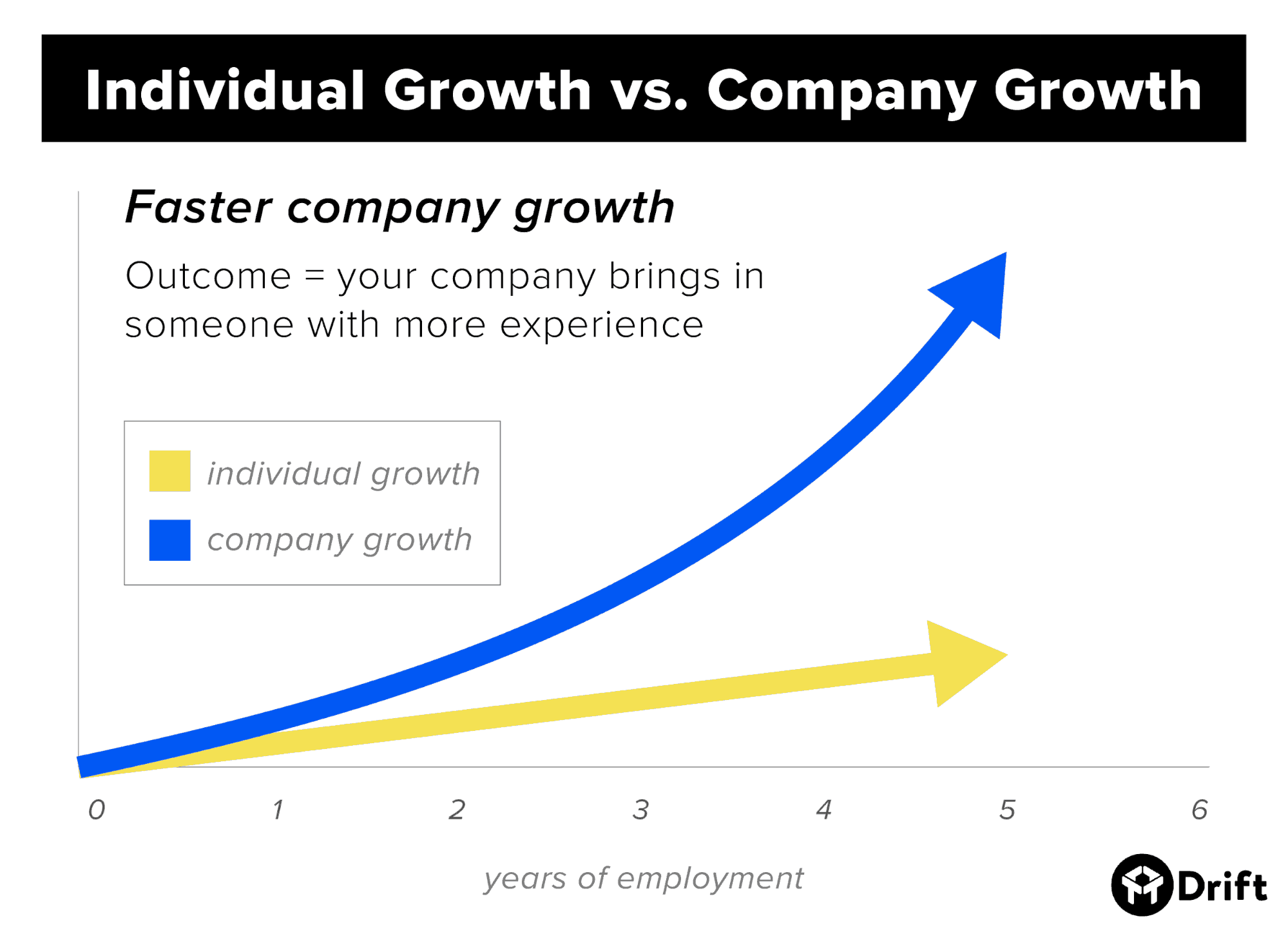 Now, at a slow-growing company, which is also normal, the company might grow more slowly than an individual. So in this case, where you have a growth-oriented individual who is growing faster than the company, that person will typically leave that company and go somewhere else to find a growth opportunity.

Ideally, a person’s growth rate would always stay slightly ahead of the company’s growth rate. That way they could continue to jump into bigger and bigger opportunities because they’d be able to anticipate and adapt to the needs of the company. (However, this almost never happens.) 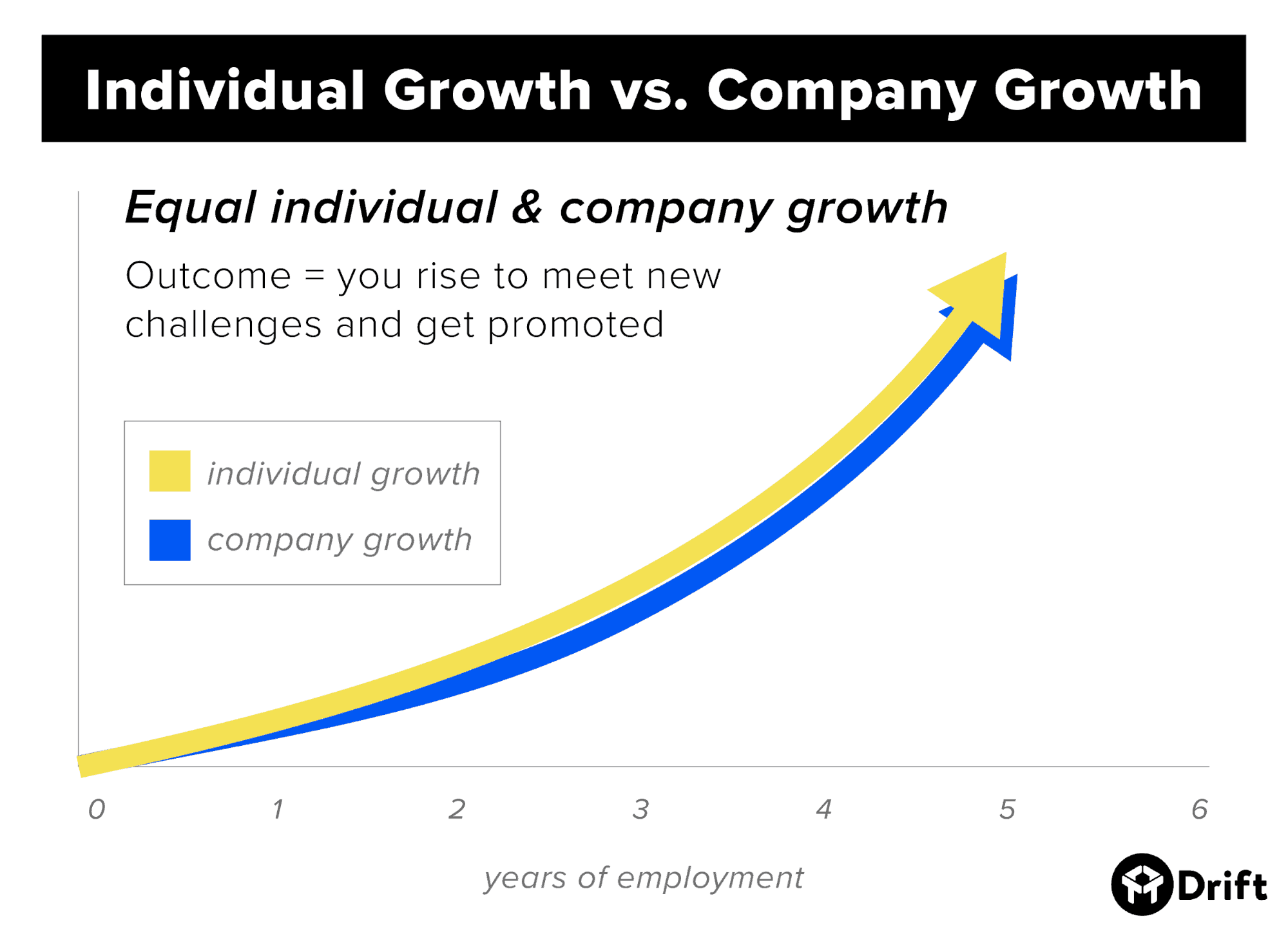 As I was telling some new Drifters recently during onboarding recently, this is why hear so many stories about founder/CEOs like Jeff Bezos, Mark Zuckerberg, Bill Gates, Steve Jobs, or Sara Blakely. Why they are worth talking is not just because they founded great companies, it’s because what they’ve done is so unusual. Take Sara Blakely, who started Spanx, which is now a multi-billion-dollar company, out of the back of her car with something like $5 thousand in savings. No investors. And she built a multi-billion-dollar brand and is still running that multi-billion-dollar brand all these years later… that hardly ever happens.

In most cases, even if a person is able to grow fast enough to keep pace with a hypergrowth company, after a year, two years, five years, or ten years, at some point either the company’s growth or the individual’s growth starts to flatten out. And that’s totally normal. Growth flattens out and once again you have a mismatch — either an individual grows faster than the company, or the company grows faster than an individual, and either way a change needs to be made.

This is an important concept that I wish someone had explained to me a long time ago. It would have saved me a lot of pain in my career. But nobody told me this. Because usually when you’re going through this, and you don’t have enough context and history, you as an employee think, oh, the company is just bringing in new people because they’re older or more senior and existing employees aren’t getting a fair chance. And that may be true at some companies. But what usually happens is if you take ownership of this, extreme ownership, as our friend Jocko Willink (who’s speaking at HYPERGROWTH) would say, and you start analyzing what’s happening in your career and the careers of people around you, you can boil it all down to one of three scenarios:

A lot of people will see, when there’s a mismatch, as things being over. So let’s say the company is growing faster than the individual, and the individual doesn’t get that next promotion and the company brings in someone from the outside. Now, a lot of people might look at that in a fatalist way and think, that’s it, there’s no way that individual is ever going to get promoted at that company, and if it were me, I’d leave.

Instead, what you need to do is think in abundance and say, wow, this company is growing faster than I am. Is there an opportunity for me to set myself up for my next promotion? So even if you miss that first step, think of what you can do to achieve a step function in personal growth so you can stay ahead of the company when it takes its next step function. And you can take advantage of the person who just came in and learn from them so you’re ready to take that next step.

The Importance of Mentors: A Lesson From Arnold Schwarzenegger

This is a person who has manifested his own destiny, not once, not twice, not three times, not four times, not five times, but over and over and over again. This is a person who, when he was in Austria as a little boy, decided he wanted to become Mr. Olympia. He trained every day and he became not a one-time Mr. Olympia but the greatest Mr. Olympia ever. Then he moved to the United States. He couldn’t speak English, but figured it out. And he decided while he was training, before he became Mr. Olympia, before anyone knew him, that he wanted to be real estate owner. So he sought out mentors, the best in the business, to teach him how to buy and sell real estate, and he is now one of the largest real estate owners in Santa Monica. And a lot of his wealth continues to come from that.

Then Arnold Schwarzenegger decided that he was going to be an actor. So he went and auditioned for roles and told people about it and they laughed in his face. They said that no one could understand his accent and that he’d never be an actor. They also said he had to change his name because no one would be able to spell Schwarzenegger. So what did he do? Once again, he found the best mentors out there. He went and dedicated himself and spent years learning the craft. He didn’t do what most people do these days, which is going, “Oh, that sounds cool, will you send me a link?” Wait, what? You won’t even go get the link? If you can’t even go get the link you’re in trouble. This guy figured it out pre-internet, found mentors, and became the blockbuster movie star we all know today.

Back before all of this, before he was Mr. Olympia, the dig on Arnold was that he had no calves. He had very small calves. So what did he do? He found a mentor who had tremendous calves down in South Africa. He finds this guy, flies to South Africa, and has this guy teach him how to build up his calves. Then he builds up his calves and wins Mr. Olympia.

Then he decides he wants to get into politics, and we all know what happened there. Everything this guy has thought about, he’s manifested. And he didn’t stumble upon it, he went out, found mentors, and put in the reps and sets in order to make it happen.