The Hypergrowth Curve: How to Navigate the 3 Stages of Massive Growth 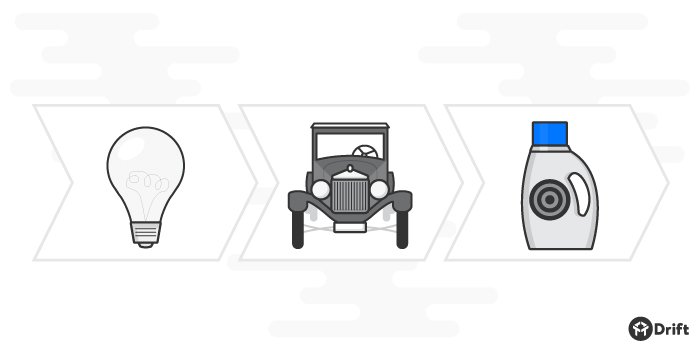 Why do some companies, products, services, and ideas achieve Hypergrowth, while others only capture a small portion of a market?

That’s the question I was trying to answer when I came up with the Hypergrowth Curve.

The curve consists of three stages of growth that every breakthrough company, product, service, or idea transitions through. And in each stage, the strategy and focus totally shifts. 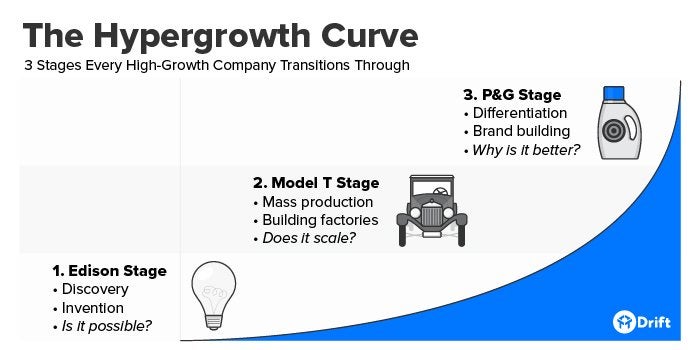 In the first stage on the Hypergrowth Curve, you’re building a product and finding your tribe. You’re seeing if the idea is even possible.

In the second stage, you’ve found product/market fit and are now focused on rolling out your invention to the masses.

Finally, in the third stage, you’re focused on building a global brand and dominating an entire category (or micro-niche).

For a more in-depth look at the three stages of the Hypergrowth Curve, check out the video below (or keep reading).

The first stage of the Hypergrowth Curve I call the “Edison Stage” after Thomas Edison, and this stage of business is defined by invention. It’s the stage Edison went through when he was creating the light bulb. You’re investing all your time trying to figure out:

Can we actually build this thing?

Is it possible to build this thing?

And this is really the phase where patents come into play, where invention comes into play, and this is the first phase of a market.

If you think about where we’ve been with content marketing and blogging, as an example, the first stage was when there were no blogging platforms. There was no software to do this. To create a blog post back in the day, you would create a static HTML page and then you would upload that page using FTP to a web server that you had somewhere. And what was considered a blog post. That was the first stage.

Or in SaaS, that would be when Salesforce came into market and started to build software as a service. They were the first to take on-premise software and bring it into the cloud. That was that first stage.

And in that first stage, it’s all about finding early adopters, and building your tribe.

In the next stage, the tribe goes mass market.

This is the stage we’ve been in with content marketing and even SaaS for the past decade.

The Model T stage, just like the name implies, is when Henry Ford took something that had been previously invented, which was the automobile, and figured out how to bring it to the masses.

This stage is about building factories. And it’s about operational moats that you build in your business.

And it’s relatively easy to standout in your niche in this stage. There’s low competition for attention — you might have 10 competitors or so, and you can easily name them.

However, in order to advance to the next stage on the Hypergrowth Curve, where you might be facing up to 100 competitors, you’ll need to change your approach.

In the third stage we cross the chasm into a global audience.

Using email as an example, in the third stage, winners look like MailChimp:

They succeed by differentiating on brand, and the winner takes the biggest share of the market.

In this stage, you’re trying to create a moat around brand, and brand preference.

You’re helping a global audience answer the question, “Why do I want to buy this brand versus another?”

Those are the two ways to win in this world.

Disproportionate results go to the winners.

The important thing here is whatever you’re creating, whatever you’re doing, you need to understand which stage of business you’re in: the Edison Stage, the Model T Stage, or the P&G Stage.

That’s going to dictate the strategy and tactics that you use.

Want to learn more about the Hypergrowth Curve? Listen to the latest episode of my Seeking Wisdom podcast below: