The relationships you build with your customers are crucial to the success of your business. But in today’s on-demand, subscription-service world, where customers have all the power, relationships are now easier than ever to get out of.

If customers aren’t finding your product helpful, if they aren’t seeing the value in it, they’ll simply stop paying for it. And they’ll likely switch to a competing product in order to find the value they’re looking for.

[Would you rather listen to this post? Check out the recording below!]

And that’s why more and more companies — including Drift — have been making a conscious decision to invest in strengthening customer relationships. We’ve been doing that by investing in customer success.

The Top 6 Customer Success Metrics To Measure & Act On

Here’s the three categories of customer success metrics we recommend measuring in SaaS (along with the KPIs to measure within each):

We’ll dig into each of these metrics and KPIs in detail throughout this guide. But first…

Why You Should Measure Customer Success Metrics & KPIs

As SaaS entrepreneur and investor Jason Lemkin said in 2015: “Customer success is where 90% of the revenue is.”

And what he means is that it’s easier to drive revenue through upselling or cross-selling existing customers vs. going out and finding new customers.

To clarify, the objective here isn’t to squeeze as much money out of your customers as possible. Instead, you should be aligning your pricing with the value customers are receiving. (This post from our CEO David Cancel explains our views on pricing in more detail.)

The other major benefit of investing in customer success: it drives new business through virality and word-of-mouth.

Customers who see real results and who are continually amazed by the experiences they have with your product (and employees) will inevitably tell other people in their industry about you. It’s the best kind of marketing you could ever ask for. 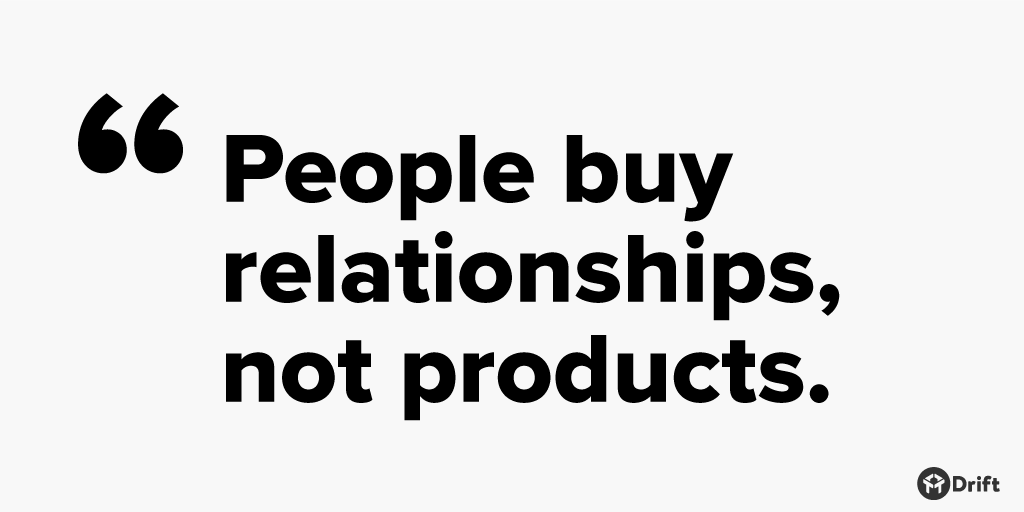 While the benefits of having a customer success team seem pretty obvious, like any team it needs to be able to justify its existence with data. So you need to have customer success metrics in place that help you evaluate your progress.

After scouring the internet for every customer success metric imaginable, and after talking to a bunch of people (both internally and externally) who work in customer success, I came to a realization:

Everybody does things a little bit differently. Which makes sense, considering everybody has a different product — so there are different product-specific events and activities that need to be measured.

That being said, there are plenty of customer success metrics that all SaaS companies can benefit from looking at. Those are the metrics I’m featuring here.

The percentage of customers who quit your product in a given period of time: That’s your churn rate.

Or at least, that’s your customer churn rate.

As VC Anoushka Vaswani explained on David Skok’s For Entrepreneurs blog, there are actually three types of churn you can measure.

In addition to customer churn, which is the type I just described, there’s gross dollar churn and there’s net dollar churn.

Gross dollar churn is the percentage of total revenue lost as a result of customer churn and downselling or downgrading (i.e. when customers move from a more expensive plan to a less expensive plan).

When measured on a monthly basis, gross dollar churn is also known as “monthly recurring revenue churn,” or “MRR churn”.

When measured on a monthly basis, net dollar churn is is also known as “net MRR churn”. 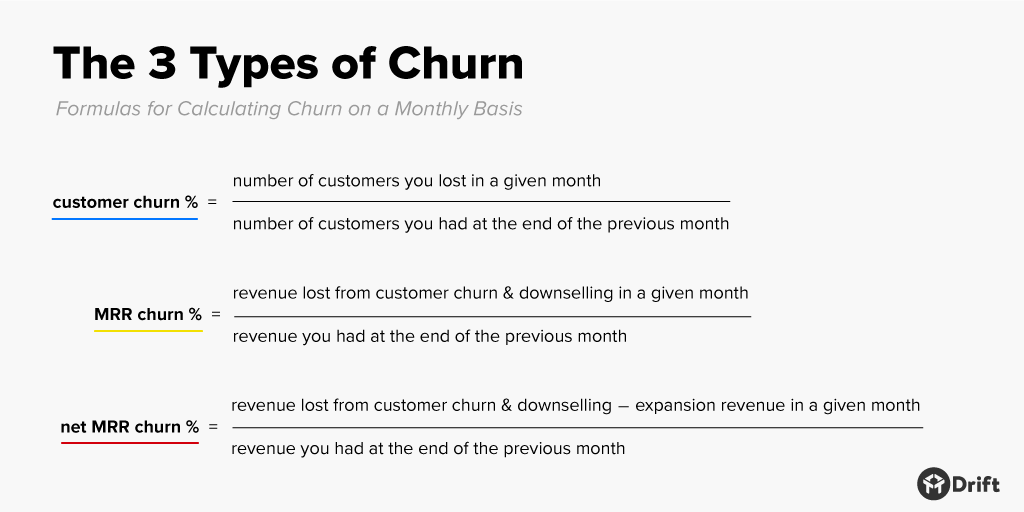 To help you get a better sense of what measuring these metrics might look like in practice, I took the sample data Anoushka provided in her churn post and graphed the three different types of churn rates. Just keep in mind that the sample data only looked at 30 (made-up) customers, so some of the percentages are a bit on the extreme side. 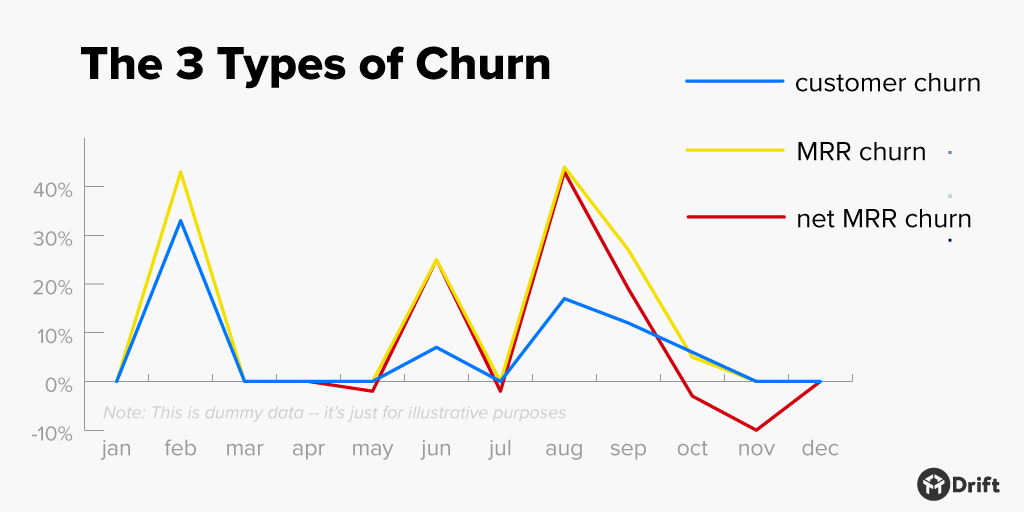 What the graph above helps to illustrate is that measuring customer churn alone won’t give you the full picture of how churn is affecting your business.

For example, in the month of June, customer churn was 7%, but MRR churn was at a whopping 25%. This tells us that some high-paying customers were among those who churned that month.

And actually, if you look at the sample data, you can see that it was just one high-paying customer who churned. The customer had been paying $2,000 per month, which was equal to 25% of the MRR the company had ended with the month before.

Of course, in addition to looking at churn rates (i.e. the percentage values), you can evaluate churn by looking at the actual dollar amounts. 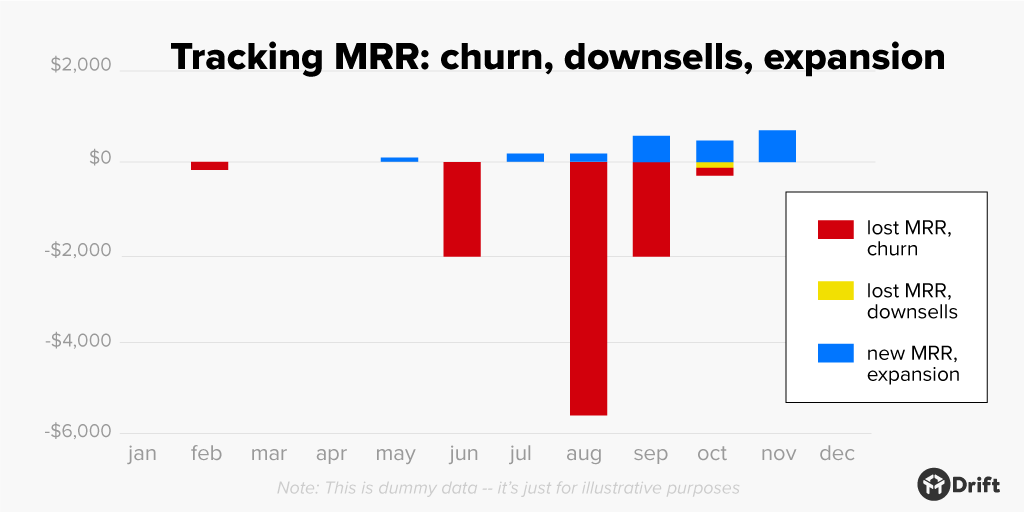 As you can see, MRR lost from downsells hasn’t been much of an issue at this hypothetical company, but the MRR lost from churn is pretty concerning. (Note: There’s a benchmarks section at the bottom of this post that explains what a healthy churn rate looks like.)

Meanwhile, the blue bars on the chart give us a glimpse into the company’s expansion revenue.

While related to churn, expansion revenue really deserves its own spot on this list. So that’s the metric we’ll explore next.

What percentage of your new revenue is coming from your existing customers? That’s expansion revenue.

When you look at expansion revenue on a monthly basis, it’s known as expansion MRR.

Calculating expansion MRR is pretty simple: just take all of your new revenue from upsells & cross-sells for a given month and divide it by the revenue you ended with the month before.

So, for example, if your new MRR from upsells and cross-sells totaled $100 in February, and your ending MRR for January was $1,000, your expansion revenue for February would be 10%.

To help you get a better sense of how expansion revenue fits into the bigger picture of a company’s revenue growth, I took the data from my previous examples and plotted expansion MRR on top of MRR that came from new customers. 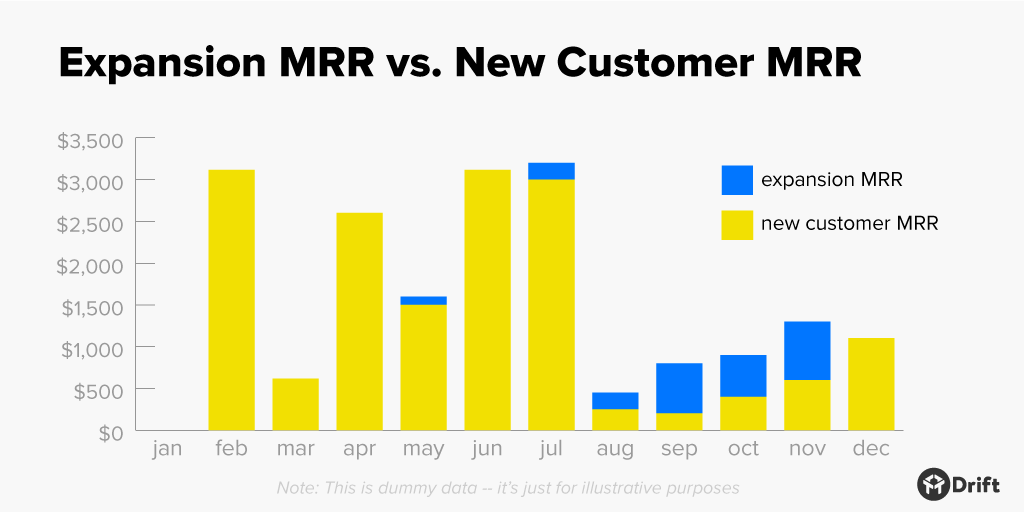 The yellow in the graph, new customer MRR, belongs to your sales team.

As a customer success manager, knowing that a customer’s feelings toward your product are changing for the worse gives you the opportunity to take action before that customer decides to do something drastic … like downgrade or churn.

By regularly monitoring customer satisfaction, you can identify those customers who are most at risk of churning and work toward improving their experiences.

NPS has become one of the most ubiquitous metrics when it comes to measuring customer satisfaction with SaaS products. We use it here at Drift, and running NPS surveys is a feature of our in-app messaging product (check out our NPS customer feedback post). 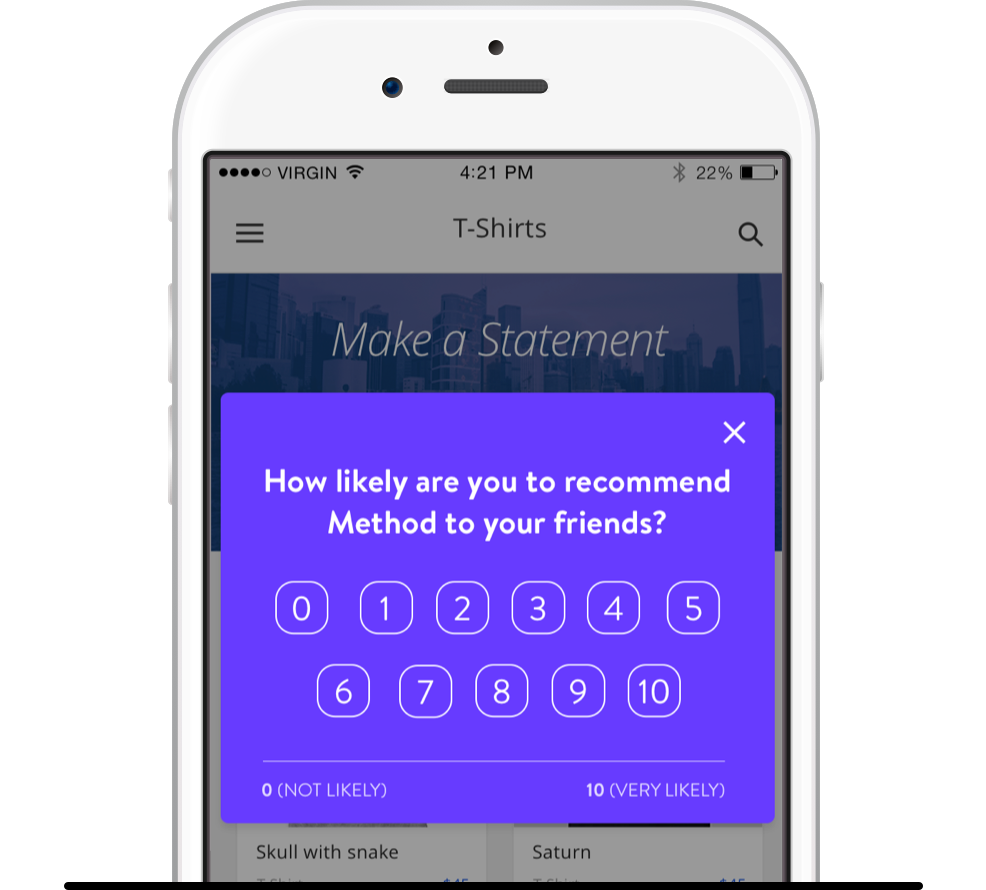 One of the reasons for its popularity is its simplicity: With an NPS survey, a customer is asked a single question, “How likely are you to recommend [Product] to a friend or colleague?” The customer then picks their response from a 0-10 scale.

Based on the responses they give, customers are then grouped  into three categories:

Compared to more traditional measures of customer satisfaction, like the CSAT (which we’ll cover next), NPS is more closely tied to growth. On average, companies with the highest NPS in their industry tend to outgrow their competitors by at least 2x.

NPS is also a strong predictor of customer loyalty. Customers who fall into the “promoter” category tend to have an average lifetime value (LTV) that is 3x to 8x higher than those in the “detractor” category.

Translation: promoters stick around with your company longer, they spend more, they’re less expensive to serve, and they tell other people about your product.

The Customer Satisfaction Score, or CSAT, can be a useful metric for looking at short-term happiness. But as I mentioned earlier, it isn’t a great measure of growth or customer loyalty.

A CSAT survey asks a question along the lines of, “How would you rate your over­all sat­is­fac­tion with [Product]?”

Customers then give a response on a 1-5 scale. (Or at least that’s a popular format.)

Your resulting CSAT can be represented as a percentage between 0-100 based on how many customers were “satisfied” or “very satisfied.” 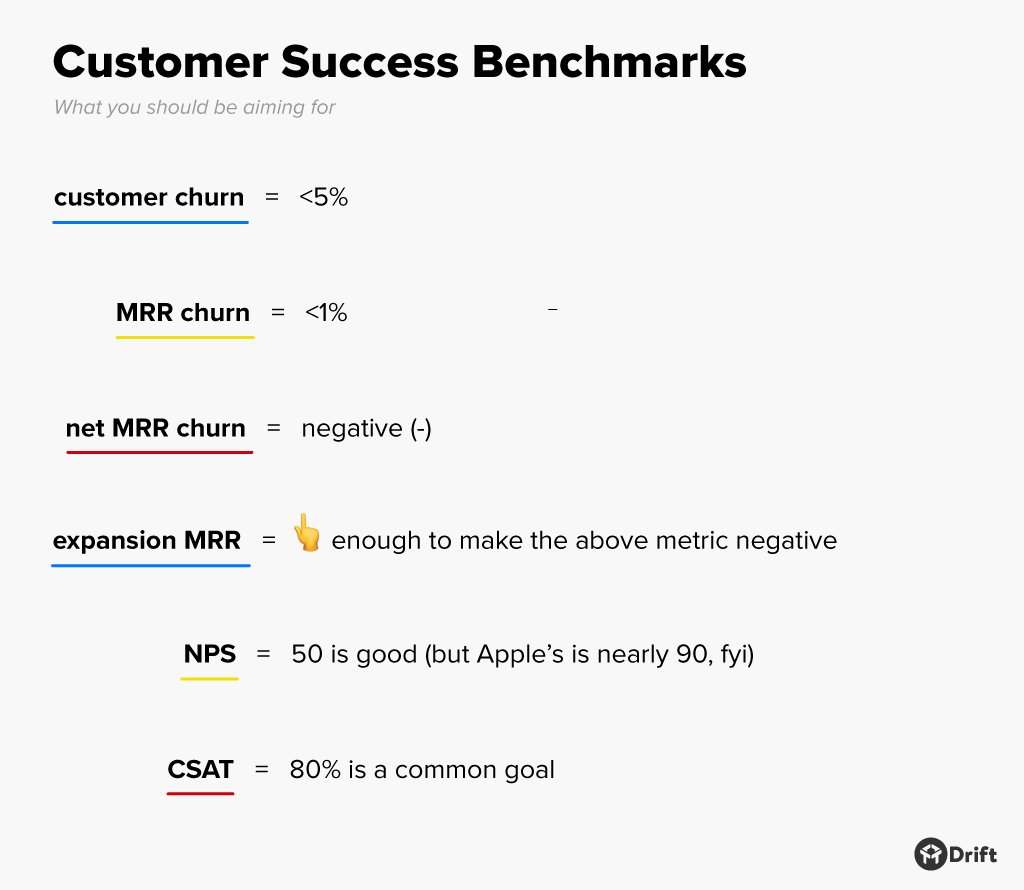 Since both of these terms tend to get used a lot, we thought it was worth digging into the differences.

Unlike customer support, whose primary goal is to solve customer issues as they arise, customer success takes a longer-term view of the customer relationship. From day one, the mission of customer success is to help customers derive as much value from the product as possible. 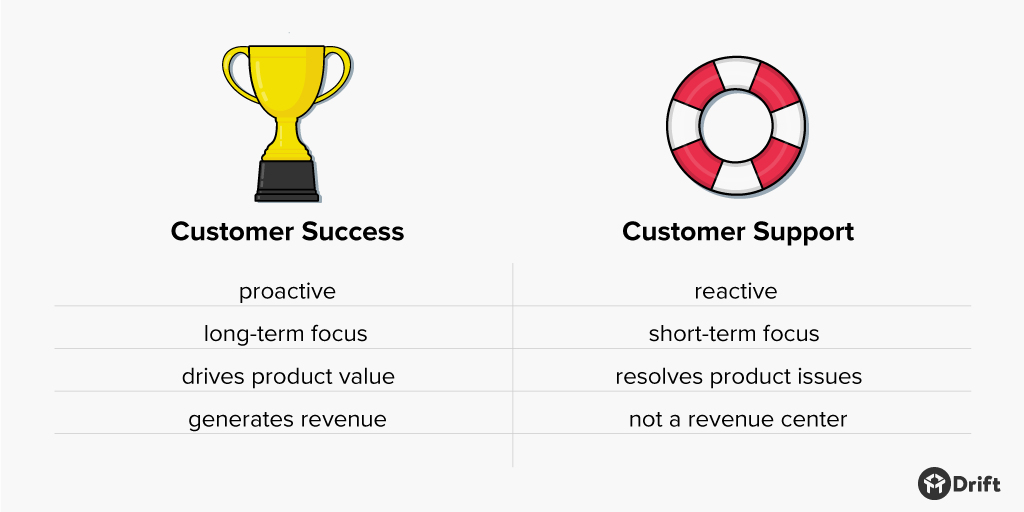 (Note: this graphic was inspired by a graphic I saw on the OpenView blog.) 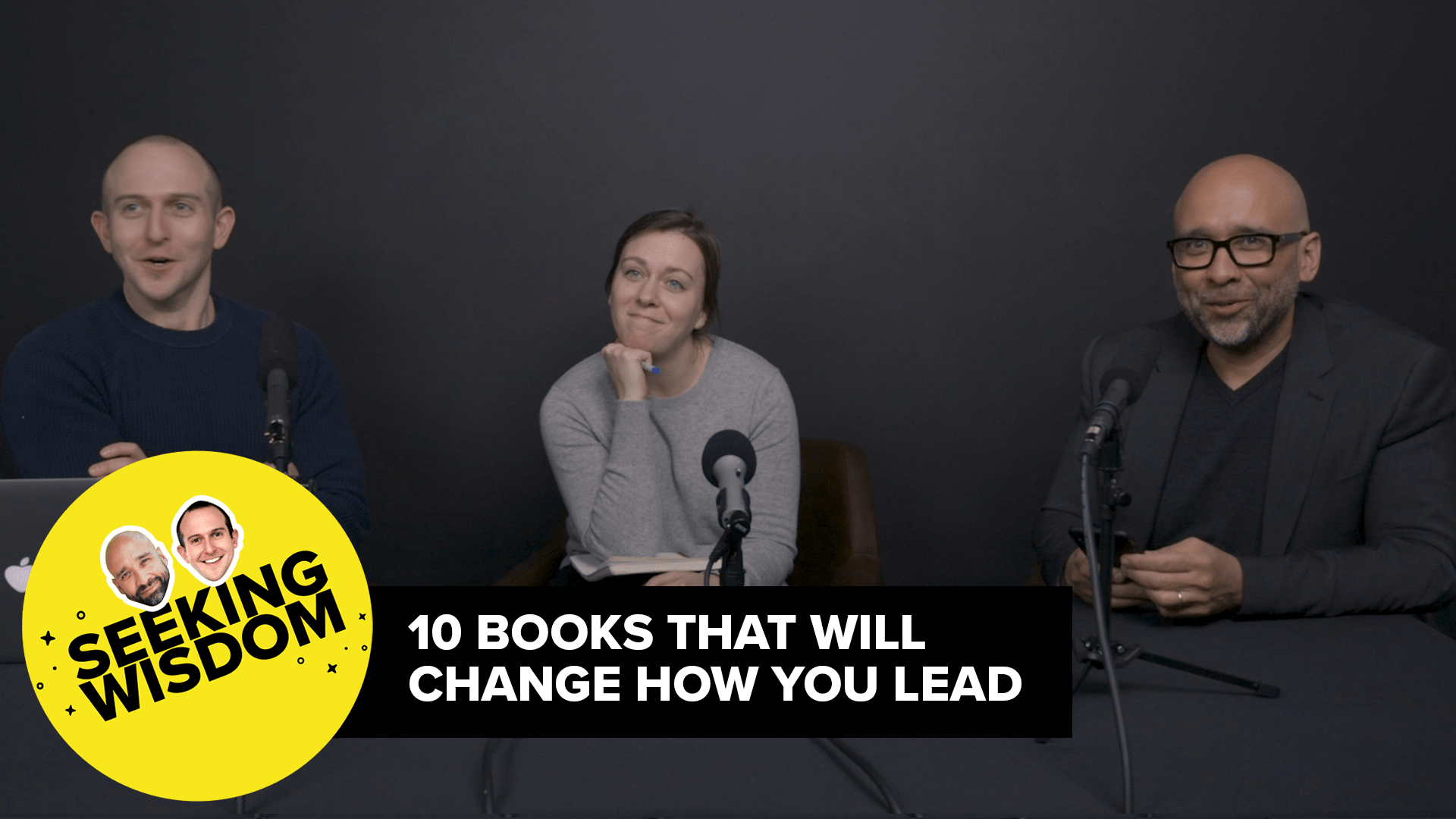 10 Books That Will Change How You Lead
See More 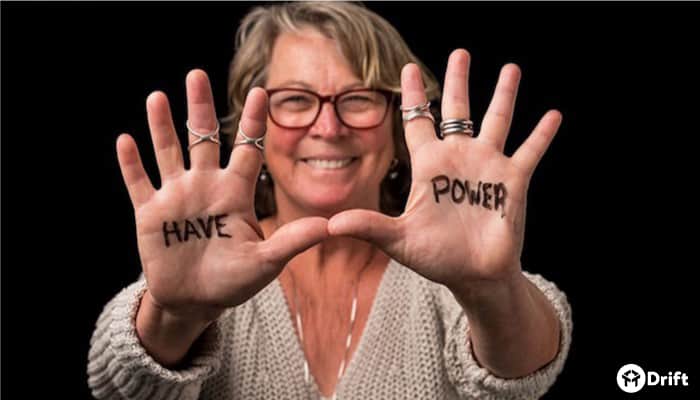