NPS: The Easiest Way To Get Customer Feedback

Since its introduction in 2003 by Bain & Company, Net Promoter Score (NPS) has become the market standard for quantifying customer satisfaction in SaaS.

One of the main reasons for the wide-adoption of NPS is its simplicity. NPS asks one simple question that you’ve probably answered on multiple occassions for your favorite products and services:

How likely are you to recommend [Product Name] to a friend? 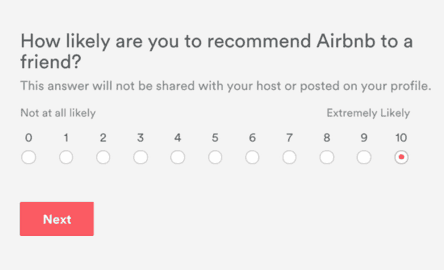 Because the survey is so simple, companies can get customer feedback in real-time. Airbnb uses NPS to predict how likely a customer is to re-book, while Atlassian uses NPS to help their product team prioritize new feature requests.

Put your consumer hat on for a second: if you were browsing Airbnb for a place to stay for a weekend in South Beach, would you want to fill out a 10 question survey after you secured your room? No. But there’s a good chance you would take a second to fill out a one question survey.

NPS is also simple for you (the business that’s asking). Instead of trying to wrangle a variety of questions and responses, there’s only one question that you need to focus on and react to.

Having one, standard question also means that it’s easier for you to compare your company against others in your industry so you can get a benchmark.

How NPS Is Measured

NPS is measured on a scale of 0-10 and broken up into three main buckets:

As a rule of thumb, 50 is typically an impressive score, but as you can imagine, the results can vary tremendously by your industry (see: cable companies).

The ROI Of NPS

By measuring NPS, you can always have a finger on the pulse of customer satisfaction. And with more businesses today making the shift to subscription-based revenue models, keeping customers happy on an on-going basis has become more important than ever.

But here’s where the real ROI comes in: higher NPS scores can have a material impact on the growth of your business:

Measuring NPS helps to ensure that the entire company is accountable for customer success. It gives everyone a number and a scorecard to benchmark against.

NPS is not only a good indicator of a company’s future growth, but it can help identify any unhappy customers and problem areas that need to be addressed.

Ways You Can Measure NPS

For SaaS businesses, there are two main ways to capture NPS data: in-app or email.

Email
Email is as simple as it sounds. A particular segment of customers would get an email asking them the NPS question: 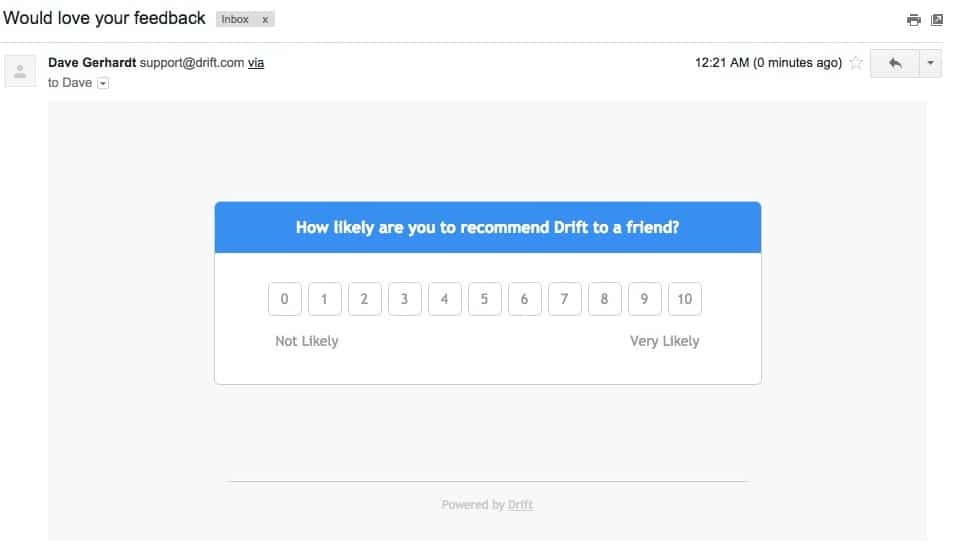 In-App
This is one of the great benefits of SaaS: the ability to get a survey live inside of your product and get feedback in real-time:

Since in-app surveys can be much more relevant (right place, right time in your app), they will typically see a higher response rate than email, where the average open rate is 21.57% and the average click rate is 2.46%.

But regardless of how you are measuring NPS, that’s just the first step. What really matters when it comes to customer feedback is what you do once you get it, whether it’s asking promoters for a referral right in that moment of glory, or getting in touch with detractors to figure out what can be improved.