The Next Wave in Sales & Marketing 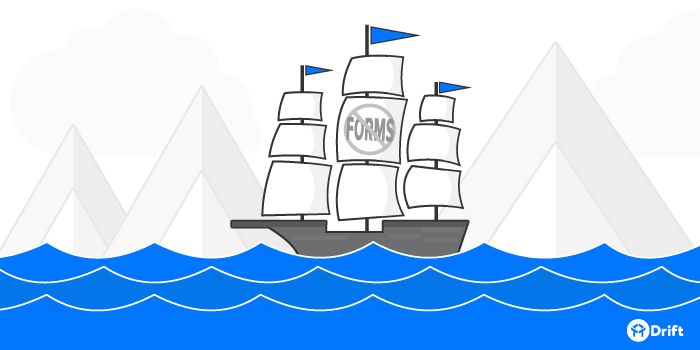 Note: This post is based on a talk I gave at Revenue Summit 2017. Scroll down to see my presentation deck.

Look back 5-10 years ago, and sales and marketing teams were all focused on this same thing:

Some people are still asking these questions today, but for the most part these are questions that we’ve already found the answers to.

People have figured out how to attract attention and get awareness and get people to their websites, thanks in part to all of the technology that’s been developed: marketing automation software, social media management software, blogging software with built-in SEO tools, and the list goes on.

That was the first wave in sales and marketing.

Now it’s time to move on to the next wave.

The first wave has already gone roaring passed us, but it’s left a lingering question in its wake:

Now that we’ve figured out how to get people to our websites, what do we do with them once they’re there?

The traditional approach: Put up lead capture forms and then follow up with people when you feel like it.

That is today’s best-in-class approach to sales and marketing. Drive people to your site, give them a form, they become leads in your database, then you nurture and nurture and nurture until maybe they do some action that turns them into a marketing-qualified lead (MQL) or a sales-qualified lead (SQL), and then maybe they get to talk to an actual person.

To understand just how terrible of an experience this is, imagine running the same sales and marketing playbook with a brick-and-mortar store:

You’re out on the sidewalk holding up a big sign, you’ve got balloons, you’re jumping up and down, trying to get people to notice your store. But then when people actually walk into your store, it’s empty. There’s nobody there. The only thing there for your potential customers is a book where they can leave their name and email address.

This same argument has taken place at every B2B company since the beginning of time.

But just think about that approach for a minute: We’re collectively spending a fortune convincing all of these people to come to our websites. But once they actually do that, and they’re ready to have a conversation, suddenly it becomes too expensive or too much of an inconvenience to talk to them right away.

So what do we do? We stop them in their tracks. We put up forms. And, as a result, our conversion rates end up being pretty miserable.

So in the end it just becomes a numbers game. We figure out how much traffic we need or how much sales velocity we need in order to make up for those conversion rates.

But even if you’ve gotten really good at optimizing your funnel, there’s one thing you’re probably not doing:

Responding to leads in real-time.

According to benchmark data from InsideSales.com and Harvard Business Review, the sweet spot for responding to a new lead is right within the first five minutes.

This makes a lot of sense. Because if you go to a company’s website looking for an answer, are you going to stick around for 45 minutes waiting for a follow-up? Of course not. You’d want to get an answer right away, or you’d move onto something else.

At Drift, we wanted to see if companies were actually living up to that five minute magic window, so we did a “secret shopper” lead management study that looked at 433 B2B companies. We went to their websites during business hours and we filled out “contact sales” forms or whatever they had available. The goal was to raise our hands and say, “Hey, we’re interested buying.”

The tl;dr version: Only 32 of the 433 companies responded within the first five minutes. That’s 7% of companies.

But the more alarming stat: 240 companies, 55%, took five days or longer to respond or they didn’t respond at all.

This experience simply doesn’t match the way people like to communicate these days. But instead of adapting, we’ve been treading water. We’ve doubled down on the same old tactics: forms, emails, phone calls.

When we built Drift, we got to start with a blank slate. So we decided to define a new playbook, which we ended up calling “Fastlane.”

With the old approach, all of your leads have to hurry up and wait. They speed towards your website but once they get there, BAM, toll booth. They have to wait in line with all your other leads.

With Fastlane, it’s like your leads have E-Zpass or FasTrak — they can drive straight on through and (if needed) can get instantly connected with a sales rep.

But in order to make Fastlane a reality, we had to make a major change.

Getting Rid of Lead Forms

About a year ago now, I called our director of marketing Dave Gerhardt and told him:

“I think we should get rid of all of our lead capture forms.”

Considering that forms have been central to sales and marketing for years, this wasn’t an easy ask. After all, without forms, how could we generate leads?

The solution: Use conversations to capture leads.

Think about it, billions of people are now using messaging apps to communicate. From chatting with friends on Facebook Messenger, to chatting with coworkers on Slack, messaging has become the channel for mass communication.

So why are so many companies still doing sales and marketing like messaging doesn’t exist?

Instead of forcing people to fill out forms and wait for follow-up emails and phone calls, you can use live chat to talk to those people in real-time, while they’re live on your website.

This is the next wave in sales and marketing.

Using the old methodology, and the old toolset, your sales and marketing team will never be able to respond to every single lead in less than five minutes. But with an intelligent messaging platform, they can.

If you’re not ready to take the plunge and completely replace lead capture forms with live chat, there’s another option to consider

You can leave your website the same, but just add live chat to certain pages, or have it appear only for certain visitors. Basically, you can treat live chat as a “second net” — a second channel you can use to market and sell to people on your website.

That’s exactly how Segment’s VP of Growth, Guillaume Cabane, uses Drift. He created a live chat campaign that appears only to visitors who work at specific companies — ones that he’s identified as being a good fit for their product. But apart from that campaign, Guillaume has left the Segment website exactly the same. 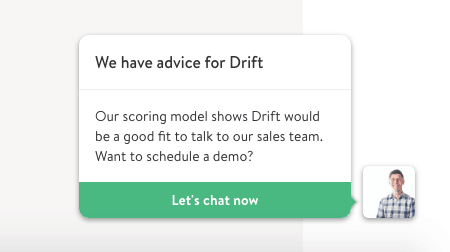 Within three weeks of adding this “second net,” it became Segment’s third-highest source of qualified opportunities.

Today, Drift is the #1 source of Segment’s qualified opportunities and the strongest contributor to Segment’s growth year-to-date.

The next wave of sales and marketing is here. So now you have a choice to make: