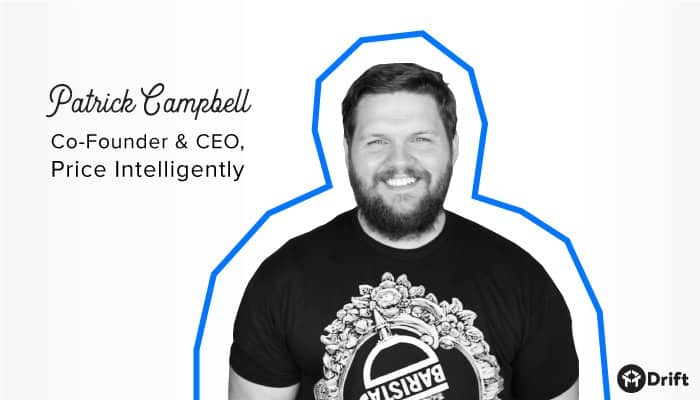 If you work in SaaS, chances are you’ve heard of Price Intelligently, a company that’s been focused on taking the guesswork out of pricing (and injecting some much-needed science into it).

The Price Intelligently team are also the creators of ProfitWell, a free product that integrates with tools like Stripe, Braintree, and Zuora to bring all of your subscription and financial metrics together in one place.

With 8,000 companies now using ProfitWell, it’s clear that whoever came up with the service knows a thing or two about finding and retaining customers — which is why we were pumped to have Patrick Campbell, co-founder and CEO, on the latest episode of our Seeking Wisdom podcast.

Turns out that in addition to being a pricing and customer development guru, Patrick is a master public speaker (and former debate team national champion).

As you might have guessed, all of those things combined made for one heck of a discussion. You can catch the entire thing right here:

In a hurry? I’ve pulled out five key lessons from Patrick that you can read below.

According to Patrick, one of the main problems with getting through to potential customers today is density. There’s just too much stuff out there.

That’s not the case anymore. And the same goes for marketing channels.

Channels have leveled off. So it used to be, back in the early email marketing days, we were getting a brand new big channel every quarter. Every single quarter we were getting a Google, an Adwords, we were all coming online. Now, for the past five years, the average number of channels that are being utilized in the business is about 13. And it’s stayed consistent over the past five years.

But the lack of new channels isn’t the only thing making things harder for marketers:

So that’s happening, and then the other thing that’s happening (because of all the competition) is that willingness to pay is declining. And so we’ve seen this in the data. We’ve got a million data points on this, where all of a sudden cost is going up, while willingness to pay for features — because they’re relatively easy to build, we’re all building quicker — that’s going down. And then to top of it all off, consumers aren’t happy.

That leads us to our next big takeaway from Patrick…

Engineering productivity is leveling off as well. So all of a sudden, you’re not able to build as much, we’re not doing our customer development like all of the luminaries tell us to do, and consumers are noticing. We’ve noticed the NPS scores. The average NPS score, I believe it was 10 years ago, was about 34 overall. The average NPS score today has dropped to about 10 in SaaS and subscriptions.

Yikes. So what does that mean for businesses? And how do we fix it?

I’ll kick it back to Patrick:

So consumers aren’t happy, they’re harder to acquire, and all of sudden we’re all running the old playbook from 5-10 years ago. The new world that’s coming in will be focused on brand, no forms or gated content, all that fun stuff, in order to bring folks in.

3) “Those folks who are focused on customer development, they’re growing at 30% higher year-over-year growth rates than those who aren’t.”

Ultimately, the folks who abandon the old playbook and who focus on their customers are the ones who are going to succeed.

I think what’s going really well is that folks, similar to what’s happened in 2003, and 2011, out of these two crashes essentially, I think what people are starting to understand is they’re like, OK, the old playbook isn’t working….Those folks who are focused on customer development, they’re growing at 30% higher year-over-year growth rates than those who aren’t. So all of a sudden you’re getting bigger and bigger differences between the companies who are doing well and not so well, and the companies that are realizing that acquisition is basically table stakes at this point are doing well.

So, how do you know if you’re going after the right customers? Patrick’s advice: Look at open rates.

During our interview with Patrick, we switched gears to pick his brain about public speaking and storytelling. And one thing he stressed was the importance of structure.

Everything is external structure, like the classic five paragraph essay you learned in middle school. And then what really separates good speakers or good writers from great writers and great speakers is internal structure. So when I talk about someone speaking, it’s: What are your three points? What’s your main thesis?

It’s the same stuff you learn, but then, what are you filling in to the inside of it? And typically what’s really compelling is that first principle thinking, and then the defense with some sort of data. So it’s about finding your style and maintaining that structure. And I think it really comes down to making sure you have structure. Too many people are like, “I’m going to talk about conversational marketing,” and then it’s a half-hour later and you’re like, “What?”

The biggest bombshell Patrick dropped when it comes to public speaking, however, has to be the 90-second rule.

Here’s a closer look at how Patrick thinks about structuring talks:

Then I go into each of those points and I think, “Alright, if I’m objective about this, and I’m looking at this particular point, here’s what I think could be a good counter-argument. Alright, I’m going to add a sub-point that addresses that. Here’s another interesting counter-argument, I’m going to add a sub-point.” And you basically fill your time, but you’re constantly going back to that thesis.

5) “The only way to get alignment is by telling the same story in different ways.”

How do you align a company? We’ve talked to CEOs and founders where every week it’s a different concept, and people are like, “I don’t know what I’m supposed to focus on. I don’t know what’s important.” But I want alignment from a visit, all the way through that entire sales process, onto the part that we’re a customer. And the only way I get that alignment is by telling the same story in different ways.

So, what does Patrick mean by “telling the same story in different ways”?

As he explained, it’s all about hitting on that same thesis but finding different evidence to support it:

One pro tip for mastering the ability to tell the same story in different ways: Study some of history’s greatest orators.

Politics aside, Ronald Reagan was known for giving the same speech over and over again, just felt a million different ways. Teddy Roosevelt was known for that. Obama was a little bit like that. But I would find — any maybe pick someone who’s got your politics just so you can stomach it — but basically go read through all of their speeches for two years and what you’ll notice is, “Oh, this is that trope they use, this is that motif they use, these are all these different things.”

And also there are a couple of books that you can get that are just like, the great speeches, and those books — yeah, I’m a little bit of a nerd — those are the things I read. But it’s one of those things where you pick up on what’s going on, what context they brought in, and what metaphors they’re using.

Click below to listen to the full interview. Thanks for reading!

Subscribe on iTunes and catch the full interview with Patrick on this episode of Seeking Wisdom.