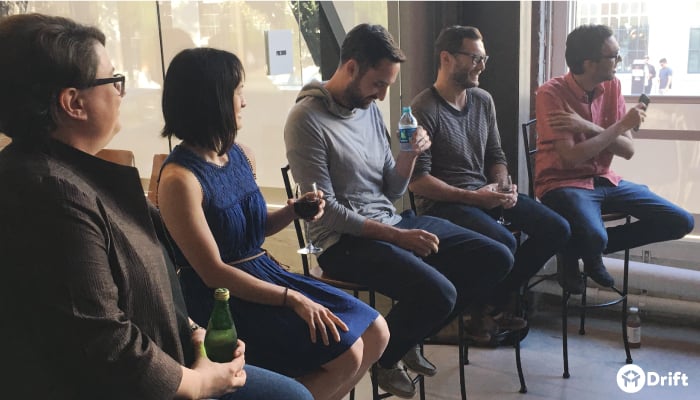 Last week the Drift team went out west to San Francisco to host a meetup with customers, partners, and friends. (Shout out to our pals at General Catalyst for letting us host it in their San Francisco office ?.)

As part of that meetup, we invited a panel of experts to come discuss what’s happening in the world of marketing & growth today.

Instead of doing a question-by-question, answer-by-answer recap of the nearly hour-long panel discussion, we decided to pull out the best nuggets of wisdom and share them with you here. That way you can spend less time reading and more time learning.

And if you end up liking this recap, you’ll definitely need to check out the meetup we did with Segment’s VP of Growth Guillaume Cabane. (The guy is a mad scientist.)

But you can save that one for later, because without further ado, here’s the best advice we heard from Tolithia, Julie, Brian, Yuriy, and Hiten at last week’s meetup in San Francisco.

On What Marketing Channels Are Working Today:

Tolithia: Everything old is new again. Depending on who your target customer is, sometimes a good old-fashioned postcard and some outbound calls can actually catch a customer with less noise in that particular channel than they’ve ever had in recent memory. So those are some of the things that we’re trying at Gusto.

Julie: I would watch influencers very, very closely. For a long, long time, people have primarily made decisions about what products to buy and what to do based on recommendations from friends. And that power of recommendation and influence has never been productized the way it is now with things like influencer agencies and Instagram bots, and this harnessing and the ability to target influencers at scale — it has not existed until recently.

Brian: A lot of the openness of channels from 2000 to 2008 has closed down and what that’s doing is it’s pushing people more towards paid channels. So that’s one trend that I see. The first wave of a lot of the big B2B SaaS companies that we think about today primarily use two strategies:

Those two channels, in most SaaS categories, are saturated to the max. So for someone who’s just starting out today in those crowded SaaS categories, you pretty much have to have a bottoms-up play, meaning some form of viral loops. I’d put Grammarly in this category possibly; of course things like Dropbox; an instant messaging company called Loom, which does these asynchronous video recordings to communicate on your team; Slack is obviously there.

It’s going to be really hard if you don’t have that bottoms-up strategy as an early player to really emerge in one of these channels where these other B2B SaaS players have really made a name for themselves.

Yuriy: It’s reverting a little bit. TV and out-of-home advertising are the two channels that we are really excited about at Grammarly — so what used to be bundled under more “traditional” advertising channels, and we’ve kind of moved away from those because the measurement wasn’t there.

But now there are a lot of interesting things happening there around frequency of conversions in a certain zip code or a certain period of time, and so we’re actually really excited about DRTV (direct response television) and out of home — so that’s stuff like billboards, subways, college campuses, etc. So those are two channels we’re investing in pretty heavily. 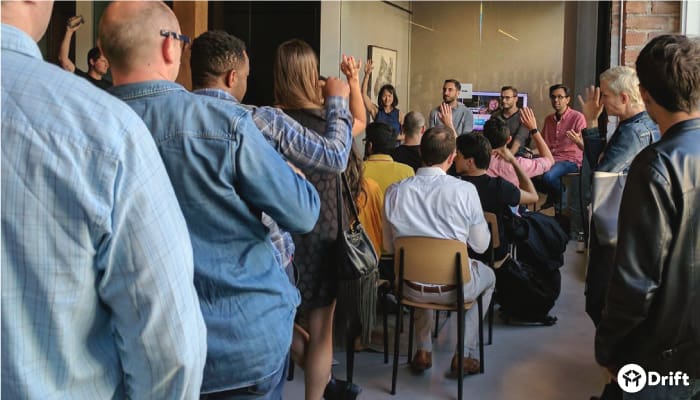 On the Importance of Channel Diversification:

Tolithia: In terms of marketing mix overall, when you start to get to scale, when you’re starting to spend millions of dollars and you have a decent-sized customer base, I do think diversification — for risk mitigation reasons — of your marketing mix is incredibly important. But what’s more important than that is that you’re very thoughtful about the ways in which that different marketing mix actually allows you to read signals on compounding factors between the different channels and messages that you’re using.

Brian: This is important because of what Peter Thiel calls the power law of distribution. It’s this notion that most of your growth comes from one channel, especially in the early days. I think this is the result of something that at Reforge we call product/channel fit.

In the same way that there’s product/market fit, products are built typically to fit specific channels, and over a long enough period of time, enough stuff happens in the ecosystem where that product/channel fit breaks. And companies need to transition to the next channel.

So ones who have done it successfully: Facebook went from mostly web-based channels to most mobile-based channels. People who have done it unsuccessfully: Just look toward the gaming market. So in the early days there were all those Flash gaming guys, and then social gaming platforms came around, and they tried to take their product and plaster it into a new channel, which didn’t work. Which enabled Zynga and all these others. Then mobile came around, and Zynga tried to plaster their games into mobile, and that didn’t work. That created things like Supercell and a bunch of other games. And now we’ve got VR [virtual reality] going on and we don’t know who the winner’s going to be there.

But I guarantee you it’s not going to be the mobile gaming guys.

Yuriy: You have to maintain a certain mindset, or adopt a certain philosophy, team-wide. We’ve had that from the early days. We looked at our channel mix, and we likened it to: It’s drilling for oils and oil wells. So you have your existing channels and they’re producing for you, but you don’t know how deep they are. It’s really hard to predict how much oil is left in your channels, so you have to diversify by mining for new oil wells.

That’s an analogy — but how does it manifest itself practically? You actually have to be carving out times, setting goals around, “Hey, we need to get to a point where 10%, 15%, 20% of our new user acquisition is not coming from this channel,” because you know it’s going to run out whether it’s due to competition or the demographics of that channel shifting.

So you’re hopefully going to build up a cushion, and we’ve seen that in a lot of channels. All of our top channels are channels where we had that first mover advantage. We got there before they were hot. And we were able to maintain that gap, that distance, for some time.

Julie: As someone who’s worked in both product and marketing it always strikes me as how similar the functions are. When you launch a product, no one’s ever going to be like, “OK, that’s the last version of the product, people are going to be happy with it forever.” You constantly make updates, you constantly look for ways to improve it, and to match what users are expecting now. You marketing strategy should be the exact same way.

Whatever you’re doing now, it’s not going to be the ideal marketing mix even a year from now, or even six months from now. So how do you decide what to add to your product? You interview your current users. You interview competitors. You watch for trends in the marketplace, you make some gut decisions. Same thing with marketing mix.

A lot of companies, for instance, in 2012, were hesitant to jump on Facebook mobile ads. Because they thought, “Oh, Facebook has not been very successful on desktop, how can we compete against everyone else that’s out there? But other people who looked at Facebook saw the massive amount of audience that they had and the captivated audience that they had, and saw, “OK there’s an opportunity.” And there are tons and tons of other channels like that out there.

Tolithia: One thing I try to challenge my teams on is: invent something then. So in the mid-2000s, there was this big evolution of affiliate marketing…And then everyone was focused on lead gen for a while where they were collecting all of this data and selling cold data packets. So one of the things we did at Esurance was we went to those publishers and we said, “No, here’s what you want to do, you want to AdRank, algorithm-based click marketplace with the top brands at the top and we’ll pay you on a CPC (cost per click).” And then that became the dominant channel for the unexpected lead volume in that category.

A similar example from the team at Gusto today is, we wanted an in-market target that exists on GDN (Google Display Network) to be available on YouTube, and Google hadn’t built that out. So my scrappy team just went and figured out all of the triggers they would want it to be on, which videos and other indicators, and then worked with Google to convert that into an in-market trigger after the fact. 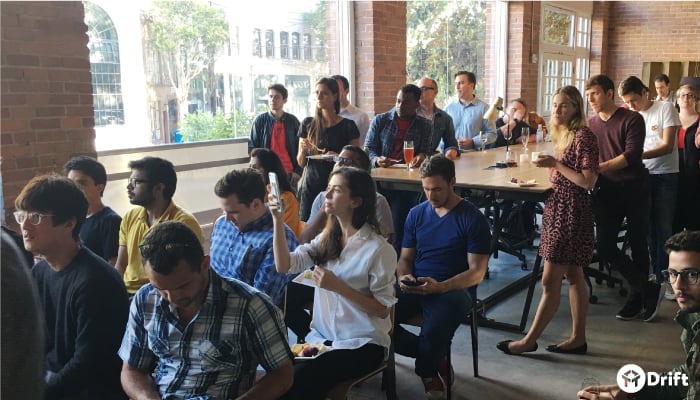 And I think they’re all shit. These are all hacks we’ve used to pick one metric that ties marketing and sales together.

In my experience, in a multi-channel sales environment, it is marketing’s responsibility to optimize the entire funnel end-to-end. And we should not expect sales to even spend time and cycles trying to have the vantage to understand that entire funnel, we have to take responsibility for that.

Consequently, we serve them in the same way we serve the business overall. Whatever the stupid acronyms there are for these things, we should care most about the output. My marketers need to understand what it takes for a salesperson to take a particular kind of lead all the way to close.

Brian: Rotational programs. So this is really common in engineering programs, so now I’m thinking, why haven’t I seen this more on the marketing and sales side? Make the marketers go sell, and make a salesperson go market, for four to six weeks. And this is really common in engineering programs that build empathy with other types of teams, so it’d be interesting to see what that would look like.

Yuriy: The growth team at Grammarly, the team I lead, we’ve been focused on the consumer product, and we’re now getting to a point where we see a lot of potential especially with self-serve enterprise –like Slack, and Dropbox, and the Zendesk model to an extent.

So the way we’re partnering with our sales team is we’re thinking about potentially building out a self-serve enterprise product. Who should we talk to? Our customers. We should be figuring out “What do they value most about our products?”. And we can use our sales team to point us in the right direction because we already have some enterprise customers. As a growth team we never bothered to talk to them really because it wasn’t a focal point for us.

Julie Zhou: I just flew back from Salt Lake City where the majority of our sales team and support team sit, and one thing I was struck by was our sales and support teams sit together, right next to each other. So that results in unbelievable empathy for the user and unparalleled understanding of the product.

When I flew back I immediately thought: We need to get all these people on a plane and plop them into our office in San Francisco and make everyone there just listen to them because that is a visibility that we just do not get just sitting behind our computers. So it’s the merging of sales and support in terms of how they think, and then getting them in front of our product and marketing teams.

Thanks for reading! Be sure to sign up for our newsletter so you can hear about where/when our next meetup will be.

See why thousands of businesses are using Drift to generate lead and close deals faster.