41 Plays From The Drift Marketing Team To Help Your Business Cut Through The Noise, Grow Faster Than The Competition & Thrill Your Customers

By the Drift Marketing Team with a foreword by Mike Volpe, CEO of Lola, former CMO HubSpot

Get Your Free Copy Now 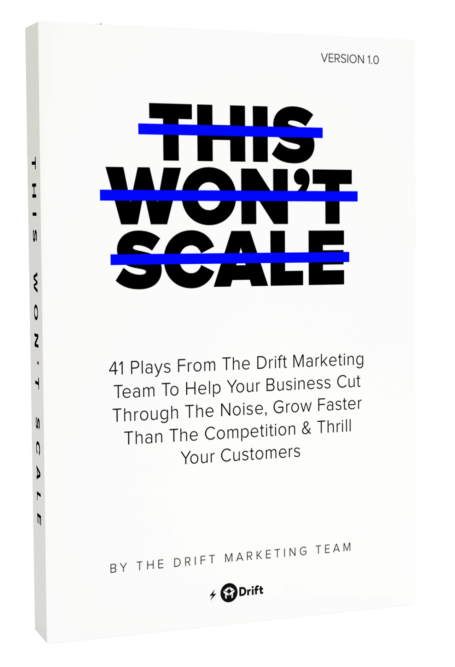 Cut Through The Noise, Grow Faster Than The Competition & Thrill Your Customers

$15 million in Series A funding before they had a product.

An additional $32 million in Series B funding only 18 months from the launch.

Another $60 million in Series C funding in just two years.

Drift is killing it.

And it’s not just because they have an experienced founding team, a customer-driven culture and a great product.

Today, those things should be table stakes.

And while there are many factors that have contributed to Drift’s hypergrowth, a key driver has been their unusual approach to marketing.

Instead of spending all their time looking at dashboards and worrying about funnel metrics, the Drift marketing team has focused on creating great experiences.

Instead of adopting aggressive lead generation tactics and desperately trying to push potential buyers down a funnel, they’ve treated people as people, rather than leads.

Instead of worrying about whether or not something will scale, they’ve focused on doing marketing that doesn’t feel like marketing. And by caring more about conversations than conversions, they’ve been able to build an emotional moat around the company.

For a new startup to break out the way they have in this day and age is inspiring.

And in this book, the Drift marketing team will share their secrets on how to grow your business with 41 seemingly unscalable plays.

Thrill Your Customers & Beat the Competition

This Won't Scale will show you how in 41 unique marketing plays.
Get Your Free Copy Now