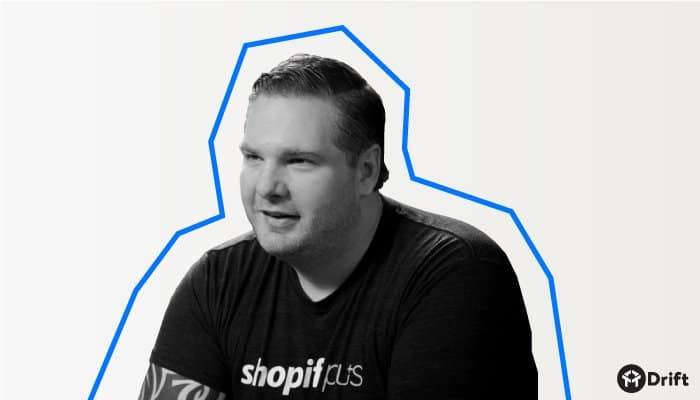 A few years back, Loren Padelford was offered a seat on a rocketship…

And he took it.

That rocketship was the Canadian ecommerce company Shopify, and his “seat” was running their enterprise solution, Shopify Plus.

We started with five sales reps and had no idea what we were doing. And that’s literally how we started it. We hired straight out of university. No sales experience.

Fast forward to the present: As the VP and General Manager of Shopify Plus, Loren now oversees a team of 300+ people, and they’ll be hiring another 300 to 500 over the next couple years.

And it all started with a handful of sales reps.

We recently visited Loren up in Waterloo, Ontario to ask him about his experience building the Shopify Plus sales team. During the interview, we got him to share his sales hiring secrets, as well as some best practices for improving sales performance.

Check out the full interview with Loren below:

In a hurry? I pulled out eight key lessons from our interview with Loren that you can read right here:

1) “With some sales reps, the more you try to scare them, the more excited they get.”

The early days of a startup can be hectic. That’s why for Loren, it was important to set realistic expectations for his very first hires.

I scared them as much as I could about the job. I was like, “This will suck. We don’t know what we’re doing. You shouldn’t take this job. You’re probably going to get fired in eight months and we’re all going to get buried.”

But here’s what Loren discovered: The best people for those early sales roles, the ones Loren ended up hiring, were those ones who thrived in that type of uncertain, “scary” environment.

What was fascinating was with some people, the more you tried to scare them, the more excited they got. And so the people who were left at the end were the ones who were like, “This is amazing!”

2) “Until you’ve proven something, you shouldn’t get a nice office.”

While Shopify has “glorious” offices in Ottawa and Toronto, that’s not what Loren wanted for his Shopify Plus team.

I was like, “We’re not doing that right. Until we’ve proven something, we don’t get a nice office.”

For Loren, employee perks — like a decked-out office — are things teams earn after they’ve had a proven track record. They should be seen as goals, not things that sales teams get by default.

I grew up playing sports, and you didn’t get to claim ownership of the awesome stuff until you went through the ditch. Go do something and then come back and tell me how awesome you are. And so that’s kind of what I was saying: “We haven’t done anything yet. Shopify, they deserve their big office. They’ve been around. They have hundreds of thousands of customers. What do we have? Nothing.”

And it was also a goal. I wanted the team to own it. I wanted them to feel like if we did this thing, they could look back and say “I did that,” which creates a different emotional state for people. That was important.

3) “The only successful salespeople are the ones who add value.”

“Helping is the new selling.”

Sure, it makes for a nice quote. But as Loren pointed out in our interview, the idea of a salesperson being helpful isn’t really all that new.

There are some things that are always the same. The only successful salespeople are the ones that add value. That’s always been that way. So you just have awesome products and you’re a walking brochure? Nobody cares. If you don’t learn how to add value, you’re not going to survive.

4) “Sales technology has moved from black magic to science.”

In his 20 years of working in sales, Loren Padelford has encountered just two salespeople who he describes as “magic.”

People just bought things from them. I don’t understand how. I don’t know why. It’s like they’d walk in rooms and people would hand them money.

However, as Loren explained, the odds of being born with a superhuman ability to sell are astronomically low. (Remember, in 20 years, he’s only met two salespeople who had “the gift.”)

That means in order to improve performance, salespeople need to turn to science — not magic.

Technology has moved from this black magic, where you’re a magician sales rep who magically has deals appear, to the science of it. And I’m a big believer in sales as science. This is process engineering. You either are good at process engineering and you understand the component pieces, or you don’t. There’s no magic here.

5) “As a sales rep, you have to start with your own behavior.”

One of the biggest takeaways from our interview with Loren:

Or as Loren put it:

You have to start with your own behavior. As a sales rep, how many calls do I make? What’s my own conversion ratio between initial call and second call? Initial call and demo? What’s all the math that governs my reality?

As a sales rep. I don’t control revenue. I don’t wake up every day and “do quota.” That is not a thing. That is an output, not an activity. What I do everyday is activity.

True, your sales reps aren’t Michael Jordan (or Scottie Pippen). But the lesson applies just as much to sales as it does to basketball — you just need to think of free throws as sales calls.

This ties back to Loren’s point about focusing on behaviors and activities, not outputs. Because ultimately, if an entire team of reps can improve their behaviors just a little bit, the effect on overall output can be massive.

Imagine if you actually lined up sales as a manufacturing process. So in the front end is leads and at the other end is revenue. And you have all the steps in the manufacturing process: make a call, send an email, do a demo, do a follow-up, go onsite. If you just worked every day to tweak them and make them incrementally better, the net aggregate impact is enormous.

7) “Sales is a long-term game. And in order to win, you have to understand what you’re doing.”

Remember: Sales is science, not magic.

And while luck can serve anyone well in the short-term, in order to succeed in sales for the long haul, there’s only one option:

You need to know what you’re doing.

Most sales reps I’ve ever met, and most sales managers I’ve ever met, could not explain to you how anything happened in their org. What they tell you is like the Dr. Zeus version of everything, which is like, “Once upon a time in a land far, far away, I had a customer who I really felt like they would buy.” You felt like they would buy? “I feel like I should have a Ferrari. I don’t have one, but I feel like I should.” What are we doing now? Talking about how we feel about stuff?

Loren’s point: your gut instincts about who’s going to buy and who’s not isn’t based in science. The bottom-line: The only way to succeed in sales in the long-term is through tracking, evaluating, and improving behaviors.

Here’s a parting lesson to keep in mind the next time you interview someone for a sales role.

During the interview, pay attention to how candidates evaluate their own performance. As Loren explained:

For Loren, the best sales hires are the ones who are interested in the science behind what makes them successful.

We did an interview with one of the first reps that we had into the organization. I was giving him information and he’s like, “I don’t understand this. Can you get up on the whiteboard and explain it to me.” And I was like, “Oh, I kind of love you already.” Because his brain was working in this way that was like, “Explain this to me with math. I want to see a process.”

So when I interview people, I’m looking for people who will break down performance into its piece parts and say, “Performance is not random. Performance is built.”

Subscribe on iTunes and catch the full interview with Loren on this episode of Seeking Wisdom.