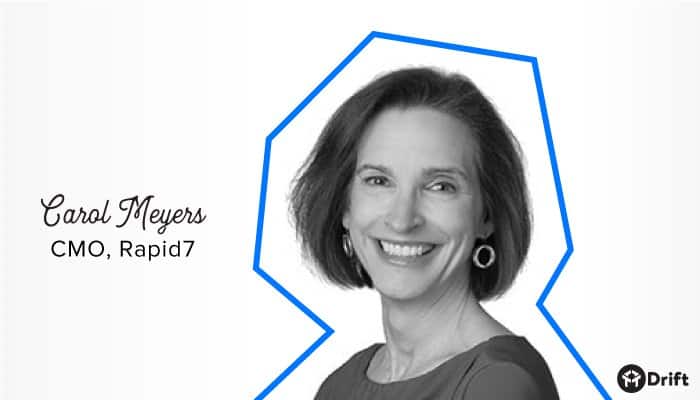 Carol Meyers has been through four — yes, count them, four — IPOs in her storied career:

And FYI: Those four IPOs were worth a combined $2.5 billion in market value.

Carol also advises and sits on the boards of half a dozen organizations, including at WordStream, MineralTree, and Brandeis University. Go ahead and drop by her LinkedIn profile and try to scroll through all of the companies she’s advised over the years. (You’ll need to clear your schedule if you want to get through them all.)

So needless to say, we were beyond thrilled when Carol agreed to participate in a “fireside chat” with Drift’s director of marketing, Dave Gerhardt, at our inaugural Drift Roadshow event in Boston.

Excited to be at the launch of the @Drift Roadshow waiting to hear the amazing wisdom of @CarolJMeyers and Dan (DG) pic.twitter.com/6syxfZMjiJ

If you weren’t able to attend, don’t sweat it: We recorded the entire thing.

You can watch our full interview with Carol below.

In a hurry? I’ve also pulled out six of the most tweeted-about lessons from Carol that you can read below.

1) “The one constant in marketing is: Why should the customer care?”

The one constant in marketing is: “why should the customer care?” Via @caroljmeyers on the @Drift #RoadShow

Throughout Carol’s career, first as a sales leader, and then as a marketing leader, there’s always been one constant to her approach:

Figuring out WHY customers should care about what you’re offering. That’s the bedrock of any marketing strategy. As she explained:

The thing that’s evergreen in marketing is having to know your customer. Whatever it is you have — people, solutions, services — why are they going to care about this thing? What’s going to be better about what you’re doing? How are you going to solve their challenges? Why should they spend any time even thinking about you?

This is a philosophy we try to follow here on the Drift marketing team. We operate under the assumption that nobody cares about what we’re doing, and that it’s our mission to show people why they should care.

Ultimately, as Carol explained, getting people’s attention is a constant battle. So if you can’t convincingly answer that question — why should the customer care? — you’ll be at a disadvantage from the start.

When you think about it, one of the biggest challenges that we have is, even though you say, “I know they have that problem, and they need to solve it!” They have a lot of problems. We as buyers and consumers of things are always trying to figure out: what is the most important problem for me to spend my time on right now? So there’s a lot of convincing you have to do.

So I think the evergreen things are really trying to understand the customer and why you have anything to offer to them. And then you can use the right tactics to get that out there.

.@CarolJMeyers on hires “nothing more important than to hire great people.” – how assertive are you – urgency vs patience – play with rules or formal – you should know this and skills of candidates when it come to recruiting. @Drift @50skillsInfo pic.twitter.com/vAFwAFeWVc

Carol leads a marketing team of about 50 people and has a ridiculously busy schedule. Yet she’s still determined to be involved in the interview process for every single new hire. Why?

I truly believe there’s nothing more important that you can ever do as a leader other than to hire great people. Because the only thing that really makes companies work is fabulous people. And they have to be great at what they do, they have to be able to work with the people around them and create really good energy. So I’m always looking for those things in everyone we hire.

Of course, hiring great people is often easier said than done. According to Carol, this is especially true in Boston (where Rapid7 is based).

Interviews can be tricky. People can convince you that they might be able to meet all that criteria. The other thing that happens is, it’s really hard to hire in Boston and so jobs stay open for a long time, and every once in awhile, a hiring manager gets kind of tired, and they meet someone and they know they’re not the right person. But they’re super tired and they’re like, “Maybe it’ll work.” So every once in awhile you need someone to come in and say, “No, we need to wait.” Never fill the role until you find the right person.

3) “One of the biggest mistakes young companies make: They don’t have a plan to get to the big growth number.”

As a young company, it’s easy to become blinded by a big, flashy growth number that you’re trying to hit. But as Carol observed, a lot of these young companies fail to do one crucial thing:

They don’t come up with an actual plan for hitting that number.

What I see a lot of companies do is put up huge numbers that they think they’re going to hit. And when you ask them, “Well, here’s where you are today, and here are your marketing metrics and sales metrics, and I don’t see how you get to that number. What is it about the process you have right now that you can just pour gasoline on it and have more come out the other end?” And often that’s where the plans fall down a little bit.

When Carol advises companies like this, here’s what she has them do:

So I’ll usually ask them to go back and do some homework. “Let’s really break down what are the things, and if I give you another $5 million, how are you going to spend it and how are you really going to get there?” … I usually find by the next board meeting they are telling us that they aren’t really going to hit that original plan and they’re revising it.

When Dave asked about Carol’s biggest mistake she’s made as a marketer, she initially pointed to some social media fail-bombs. (Hey, we’ve all been there.)

We’ve tried so many things from a marketing perspective that haven’t worked. It hasn’t been really big money. We’ve run some contests that have bombed, thinking: “This will be great. Everyone’s going to go crazy and social media’s going to light on fire. And it doesn’t.”

But then Carol hit on a broader point: that most mistakes aren’t the result of taking action and experimenting — they’re the result inaction and being idle.

“ABM is not the holy grail.” Amen. @CarolJMeyers @Drift

Carol’s biggest pet peeve with marketers? We tend to copy each other. Or as she put it…

We’re lemmings. We are such lemmings. We’re always reading these studies about when to send an email, or when to make a phone call, or ABM.

Of course, we’re fans of account-based marketing (ABM) at Drift, but we get Carol’s point — putting all of your eggs in that one basket doesn’t guarantee success.

I mean, ABM is great. But it’s not generally going to solve world hunger and it’s probably not the only thing you should be doing in marketing. Usually you have to do a couple of different things.

6) “Have a voice, have confidence in yourself, and be a part of the strategic conversation.”

“Have a voice, have confidence in yourself, and be a part of the strategic conversation” – @CarolJMeyers‘ advice to women on growth #womenatwork #womeninbiz #Driftroadshow

“What advice do you have for women who want to become more senior leaders in their fields?”

That was a question Carol got after we opened up our fireside chat to some Q&A. I’m going to leave you with her response to close out this post:

I actually just came from the Mass. Women’s Conference today. I think the most important things are to have a voice, to have confidence in yourself, to try to make sure you don’t just focus on getting things done and results, but being part of the strategic conversation, and picking your head up and focusing a lot on good delegation and developing people. I think those are the really big, important things.

Click below to listen to the full interview. Thanks for reading!

Subscribe on iTunes and catch the full interview with Carol on this episode of Seeking Wisdom.