What A CEO of A Growth Stage Startup Does On Sabbatical 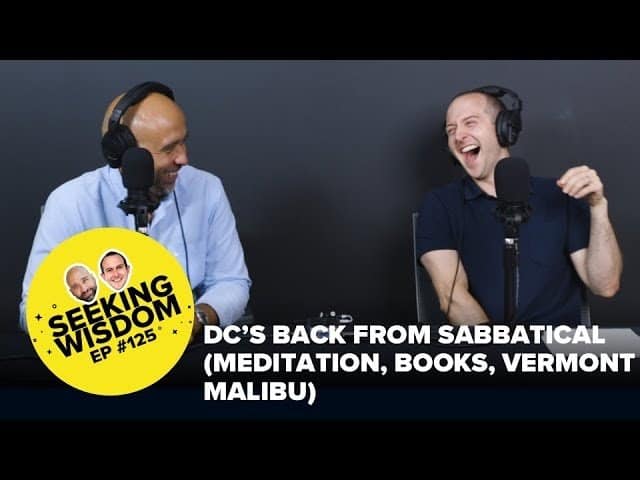 Taking a sabbatical, for most people, means kicking back and catching up on long-neglected TV shows.

If you know anything about Drift co-founder David Cancel, though, you know he’s extremely intentional about everything—sabbaticals included.

So it’s no surprise that when DC took his one-month sabbatical (at three years instead of the usual five), he learned some things. From Vermont to L.A., from inside the pages of books to outside on a scooter in Malibu, he had some stories to share.

If you’re set to take a sabbatical sometime soon, you can learn a lot from how DC spent his month off.

Probably the most important thing to do when you prepare to take a sabbatical is to set intentional goals for yourself.

These don’t have to be (and probably shouldn’t be) lofty or even heavily business-oriented goals. They can be simple, relaxing, enjoyable. The key is to make them intentional.

When DC and ET came up with the idea of a three-year sabbatical, they knew they wanted to rally the idea around pushing people to learn something new. This learning didn’t need to be at all related to Drift: people just needed to be learning something.

In DC’s case, he had three simple goals:

That last one was big. DC successfully practiced meditating for 30 consecutive days, without using any apps. He’d tried meditation before, in a variety of ways. This time, he followed the advice of Brad Stulberg, his performance coach. (If you haven’t read Brad’s killer book called Peak Performance, do yourself a favor and check it out.)

On DC’s monthly call with Brad, his coach suggested reading two books on meditation and to try a different approach to the practice during the sabbatical.

Instead of doing active meditation (e.g., box breathing, where you do something to distract yourself into a meditative state), Brad suggested trying mindful meditation (focusing on the breath and dealing with distractions that come up).

So DC had a crystal-clear goal going into his month off: practice mindful meditation for 20 minutes a day, every day. It wasn’t a stressful or hard-to-achieve goal (quite the opposite), but it was a goal nonetheless.

His takeaway, from both the meditation and the sabbatical overall? He was able to have a kind of out-of-body experience. Not in a mystical, movie-like way, but in a way that allowed him to observe himself and observe Drift from an outsider’s perspective. In just 20 minutes a day, he eventually could see the areas where the company needed help and the places it needed to double down on.

If you ever need to know why sabbaticals are beneficial, there’s your answer. You would never notice things like that if you continued to operate in the day-to-day.

By the way – you should join the thousands of other sales & marketing professionals that subscribe to receive our Seeking Wisdom content by clicking here.

Should You Document Ideas While Taking a Sabbatical?

Before taking time off, DC had it in his head that he would write down all the important things that came to his mind.

In the end, he wrote nothing down.

All those interesting things he learned after reflecting on his meditation stuck with him. For some people, writing things down might be overrated anyway. The right stuff comes back to you, and it keeps coming back to you.

That’s how you know it’s right. Especially if it matches an ongoing theme.

DC spent several weeks in Vermont taking his daughter to equestrian competitions. In the hot, dusty, phone-service-deprived barns of Vermont, he had a breakthrough.

He didn’t complain. He never asked what was next. He wasn’t focused on progression, documenting, or anything like that. He just sat back, and let things happen. He became an observer.

“I wasn’t anxious about the next thing,” he said. “I just was in the moment.”

Trust that the right ideas will get back to you, even if you don’t scramble to capture them. 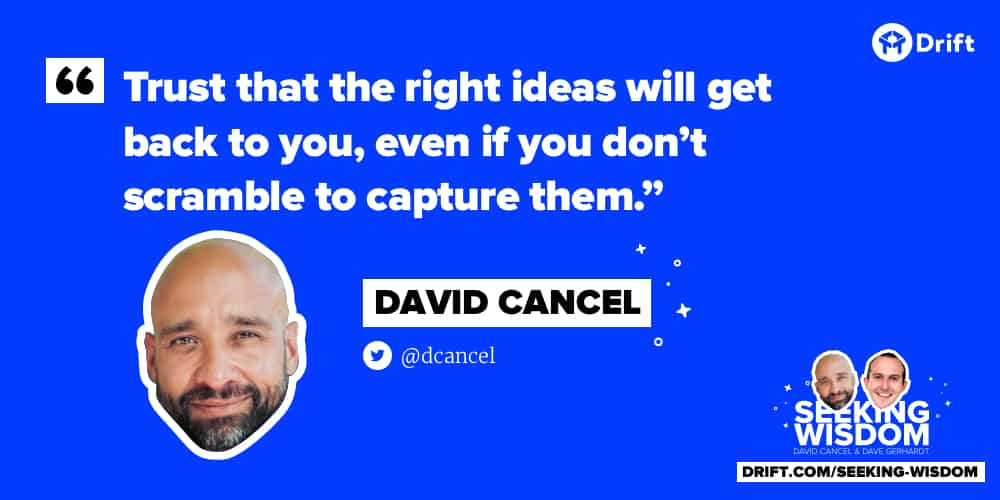 Why Books and Sabbaticals Are Made for Each Other

Reading books fits in perfectly with the “learning” emphasis around Drift sabbaticals.

During July, DC read (almost) eight books: two on meditation, three he’s finishing up, and three books by Daniel Coyle. Someone recommended Coyle’s The Culture Code, and DC liked it so much he went back and read his other work, The Talent Code and The Little Book of Talent.

The amazing part was that some of the ideas in those books overlapped perfectly with ideas that had been brewing in his head for a while. Specifically, they explored the idea of focusing on people.

“All problems are really people-based problems,” DC said. The books happened to fuel and clarify his understanding of that truth.

Maybe Try to Meet Some Famous People, Too

While you’re on sabbatical, you might as well have a little fun.

Near the end of July, DC spent some time in L.A.—the anti-Vermont. He saw one of the Kardashians. While riding a Bird scooter, he came around the corner and saw Arnold Schwarzenegger on a bicycle. Then he saw Mike D. from the Beastie Boys walking around with no shoes.

(He also got a ticket in Santa Monica for riding a scooter with no helmet. That part is not recommended.)

The point is, you should ride scooters on your sabbatical. You should do things that let you tell stories later. And you should do whatever it takes to get outside yourself and find out what really needs to happen in your life, both personally and professionally.

Whatever you do, make it count.

Want to be a fly on the wall as DC and I talk through these ideas? Watch the full video here.

And here’s the Seeking Wisdom podcast episode to take with you on-the-go.

P.S. – Not familiar with Drift? No problem. Take Drift’s bot for a test drive on your website in seconds, without installing any code.