How to Build a Movement: 3 Lessons From Terminus CMO Sangram Vajre 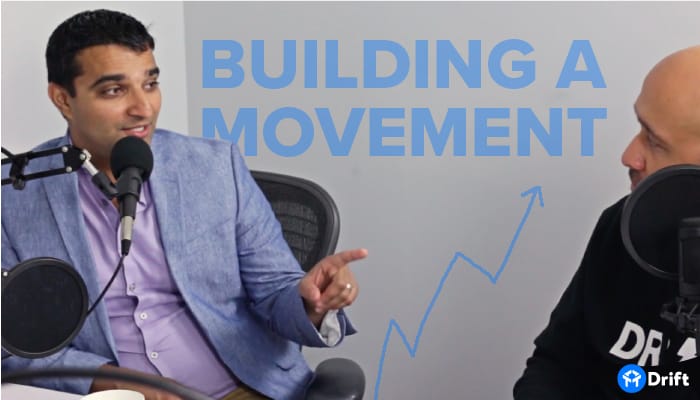 If you’re reading this post right now, I’d say there’s a 99% chance that you’re familiar with — or have at least heard of — account-based marketing (ABM).

See, in addition to being a CMO, Sangram’s the founder of the B2B marketing community #FlipMyFunnel, as well as the author of the first-ever book on ABM, Account-Based Marketing for Dummies.

Ever see one of those graphics with the upside-down sales and marketing funnel (like the one I made below)? 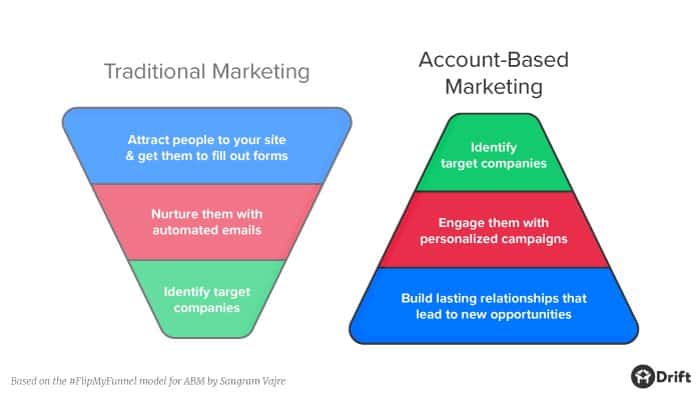 He took what started out as a promising idea and turned it into a movement that has influenced thousands of markers around the world.

So when we had the opportunity to interview Sangram on Seeking Wisdom, we had to ask him:

How did this movement get its start? And what are some best practices for marketers and salespeople who want to start movements of their own?

I pulled out three lessons for building marketing movements that you can check out below.

You can also watch our full interview with Sangram right here:

Subscribe on iTunes or your favorite podcast app and catch the full interview with Sangram on this episode of Seeking Wisdom while you’re on the go.

1) Focus on a Problem (Not on Yourself)

This is probably the most important lesson on the list.

If you started reading this post and thought to yourself, “Hey, creating my own movement would be so fun, and it’d do wonders for my personal brand,” you’re off to a bad start.

I don’t think anybody starts by thinking, “Hey, I want to create a movement.” That’s definitely not how I started out. It wasn’t until six or eight months later that somebody said, “Hey, this is a movement.” And I was like, “What? This is a movement? That’s great!”

In a way, #FlipMyFunnel was started by accident. Sangram didn’t really set out to build a movement, he set out to solve a problem.

By working at that problem and inviting other marketers to help him solve it, he was able to create a thriving community.

We were in the motion. We were just doing it and doing it one day after another… It was really, really lucky that we fell into this, that we focused on the problem. We did not focus on us.

So, what was the problem that Sangram focused on solving?

So when you think about that, it just tells you that: Sh*t: If I’m spending all this time generating this crazy amount of leads and if they don’t turn into customers, especially if I have a longer sales cycle, and a bigger deal size, and more complex sales process, then I’m going to be wasting a lost of time, energy, money, and resources.

So we just moved on that. This is the problem that everyone’s facing and we’re going to challenge the status quo on it.

Five years from now, however, marketing and sales teams will likely be facing a different set of challenges.

As Sangram explained, “Every five years there’s magic, or a change that happens in the marketing and sales world.” 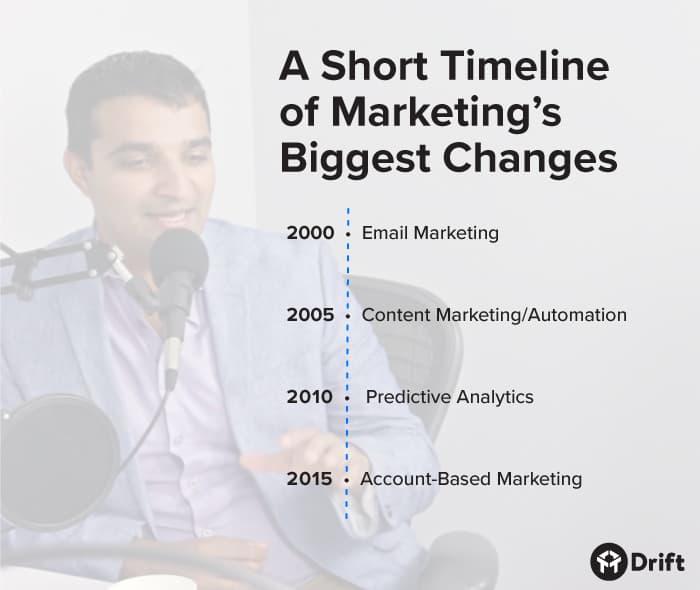 Then, as Sangram explained, in 2005 we had the rise of content marketing and marketing automation, and marketers became obsessed with generating as many leads as possible.

By 2010, sales teams were fed up with the poor lead quality they were seeing. That’s when predictive analytics came onto the scene, making things like lead scoring possible.

The whole point of the last 15 years, the problem we were solving for was, “How do I optimize for the right person, at the right time, with the right product I want to sell?” So finally, with ABM we just went in a different direction than just generating more of the same… So I think it’s a natural evolution, but the problem is still the same: How do I give my sales team the best opportunity to win? And that’s the business I think that Drift is in, and Terminus is in, and that we are all in.

2) Build Authority in Your Market

Becoming an influential voice in your market requires more than sending a few well-crafted tweets.

First things first: You need to rally people around the problem you’re focused on solving. And for Sangram, that means making a clear distinction between your product and the movement you’re trying to grow.

When we fell in love with the idea of talking about the problem as opposed to our product, it took away all the restrictions. Because whenever you’re talking to somebody about your product, you feel like you’re pitching. But when you talk about a problem, now there’s a common bond between you.

Sangram even took the step of separating his company (Terminus) from the #FlipMyFunnel conferences that he runs.

That means Terminus doesn’t get any special treatment — they have a booth at the conferences just like everybody else.

We’ve got our competitors in the space, the thought leaders, anybody who could actually talk about the problem, we gave them all a platform. And we did that at hyperspeed, we did a conference almost every two months. Every two months we went to different cities talking about this problem just evangelizing that this is a problem… And when we got everyone behind the problem, everybody started looking for a solution. We happened to be one of the solutions out there.

Of course, not everyone has the resources to tour the country with their message, so we asked Sangram about some of the other tactics he used to grow #FlipMyFunnel.

Here are the two secrets he shared:

In the early days, Sangram would get in front of a whiteboard, write out the person’s name he was reaching out to, and then shoot a short video of himself and send it to them.

This was his preferred method for recruiting new conference speakers, but it could just as easily be applied to any kind of outreach (e.g. asking someone to write a guest post for your blog, recruiting an influencer to share one of your posts, etc.)

Sangram admits that using personal videos might sound unconventional, and that not everyone will want to put themselves out there like that.

But for those who do, you’re able to make a much more personal connection from the start.

Nope, we’re not talking about an ebook.

We’re talking about publishing an actual book. To quote Sangram:

People download ebooks and forget about them, but people don’t throw away a book that’s on your table.

The bottom-line: If you want your movement to leave a permanent mark on your industry, you need to share your ideas in a more permanent format.

With so many ebooks flooding the market, writing and self-publishing a book that you can share hardcover and paperback copies of (and sell on Amazon) can help you set your movement apart and give it more legitimacy.

3) Appreciate the Value of Time

When it comes to forging those personal connections that will help a movement grow, it’s important to remember just how valuable of a resource time is.

I think it all comes down to this idea of time. Cut all the things that are going to be in between you and that personal connection that you have. Time has such incredible value, we just under-appreciate it.

Ultimately, time is the reason why megatrends like messaging and video have arisen:

Those technologies save people time, like — as Sangram mentioned — the time it takes to fill out a form:

When we ask someone to fill out a form, well it makes you wonder, “Why are we putting up so many blockers?”

With messaging, you can have a conversation with someone in real-time and start building a relationship immediately, instead of forcing people to wait.

With video, meanwhile, you’re able to let someone see and hear you without you having to be there in person — Sangram calls it “the next best thing to a face-to-face conversation.”

Just like messaging, video can help you deliver a more personal experience and help you build relationships faster.

Instead, they form around big, radical changes, like flipping your sales and marketing funnel on its head.

So if there’s a marketing problem you’re itching to solve, don’t be afraid to abandon the tried and true methods of old and try something unconventional.

(And FYI: if you want to hear more unconventional marketing wisdom from Sangram, you can come see him speak at our HYPERGROWTH conference in Boston on September 25th.)