When to Bring on a Management Team at Your Startup 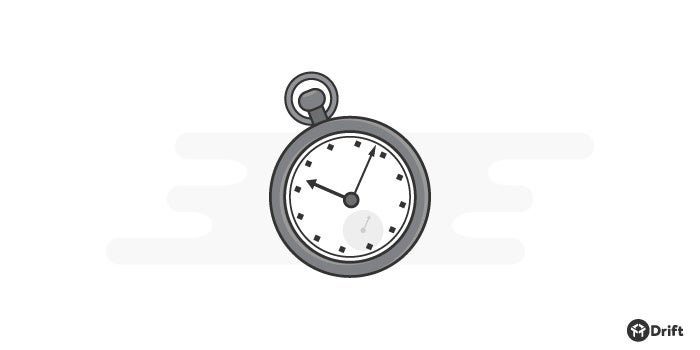 It’s a conversation I’ve had many times with many fellow entrepreneurs over the past 20 years:

How do you know when it’s time to bring on a management team?

In the early days of a startup, hiring seasoned executives usually (and rightfully) takes a back seat to building a product and finding product/market fit.

But when it comes to scaling your business, the general consensus is that you need to bring on a management team or you risk having things devolve into chaos.

HBR recently looked through 75-years worth of organizational research and identified four critical activities for successfully scaling a business.

The first two activities they mention?

The tricky part, of course, is figuring out when you should hire these functional experts and add these new structures.

There’s also the challenge of figuring out who you should hire for those management roles: external industry veterans or internal up-and-comers who may have already been doing the job?

While there isn’t a single correct answer to these questions, there are a few best practices that I’ve learned (the hard way) over the course of launching and scaling five companies.

The Dangers of Bringing on Management Too Early

The more common mistake I see companies making isn’t adding management too late, but adding it too early.

When you’re still in that stage of being a lean, mean, product-building machine, too much structure can hinder communication and slow you down.

In those early days, you usually can’t afford to have dedicated managers anyway. You need player/coaches: People who can both do and lead.

Bringing on a veteran executive from some multi-billion dollar company at this point in your startup’s growth might get you headlines, but it likely won’t get you the results you’re looking for.

I’ve heard stories of seasoned executives moving to startups and being shocked to discover that they had to get their own coffee (the horror!). So clearly, culture fit can be an issue.

It’s a “horses for courses” issue (i.e. pairing a racehorse with the racecourse it’s best-suited to run on). Only in this case it’s about pairing an executive with the stage of a company’s growth that he or she has the most experience working in.

Think about it: If you’re a 15-person startup with less than a million dollars in revenue, what use would you have for an executive who’s worked most of his or her career at a company with tens of thousands of employees and billions in revenue? The skillsets usually don’t match up.

You need to find the right horse for the right course.

The Evolving Role of the Executive: Four Stages

I recently learned about the “four stages” of an executive’s role via the High-Growth CEO Forum.

While I’ve always held similar views around how the executive team’s responsibilities should evolve as a company grows, this was the first time I really saw these ideas codified (and presented in a classroom type setting).

Here are the four stages:

As your company moves through these four stages of growth, and your executives shift what they’re focusing on, the skillsets of those executives also need to shift.

In the startup stage, you need those doers/decision-makers that I mentioned earlier. They’re people who can lead and operate on the front-lines.

When you reach the initial growth stage, however, you need executives who are a little more hands-off, and who are masters at delegating tasks and giving direction to their teams.

In the rapid growth stage, executive responsibilities expand beyond coordinating a team’s efforts to include building out the team and planning for long-term growth. Executives at this stage need to be expert communicators and they need to take a more active role in coaching employees.

Finally, in the continuous growth stage, executives move from being team-builders and planners to organization-builders and strategic innovators. They affect changes across hundreds if not thousands of employees and are the chief stewards of a company’s culture. 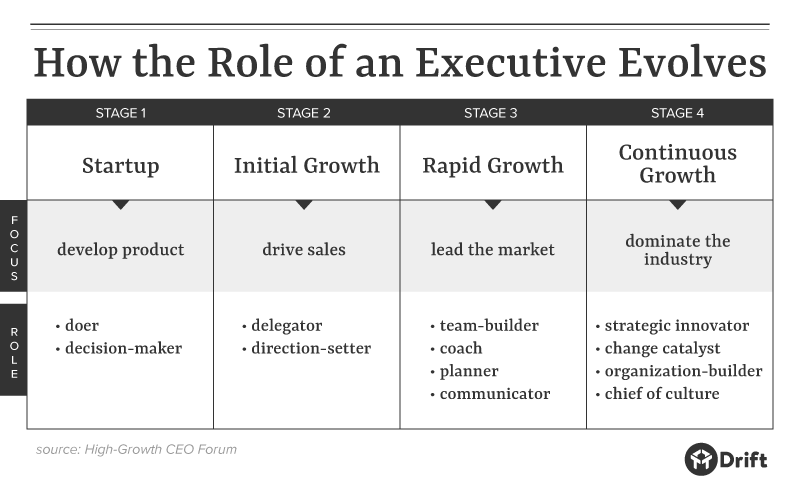 Rarely is someone able to start their career as an executive at a company and progress as fast as the company is growing.

Imagine two lines: one is the growth rate of the company and the other is the rate at which a manager/executive is able to learn and evolve. Having those two lines follow the same curve through all four stages of a company’s growth is incredibly rare.

That’s why it’s a big deal when you see a founding CEO take their company public: It doesn’t happen very often.

The secret to knowing whether it’s time to bring on an external hire — or whether it’s time to promote someone internally — is to look at the stage your company is in and see if your current managers have what it takes to get you to the next stage (they should be reading Peter Drucker).

Something else to consider: Research out of Wharton shows that external hires get lower performance evaluations during their first two years compared to internal employees who get promoted into similar roles.

Meanwhile, those same external hires get paid around 18% to 20% more than their internally promoted counterparts, and they have higher exit rates.

All this to say: hiring executives from outside of your company is a big deal. It’s expensive. It’s risky. And it can potentially lead to company in-fighting if existing managers aren’t keen on giving up responsibilities they’re used to owning.

But when you start getting into those third and fourth stages of growth, hiring externally to build out your executive team almost always becomes inevitable.

Let’s look at Slack as an example.

Three years ago, Slack had zero revenue. Today, they have around $100 million or so in ARR. How many sales managers do you know that could’ve evolved their skillset at that same rate?

The first year of sales for a startup is all about being scrappy, and signing up every customer you can. Fast forward three years later and the sales environment is entirely different. It’s super process-driven.

If you were the first sales manager at Slack, being the VP of sales or CRO today would mean that you had the skills necessary to be a great leader at the  $0-to-$1 million stage, and that you have the skills needed right now to grow Slack from $100 million in revenue to $250 million.

I don’t know a lot of humans who look like that.

So my litmus test for figuring out if (and when) external hires are necessary is to see if the current leaders are excelling — or just getting by — in the stage they’re currently operating in.

If a manager is spending most of her time fire-fighting and trying to keep everything in order, she probably isn’t a good fit for leading a team into the next stage of growth.

This doesn’t mean the manager is necessarily a poor performer, it just means she’s reached a plateau (possibly a temporary one) in evolving her skillset. And if that’s the case, bringing in an external hire who has experience operating in that next stage makes a lot of sense.

Alternatively, if a manager is doing exceedingly well, and is navigating the current stage with ease, that’s a sign that she’s ready for a challenge. In that case, you should consider promoting internally.

Final Thought: Managing to the Next Stage

I’ve been founding and scaling companies for 20 years, and in all that time I can count on one hand the number of executives who I’ve seen evolve with a company over all four stages.

So if you’re not able to do it, don’t be bummed: It doesn’t mean you’re a bad manager, it just means you’re better-suited to working in a particular stage of a company’s growth.

Evolving your skillset at the same rate that a company is growing is no easy task. But if you have the discipline, and you’re committed to learning, it isn’t impossible.