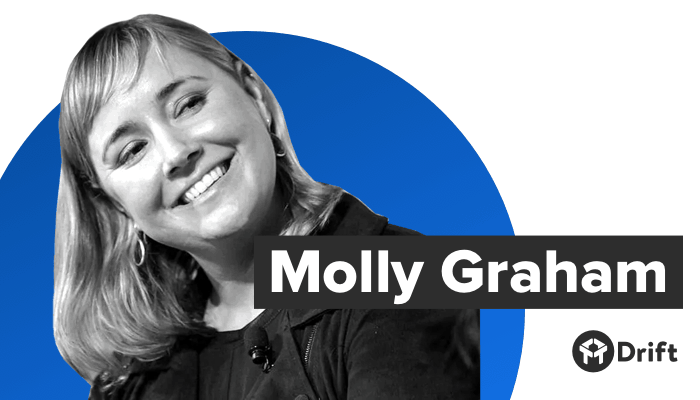 When Molly Graham joined Facebook, where she worked on employment brand and mobile, there were about 80 million users. When she left four and a half years later, there were 1.5 billion. Remarkable growth, without a doubt — but embedded in that biographical detail is a lesson Graham likes to share with those who are faced with the unique challenges of hypergrowth.

“I often tell people at scaling companies to look at the graph that the company uses to explain progress in the business,” she says.

On a practical level, Graham says, this means that companies experiencing rapid growth over a short period of time aren’t just navigating new business challenges, they’re also navigating people challenges related to constant change. And that can be a significant challenge for employees — even those who are highly skilled at their craft.

“You could literally be the highest performer at Facebook when I got there, and if you did not evolve, if you did not change daily, you would be under water in six months,” she says.

So what does an operator or leader at a scaling company need to know?

With a decade of experience at companies like Facebook, Google, and Quip — which was acquired for $750 million in 2016 by Salesforce — Graham is in a unique position to share best practices for managing the impact of growth on an organization.

That’s why she recently joined Dave Gerhardt and David Cancel on Seeking Wisdom. I highly recommend you check out the full episode when you have a chance, but in the meantime, here are some of Graham’s key insights for managing change at a high growth company.


What Managers Should Know About Scaling Teams

#1 – Your first reaction to everything is usually wrong.

Life inside a rapidly growing startup is anything but predictable, whether you’re a founder or an individual contributor. It’s not unusual to be comfortable in a role one day, only to find that it has changed dramatically the next.

“It is very emotional [to work in this kind of environment],” Graham explains. She advises managers to acknowledge this complexity, but cautions against being reactive to change when it crosses your path.

Instead, she says her personal rule is to let two weeks pass before making any big decisions. After that, if you’re still feeling territorial, or that something just isn’t quite right, it could be a sign there’s an issue worth addressing.

Anyone who works at a rapidly growing company must be willing to change — and grow — at least as fast as the company is changing and evolving.

“That is how you get the opportunities that no one should reasonably give to you… if you’re willing to take these enormous leaps, and just be unafraid of what you don’t know and be willing to learn,” Graham explains.

This was a lesson Graham learned first-hand when she was at Facebook.

After working at the intersection of human resources and employment branding, she was approached by a colleague who was running growth and mobile at the company. He wanted her to help him build something that no one thought Facebook would ever build: a phone.

“Fundamentally there was a really big strategic problem of, we didn’t own the platforms, so Apple and Google were the two biggest platforms at the time, and Android was actually still pretty new when we were talking about this. But Facebook had to figure out how to have some sort of leverage if all or most of their users were going to be mobile. So one version was to try to build a platform, an OS and a phone. That was a project that was super fascinating, we learned a ton, and it spawned lots of other things — like buying Instagram, buying WhatsApp, buying Oculus — and a really unsuccessful phone,” she explains.

Even though the phone itself wasn’t successful, Graham says she doesn’t see it as a failure.

“I don’t really believe in failure if you learn who you are in the process of trying,” Graham says, referring to Facebook’s evolving identity.

#3 – You can learn anything if you’re willing to sound like a complete moron and Be skeptical of words with more than one syllable.

Graham says one of the best ways to learn is by making yourself vulnerable, and asking the clarifying questions others may be reluctant to ask.

“One of the things you learn if you routinely do things that you know nothing about is you start out thinking everyone’s an expert — and everyone knows the answer and you don’t — and then you end up learning that… no one knows what they’re talking about,” Graham explains.

Early on, Facebook’s Chris Cox, then the head of human resources, was the leader who taught her this important lesson.

“People would come in and give us advice at Facebook, and he would just look at them with big eyes and say, I have no idea what you’re talking about,” she explains.

But it was just that willingness to ask questions — even when surrounded by experts — that helped the team grow their understanding of the space quickly.

The Power of Giving Your Legos Away

“I just watched so many people go through so many scaling experiences where they’d be really excited to hire someone, and then the next day, they would have this moment of, ‘Oh sh*t, what am I going to do? Wait, is that person going to be better at what I was doing than I am?’” Graham states.

Rapid business growth like this can introduce all sorts of variables into a company’s culture. The trick is to acknowledge that those changes will happen at some point, and be prepared to approach them thoughtfully when they do. That is the art of being able to “give your Legos away” as Graham describes it.

Learn more about Drift at Drift.com.