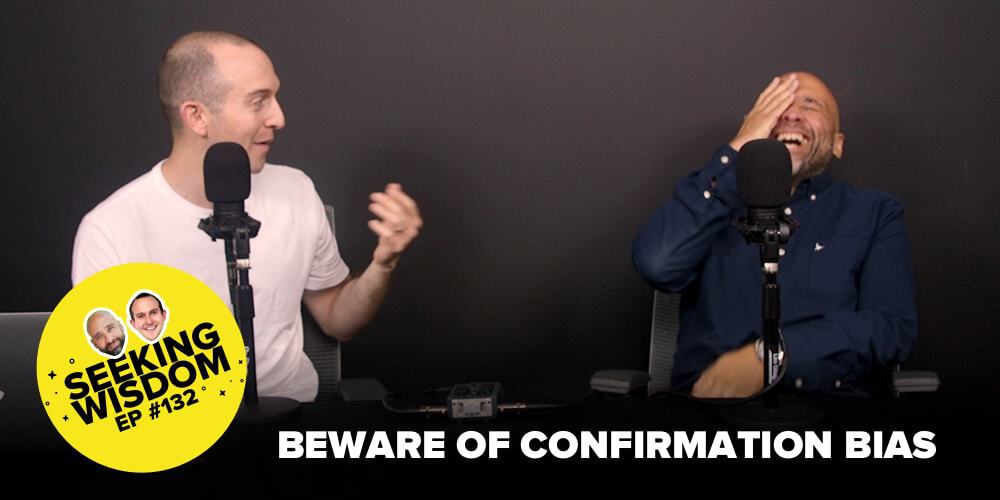 On Seeking Wisdom this week DC and I chatted about confirmation bias – what it is, why it matters, how it hurts us and, most importantly, what to do about it.

But first, let’s level set on a definition. Confirmation bias occurs when we only legitimize the facts that support our own views.

Think of it like this: Our brains have to process so much stuff all the time, it’s impossible to process every single thing. So naturally, we try to take a shortcut and end up focusing on things that already resonate with what we believe.

But that’s a big problem. Our own biases trap us in our ways and prevent us from becoming the marketers, managers and people we want to be.

While there are hundreds of cognitive biases, confirmation bias is one of the most important to be mindful of. Why? It can lead to poor decisions.

Take hiring for instance. At Drift we’ve been hiring like crazy (join our team, open roles here). I finally met someone great for a role we’ve been trying to hire for for a while. I was so pumped. I told DC right away and the first thing he says wasn’t awesome, hire them. It was SLOW DOWN. Watch for confirmation bias. Sleep on it for 24 hours ?

Hiring puts confirmation bias on full display, especially when you’re drowning in work and trying to build your team as quickly as possible. Instead of jumping to quick conclusions, wait for 24 hours to form an opinion. If you feel the same way you did when your first met the person (or first formed the idea) then go with it.

The important thing to remember here is that having confirmation bias isn’t a flaw. We all come to the table with our own ideas and preconceived notions. But instead of brushing it off, be aware of these biases so you can control them and think more objectively. You’ll make better decisions overall. Ask yourself, “Am I being biased?” It doesn’t mean you’ll come up with the perfect, completely impartial answer, but you’ll be less partial to your own pre-formed ideas.

How do you do that? Seek out information from multiple sources. Slow down. Sleep on it. Do your research so you can argue something from both sides. Gather all of the information before you jump to conclusions. Don’t seek out information that reinforces the views you already have. Challenge yourself and surround yourself with people who will challenge you. Create a framework that helps prevent your own biases from influencing your actions (like DC’s 24 hour rule).

How do you control your own biases? Shout us out on Twitter @Drift.

Referenced in this episode: