Coffee With a CMO: A Decade Of Marketing Lessons From Mike Volpe’s Last Hours As A CMO 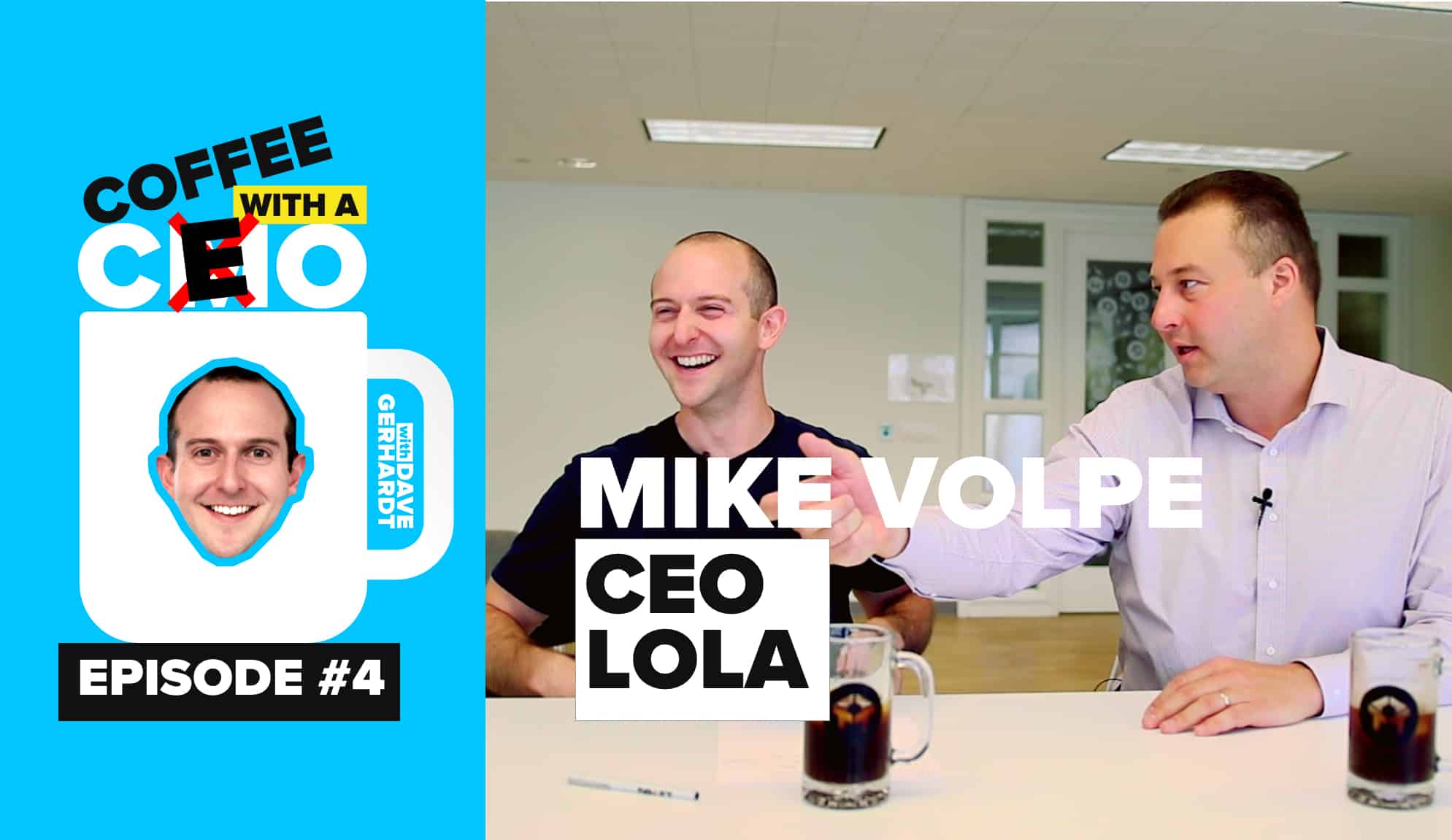 The latest guest on Coffee With a CMO is no longer a CMO — but I promise we didn’t cheat.

Mike Volpe is now the CEO of Lola, but he has a long history in marketing, and at the time of this recording, he still had a few hours left as CMO before he transitioned into the big chair.

The integrity of our video series remains intact.

In his episode, Mike talks about how your PR focus should change as your company grows, why you should associate with big-name brands, and why you should hire people who are better than you. 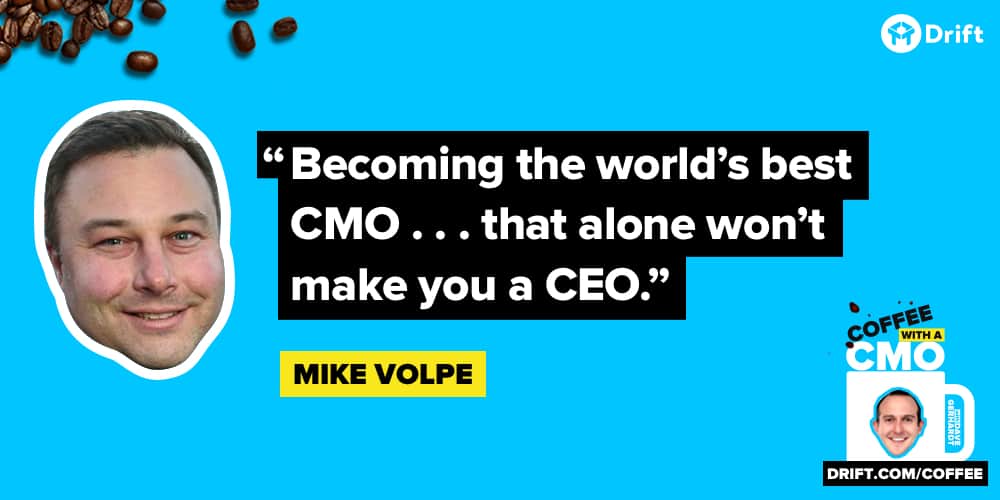 Check out some of the highlights below.

How PR Changes as Your Company Grows

PR is hard. I’m sure you’re already aware of that.

One PR lesson I learned from Mike early on helped me a lot, though. In his early days at HubSpot, Mike tried to win every award under the sun. It didn’t matter if the award was for

Any exposure is PR. In the early days of a company, if four people are willing to sit around a table and listen to your pitch, you should be there. If someone wants to acknowledge that your pens are the best, that can only be a good thing.

Then, as you start to become legit, your mindset should change. You probably don’t want to win the award for best pen. People will expect that you’re a lot bigger than winning an award like that, and that’s not the kind of PR you want.

So early on, if there’s any little opportunity, take it. But understand that you should grow out of that mindset over time.

Why Your Marketing Should Always Try to “Date Up”

I just finished a book by a guy named Shep Gordon. Gordon was a talent manager who managed huge names like Alice Cooper and who found Emeril Lagasse.

One of his secrets was that when he had these up-and-coming acts, he would try to get them seen with other people who were already big. He called it the “Flashbulb Effect.” No one knows who you are, but they assume you’re important because you’re near someone who is.

This easily relates to marketing. Who are the brands you want to be up with? If they’re winning awards, and you can make it on the same winner’s list, even if what you won isn’t very impressive, people will put you in that same group.

It goes beyond awards, too. Mike says that at HubSpot, they would do co-marketing, but call it “dating up.” For example, they did a giant webinar with Facebook, who was 1,000 times bigger than they were, and the name association was huge.

Think of how rappers pay to have more famous rappers add a verse on their track. This is a good mindset to have in your marketing, too, although it’s not easy to pull off.

Like with any selling, you’ve got to find an angle. In the Facebook example, they typically had a high churn rate with small businesses, because they would try Facebook ads then back out when they didn’t work.

So HubSpot pitched Facebook on doing a lot of education around how small businesses can turn Facebook traffic into real business.

Keep trying to date up, and if you’re able to offer enough value, eventually a brand will say yes.

Why Remixing Old Content Ideas Is Better Than Finding New Ones

You already know that video is an effective medium. But when you think of “video,” you’re probably not thinking of making a movie.

That’s exactly what Mike and others at Cybereason did, though.

They filmed a documentary, and even got their filming crew into the security operations center for the Department of Homeland Security (DHS). How did they do it? Just by saying they were making a movie.

It’s amazing: if you call and say you want to do a video for a podcast, places will slam the door in your face. But tell them you’re doing a documentary, and they invite you in.
The point is, Think about content in new ways. Mike says he’s not creative.

“I don’t have any original ideas,” he said.

Think about hip-hop. There’s originality in every new track that comes out, but most of that originality comes through remixing old things.

It’s about taking an idea that someone has done a long time ago, or looking at what someone has done in a different industry, or taking two ideas and putting them together in a new way.
Most people are gonna look at what other B2B companies do. But me, I want to study Shep Gordon.

It’s not like no one has done videos before. There are billions out there. So it’s really all about tweaking things and then executing really well.

Why You Should Hire People Who Are Better Than You 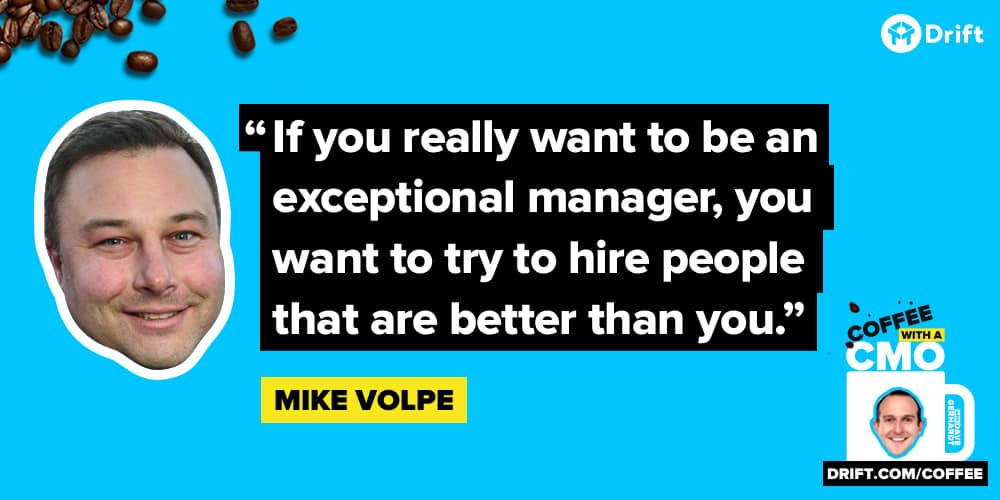 It’s easy to default to hiring people with less experience than you. But you should think about doing the exact opposite.

New managers come in all the time and hire people who are their juniors in every way. It makes sense: If you hire people with less experience, they’re more likely to look up to you. It’s an easier management job.

But if you really want to be an exceptional manager, try to hire people with more experience, people that are better than you in a given area.

If you run marketing, think of yourself as the CEO of your department. It wouldn’t be a good strategy if a CEO was the best person at the company at sales, marketing, operations, etc. If you’re running a whole marketing team, you should have a demand-gen person, a brand person, and so on.

And each should be better than you in that area.

Mike talked about having coffee with someone with three years of marketing experience — and it wasn’t about him teaching this person.

“In almost every conversation,” he said, “there’s something that that person knows that I don’t know.” Maybe the person is deeper in the weeds or has worked at other companies who do things differently.

“I can learn from literally anyone,” Mike said.

So even if the person you hire has 20 more years of marketing experience than you, there’s something you know that they don’t and they can learn from you. This is why you shouldn’t feel intimidated.

The goal, in the end, is simply to build an awesome team.

What CMOs Need to Learn Before They Can Become CEOs

Becoming the world’s best CMO . . . that alone won’t make you a CEO. You’re going to need to
know other parts of the business.

In particular, you’re going to need two other things:

Mike was lucky enough to learn that finance way back out of college, when he spent two years in investment banking. In two years, he probably read 500+ prospectuses or 10k annual reports, going through financial reports to understand how investors view businesses and how stock is valued.

If you’re working your way up on the marketing side, and you want to be CEO someday, you need to make sure you dig in on the sales side and the finance side. Mike knows this firsthand.
“You need to be broader than your individual role to rise to that next level.”

Want a seat at the table for the whole interview with Mike? Watch the full episode below.