Coffee With a CMO: Lessons From Joe Chernov On Micromanaging, Interviews, Bad Metrics and More 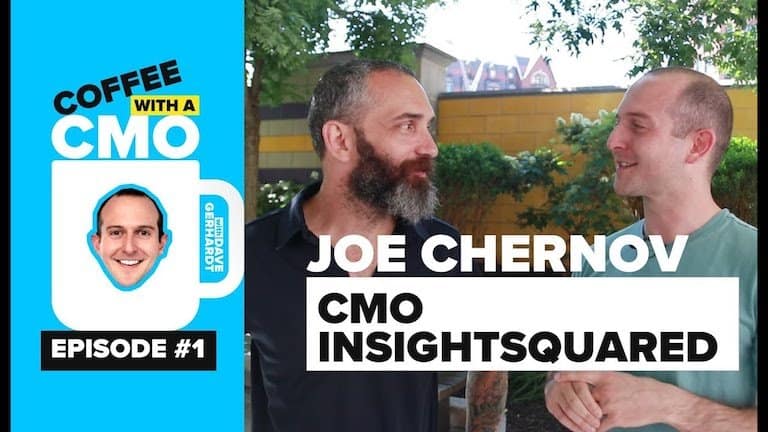 Some interviewers have their five questions they’re going to ask no matter how the guest responds. The second it’s answered, they go on to the next question.

The real stuff is in the middle. That’s the whole point of Coffee With a CMO, our new CMO interview video/audio series. The idea is to have a relaxed conversation with a CMO and let the conversation take us to the real heart of things.

Here are some of the highlights.

P.S. – We have A LOT more interviews lined up with the most accomplished CMOs in the game. If you’re into that, subscribe here to never miss an episode.

“The cost of empowerment is paid in decisions that weren’t the ones that you would have made,” Joe said.

You’ve got to come to terms with the fact that you’re going to give up some decisions that you don’t necessarily want made. But in exchange for that you get a more motivated, productive employee, and your culture will be better because they’ll be happier.

If you end up disagreeing with 5% of the decisions someone else makes, who cares?

Interviewing is An Overlooked Skill

Not interviewing people for jobs, but for podcasts, blogs, and videos.

The best interviews are conversations. That means you need to have the ability to go wherever the conversation goes.

But what if you’re sitting down with a scientist or an entertainer? You have such limited domain knowledge that you can’t always just let the conversation play out. That’s why a professional journalist that does the research and has the background is a true talent.

In marketing, there will be more podcast, video, and blog interviews in the future, so interviewing will become more important. The most interviewed people, like Joe, have tons of questions they’ve been asked. For them, the simple Q&A format is tired. You’re going to need someone who can really do their research and ride the conversation out.

Having No Metric Is Better Than Having The Wrong One

“Show me how I’m measured, I’ll show you how I behave.” Joe Chernov

A meaningful percentage of bad performers are likely underperforming because they’ve been giving the wrong incentives. It’s better to give someone no metric at all than the wrong one.

Take Joe’s job responsibilities, for example. CMOs at various companies do different things, but Joe is mainly responsible for doing these four:

For most marketers, all metrics are around demand-generation. You could be great at 2, 3, and 4, but if you’re not good at 1, you’re not keeping your job.

You don’t equally distribute your budget, either, so you end up starving the other things that matter. You could even argue that generating demand doesn’t even matter disproportionately more than the others for certain businesses with less of a revenue need. Building a strong brand, for example, will pay off later.

HubSpot is a good example of this. If, on day one, they tried to use their blog to spam people and sell them stuff, they would have strip-mined that asset. Instead, they played it right.

When Joe helped start the InsightSquared sales blog, he had conversations about what metrics they needed to hit before trying to commercialize the blog. Their only goal, at first, was traffic.

“We wanted to build an audience that we could monetize later,” he said. 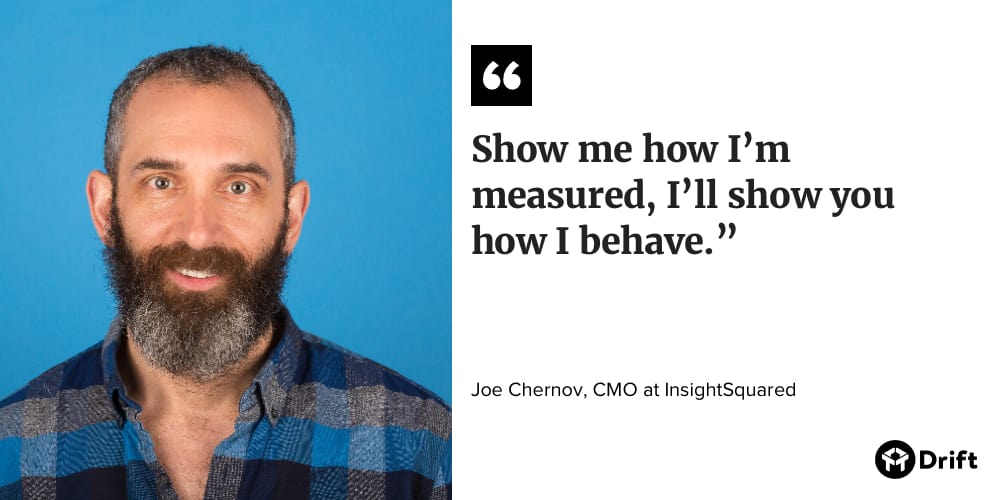 Career Transitions, To Serve The Business

Joe transitioned his career as a marketing leader from being a “content guy” to being an expert in ABM. We asked him what it was like to basically throw out the playbook that got him to where he was at.

“I was conflicted,” he said, “but I just wanted to solve a problem for the business.” The content model was the wrong model for InsightSquared.

With each new blog that gets spun up, it becomes incrementally harder for your voice to be heard—especially if you’re marketing to salespeople/marketers, where there’s a ton of noise.

The content model makes most sense when you have an enormous addressable market. You don’t have that many false negatives. If you can sell to anybody, then anybody who comes to your blog is a potential prospect.

But if you sell software to nuclear power plants, you’ve got a pretty restrained market. Most of the readers of that blog, if there was one, would be false positives because it’s such a specialized industry.

The problem is in the middle, where most companies find themselves. A blog is helpful for branding and building community, but it cannot be your long-term, primary lead-source in the way that it can be for HubSpot.

Hiring Is The Only Thing That Matters

At the end of the video, Joe shares something he learned from his former CEO, who responded to Joe’s frustration about his workload. He asked how Joe was performing in hiring. Joe said, “I have all these other things to do; I don’t have time for this.”

Turns out he had it all wrong, his CEO said.

Want a seat at the table for the whole interview with Joe? Pull up a chair by watching the full episode below.