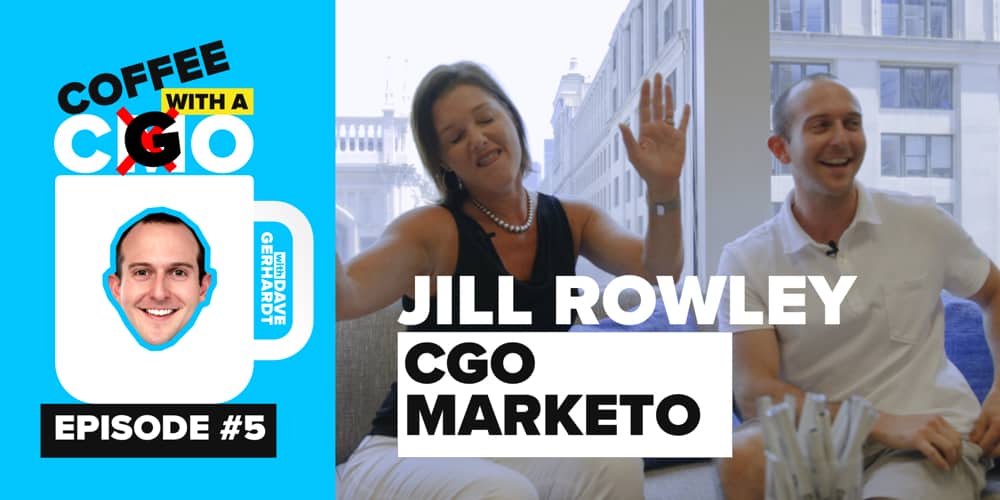 Okay so, Jill Rowley is not a CMO, and we didn’t drink coffee during this interview.

But Jill is an incredible and highly experienced sales and marketing leader, she was in town AND she’s a great storyteller so I thought we could break the rules and invite our first growth leader on the show.

Jill is the Chief Growth Officer at Marketo. She’s worked at tech giants like Salesforce, Eloqua & Oracle. And while she’s been in sales her whole life, she has a soft spot for marketing and loves to study the best CMOs in the world (hopefully watching this show).

On the episode, she told a crazy story about landing a deal at Eloqua that took almost a decade to close, why customers are your best salespeople and we discussed how the sales and marketing landscape is rapidly changing.

If you want to watch or listen to the whole episode, both the video and audio are below.

The Line Between Sales and Marketing Is Blurry . . . But It Hasn’t Disappeared

“I always say I’m a sales professional trapped in a marketer’s body,” Jill told me.

That doesn’t mean she thinks she can run marketing. In fact, she says she can’t. It simply means that she has a firm grasp on why both sides are so important to an organization.

That also gives her a unique perspective on the future of sales/marketing alignment. 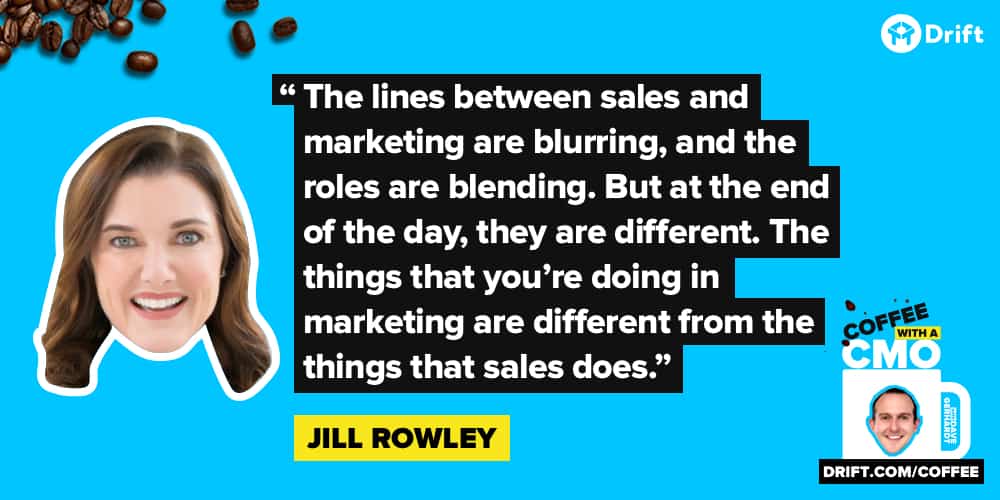 For example, as similar as the roles are becoming, sales still “owns the number.” You, as a marketer, might be compensated on your ability to help sales get to that number, but they still own it in the end. While you have a real impact on revenue, if the deals don’t get closed, the numbers don’t get hit.

Your Best Salespeople Are Not in Sales

You and I, we don’t get sold to anymore.

Nobody wants to be sold to. Couple that with the fact that buyers are more empowered than ever, and it’s easy to see how salespeople are being replaced by search engines and social networks.

For example, when I want to buy a product today, I ask my connections on LinkedIn about it. Then I read reviews on G2 Crowd. Only then do I reach out to a salesperson and ask my remaining questions.

The last place anybody goes when making a purchasing decision is a company’s website. That’s why I think it’s so important to build a brand.

It’s also why Jill says your best salespeople are not in your building. Instead, they’re customers who are willing to be your advocates. 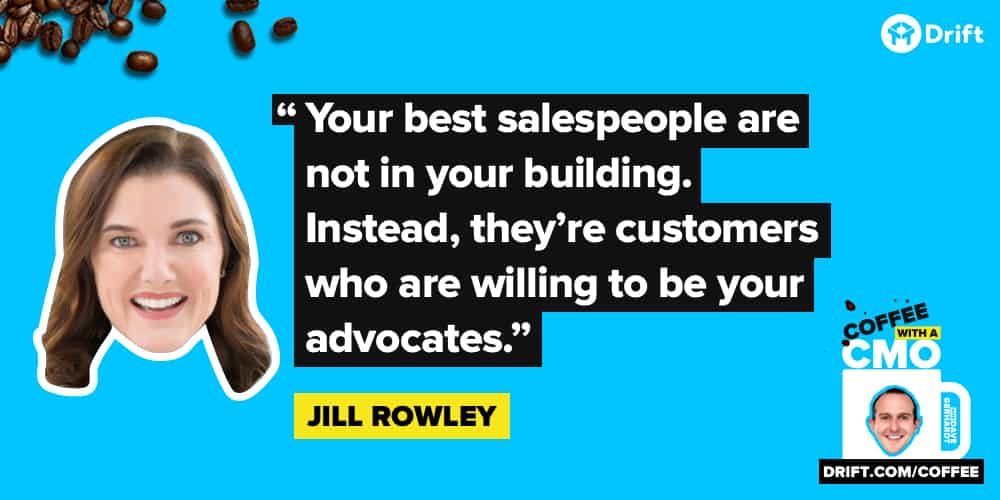 How Jill Ended up at Salesforce

In 1999, she was living in San Francisco. On April 15, 1999 (Tax Day, the most of romantic of days), she had her first kiss with her husband. He was her boss’s boss’s boss, so she had to make a decision. In the end, she decided it was her opportunity to get off the path of consulting and being a partner in a boring company and get on a new path following her passion—sales.

Jill was one of the first 20 salespeople at Salesforce.

“I knew I wanted to be in sales,” she said, “And I wanted to sell something that was easy to sell. I didn’t want to have to reinvent the wheel every time.”

The problem was, no one wanted to interview her because she was six years into her work life and had no sales experience.

Eventually, she got the Salesforce job through her network. She hadn’t heard of Salesforce, but the minute she heard about the tech world, she was hooked.

A Decade-Long Sale: Why You Should #NeverGiveUp

She took the article reprints from the wall and built HTML templates in Eloqua. Then she used the templates to send messages to people. (This was before email took off.)

One day, she decided to send one to Marc Benioff—and he replied.

No other reps were doing what she did, and Benioff sent her this message: “Get every other sales rep to do this!!”

Eloqua had told her to try out the idea, then sell it internally. It was brilliant. And it worked.

Unfortunately, she wasn’t able to bring Eloqua into Salesforce while she was still there. But in 2002 she joined Eloqua herself, and she was on a mission to finish the job.

Salesforce became an Eloqua customer on August 17, 2011. It took nine years to close that deal, and it was Jill’s account the entire time.

“#NeverGiveUp,” she said after sharing the story.

She held onto the Blackberry during those years, too, and when she got a 19-person use case session, she brought the Blackberry in and shared the note Benioff had sent her.

If you’ve ever convinced yourself that you’ve got no chance of landing an account, you might want to remember that story.

And here’s the audio if you prefer that: