The 3 Waves of 1:1 Messaging Software & Why Marketers Need To Adapt 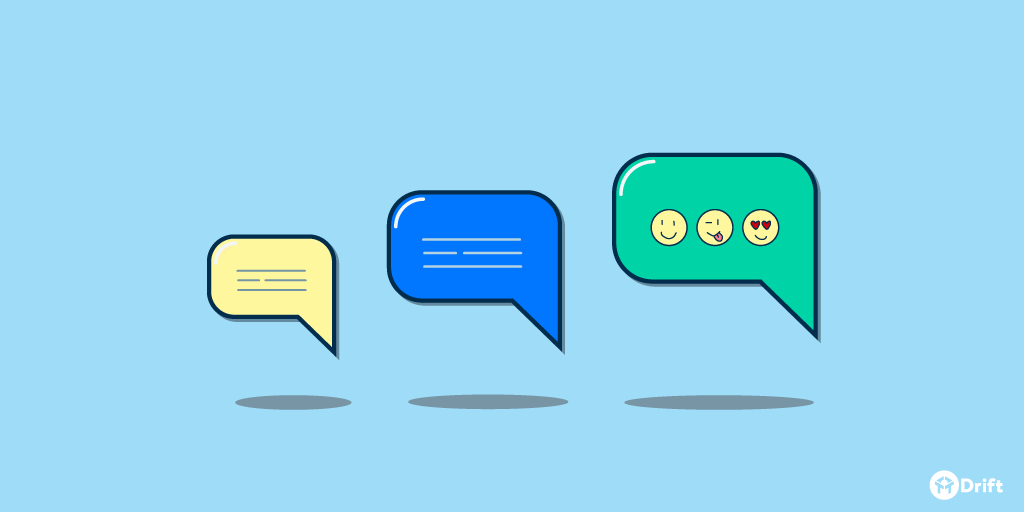 I try to hang up as quickly as possible, but it’s too late. The damage has already been done. So I wait. And I count: One Mississippi, two Mississippi, three Mississippi. Then, like clockwork, the sound of my sister’s voice begins to rumble through the house …

“Did somebody just pick up the phone!?!?”

The year was 1997, and approximately half of U.S. households with internet access were getting it via dial-up service provider America Online (AOL). Meanwhile, 100% of the kids living in those households were slowly but surely becoming addicted to AOL’s new, proprietary messaging program, Instant Messenger.

When I think about that first wave of messaging software, and the effect it had on communication at the time, here’s what comes to mind:

When AIM and its counterparts appeared on the scene, my address book-based friend communication system was quickly rendered obsolete. This was due in large part to one key feature: the “user definable online co-user list” — better known as the “buddy list.”

The buddy list made it significantly easier to communicate with multiple friends 1:1. Because instead of having to make a minimum of 5 individual phone calls in order to track down and talk to 5 friends, I could sign into AIM once, quickly scan my buddy list to see who was available, and then rattle off messages accordingly.

But for warring siblings, AIM did have its drawbacks. For starters, it lived on a computer … usually a shared, family computer. As a result, battling for computer time became a sport in many households. And “accidentally” picking up the phone to sever the dial-up internet connection became a popular guerrilla tactic.

There was also the privacy issue: Forget to log yourself out of AIM one time, just one time, and a sibling or parent would, inevitably, look through all your conversations.

The Rise of SMS

What ended up solving for these instant messaging pain points was a different technology altogether: Cell phones, especially the best-selling, candy bar-style Nokia cell phones of the late ’90s/early 2000s. In addition to introducing the world to Snake, these iconic blocks of hard plastic helped put Short Message Service (SMS) text messaging on the map.

In 2000, the first year the Pew Research Center measured cell phone ownership, 53% of U.S. adults were shown to own cell phones. Five years later, that figure had grown to 73%. And a lot of those folks, as you might imagine, were using their cell phones to send SMS text messages.

According to Pew, by 2005 there were 36 million monthly active SMS texters in the U.S.

Compared to first-wave, computer-based messaging software like AIM, SMS texting was more private (your messages stored on your device) and it was considerably more portable.

Its downside, however, was its cost: Cellular service providers typically charge a fee based on the amount of SMS messages you send and receive. (Fast forward to today, and that cost issue has started catching up with SMS. Revenues from SMS, as well as overall SMS usage, are in decline after peaking in 2014.)

Back in the early/mid-2000s, a few companies cropped up to challenge SMS, and these companies formed a distinct second wave of messaging software.

During this wave, Skype, Blackberry, and Google all seized on the opportunity to deliver more affordable mobile messaging at scale.

As you can see in the graph below, they had varying degrees of success. 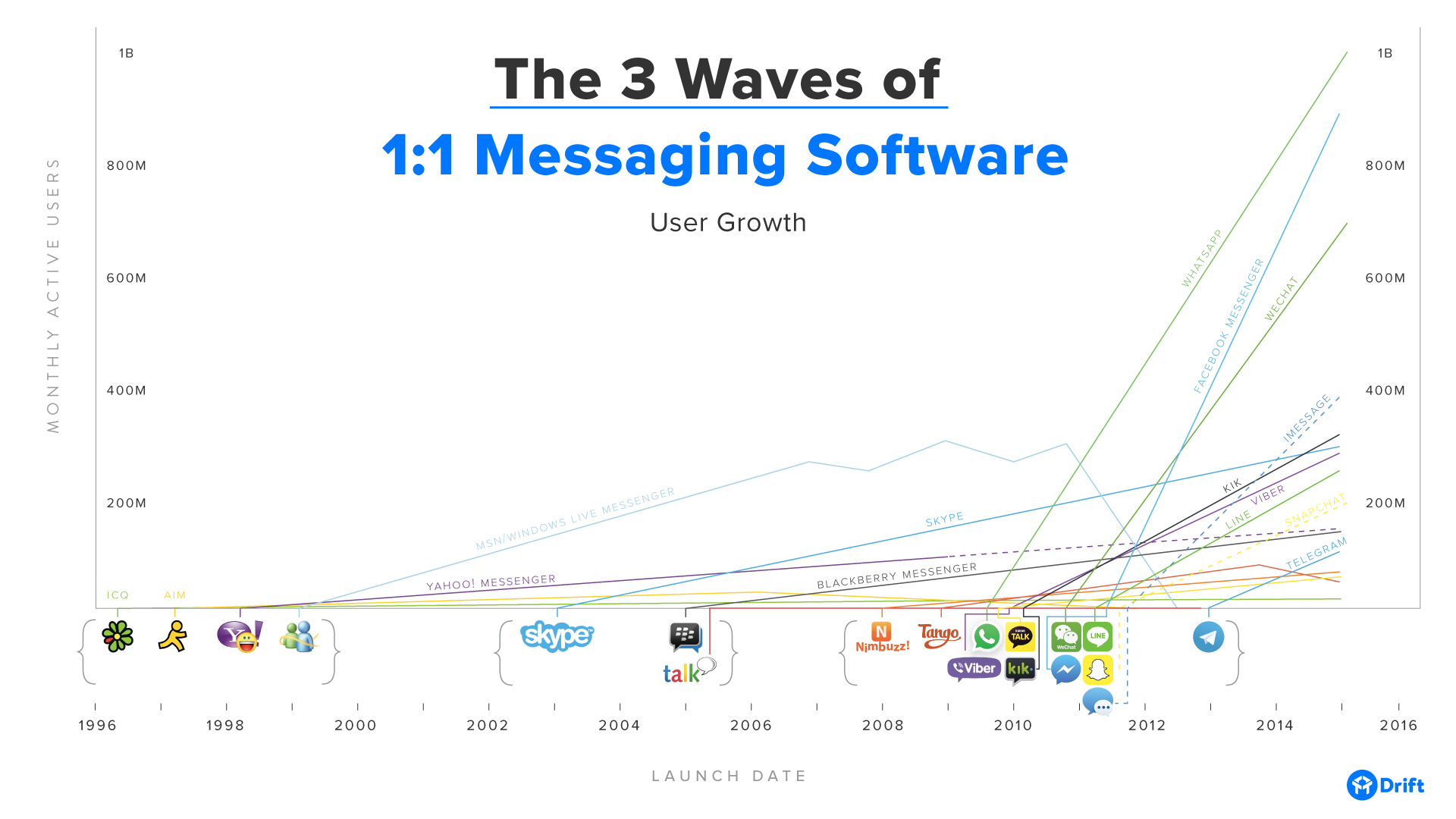 Finally, let’s turn our attention to the third the wave. The big one.

While you can think of the second wave of messaging software as knocking on SMS’s door, this third wave is actively breaking that door down.

This is the wave of messaging software that makes the previous two waves look like mere ripples. It’s the wave that’s raised the stakes from hundreds of millions of users, to billions of users.

And, in a great example of history being cyclical, one of the driving forces behind this third wave of messaging software was, once again, an evolution in cell phone technology.

The Rise of Apps

Smartphones offered a universally simple way to avoid the cost pitfalls of SMS text messaging, while simultaneously allowing for additional features and functionality to be brought into the world of 1:1 messaging: apps.

Recognizing the potential of messaging apps for smartphones, companies began entering the space in droves in the late 2000s/early 2010s. Today, 6 of the top 10 most used apps in the world are messaging apps (WhatsApp, Facebook Messenger, LINE, Viber, KakaoTalk, and WeChat).

When we look at the number of monthly active users these third-wave messaging services are attracting, and then look at the peak numbers first-wave and second-wave services were able to yield, there’s really no comparison. Today’s messaging software landscape is exponentially larger. There aren’t just more companies, there are billions more users. 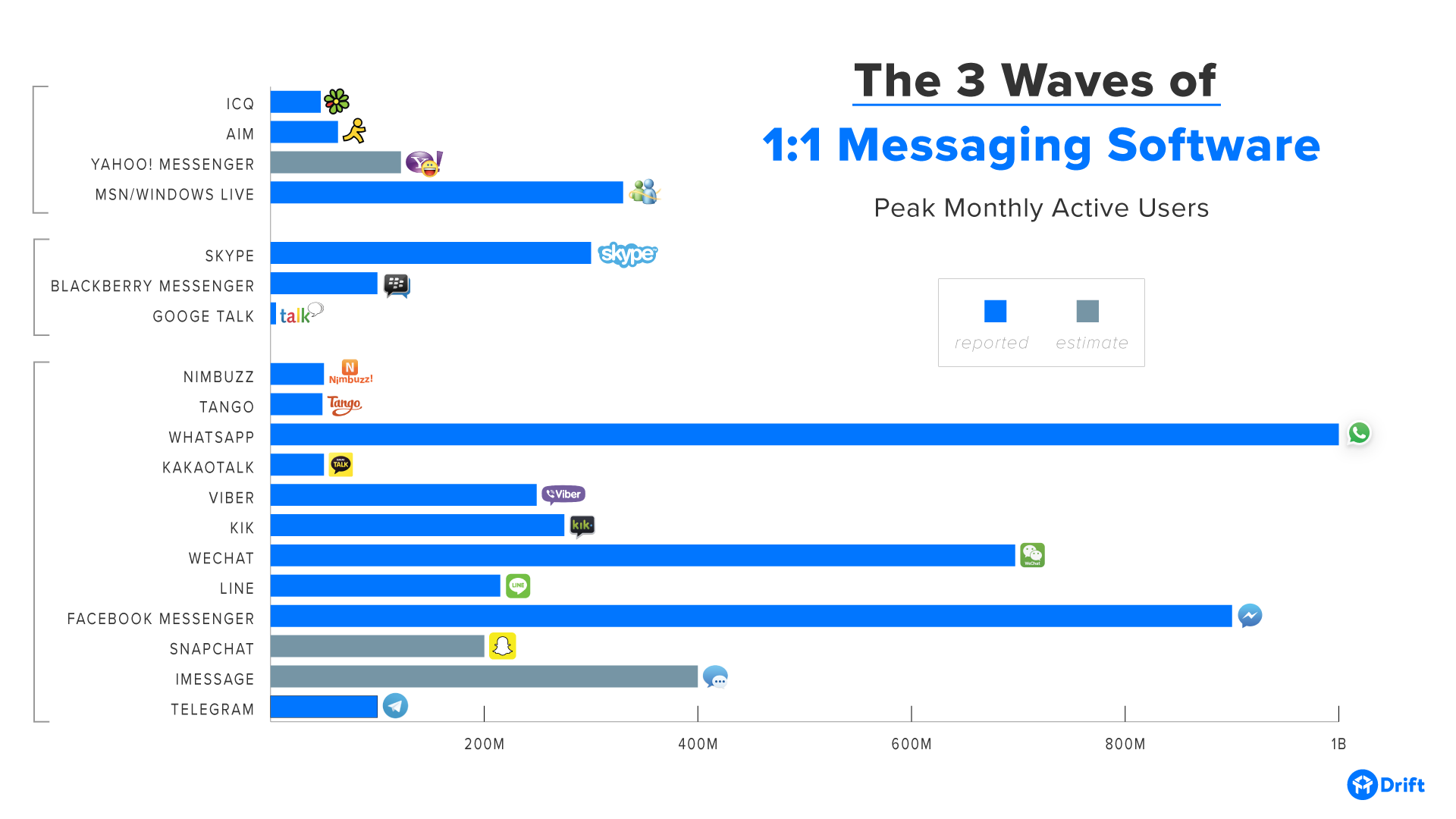 Then a funny thing happened: our cell phones became our computers. And that led to people stopping and thinking: “Wait, if my phone is now super-powerful, why am I still using SMS when I could be using an awesome messaging program instead?”

By the end of this year, eMarketer predicts that nearly half of cell phone users — 49.3% to be precise — will be using messaging apps. By 2019, it will be 65%. And in terms of monthly active users, messaging apps are already competing with and surpassing social media juggernauts like Twitter and LinkedIn.

As marketers, the sheer number of people flocking to messaging apps should be enough to get our attention. (After all, in order to truly understand our customers, we need to be hanging out where they’re hanging out and using the tools that they’re using.) But what makes messaging apps even more intriguing are the commerce, customer support, and advertising ecosystems developing around them.

As you can see, today’s messaging apps are about more than simply sending messages.

Messaging is the next big thing that businesses will need to understand in order to grow — and this is exactly what we’re focused on at Drift. Helping businesses have 1:1 conversations with their prospects and customers at scale.

Click here to learn more about Drift’s messaging app for marketing and sales.