5 Reasons Why the BDR Role Is in Jeopardy 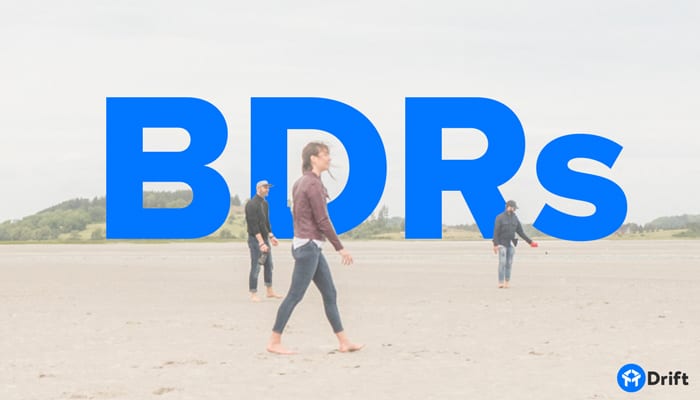 Spend enough time in sales and marketing circles, whether that’s on LinkedIn, Twitter, or in a Facebook group or Slack team, and you’ll inevitably hear people complaining about their BDR process.

To send qualified leads to their sales reps or account executives.

In your funnel, that BDR layer sits in the middle, right between marketing and sales. It acts like a filter, removing the leads who aren’t a good fit.

This, in turn, frees up your sales team so they can focus on doing what they do best: Closing.

From a customer experience perspective, however, that BDR-to-salesperson handoff can be a bit rocky.

Just imagine walking into a brick-and-mortar store, talking to an employee there for an hour about a product and why you were interested in buying…only to get handed off to someone else before you can actually make the purchase.

Why can’t you stick with the same person for the entire buying process? And how are you going to bring this new person up to speed on all the things you’ve already discussed with the previous person?

Loren Padelford, VP & General Manager of Shopify Plus, wrote about this same hypothetical a couple years back in a LinkedIn post. He then reached this conclusion about today’s BDR process:

It’s illogical and it’s not the way your customers want to interact with your company… This artificial hand-off creates a choppy experience for the customer, which in today’s super-fast, next-generation sales environments can actually slow the sales cycle down.

While people have started questioning the BDR role in recent years, it’s still the safest route to go.

Despite its flaws, the BDR role has still been necessary. (Because up until recently, there hasn’t been an alternative.)

It’s the Process, Not the People

To clarify: The issue here isn’t that the people employed in BDR roles do a poor job.

Instead, the issue is that the function of the BDR role itself has become outdated.

As Loren pointed out in that same article I mentioned above, the BDR function — generating qualified leads and connecting them with sales reps — once helped fuel Salesforce’s extraordinary growth in the early 2000s.

But as Loren was also quick to point out:

These days, more and more marketing and sale teams are trying to figure out a new approach, because the BDR-based ways of old are no longer yielding the same results as they used to.

And this development has prompted at least one CEO — Mitch Morando of the sales intelligence platform Whalr — to ask the question:

“Is the BDR role killing sales?”

To answer that question, let’s take a look at the five key reasons why people (like Loren and Mitch) have been calling the BDR role into question.

Setting qualified meetings for sales reps is often referred to as the “hardest job in sales.”

Jonathan Vaudreuil — business generation manager at Pegasystems, and former director of business development at InsightSquared — agrees with that assessment.

In a blog post he wrote last year, Jonathan went on to explain why being a BDR is so hard:

Spending 100% of your time calling, emailing, and cold prospecting is a brutal way to spend all day, every day. You have to deal with the fact that most people don’t pick up the phone and that most people who do pick up say “no.” Almost all of your emails will not be replied to. Most of your replies will be a “no” as well.

Being an BDR is the hardest job in sales because you’re doing the dirty work for someone else.

Sure, BDRs get compensated for their efforts. But at the end of the day, they’re still doing grueling work, facing rejection after rejection — all so they can fill up someone else’s calendar with qualified meetings.

As a result, the role comes with a high likelihood for burnout.

And — as we’ll explore in the next section — when BDRs burn out and end up leaving after just a few months, it can end up costing your business quite a bit.

LinkedIn puts the median base salary for BDRs in Boston at $40 thousand per year.

Meanwhile, in San Francisco, the median base pay for a BDR is $50 thousand. (And again, that’s before commission.)

But according to LeadGenius’s outbound lead generation manager, Joe Payne, that actual costs associated with running a BDR program are much, much higher.

Once you factor in recruiting costs, training, manager oversight and mentorship, equipment, office space, perks, taxes, insurance, and any other additional employee benefits, “most organizations are looking at hourly costs approaching $50-$70 an hour.”

And that’s per BDR.

That means some companies are spending north of $10 thousand per month, per BDR, to have them generate four qualified meetings. (So that’s $2,500 per meeting.)

And this is where the burnout factor comes into play in a serious way. Because, as Joe pointed out, before a BDR even starts ramping “they’re costing the average sales organization over $12,000 per year.”

So if a BDR ends up burning out just a few months after they start, that’s money down the drain.

Sure, running a BDR process might have helped you keep your customer acquisition cost (CAC) low five or ten years ago, but when you consider the effectiveness and efficiency of that process today, it’s becoming more and more clear that it’s time for a change.

A 2017 report from The Bridge Group looked at how many qualified meetings account executives booked A) when they didn’t have BDR support, and B) when they had a BDR team supporting them.

As the report’s author, David Skok, wrote: “It was expected that results would indicate a large uplift for the latter, but that was not the case.”

Instead, account executives who were supported by BDRs reported “only 0.8 more demos per week, on average.”

Ultimately, in the face of new technology and changing communication preferences, the traditional BDR process has become less effective.

Sales development representatives are tasked to meet the demand of a new kind of buyer that primarily lives online, buys faster, and spends more on cloud services than ever before.

Unfortunately, meeting this demand has proven challenging. And making the problem worse is the fact that instead of trying a new approach, most companies have simply doubled-down on what the already know.

But is it really worth it?

We talked to a VP of Sales at a SaaS company last week where they have a team of six BDRs.

Meanwhile, by using an intelligent sales assistant (instead of relying on a traditional BDR process), our sales rep Kevin has been able to book three to five meetings per day.

Look, at the end of the day, BDRs can still be effective. At a lot of organizations, BDRs are still successfully supplying their sales reps with qualified opportunities.

But when you consider how much money, time, and energy you’re investing as an organization to run that BDR process, it becomes clear that an alternative approach could help you become leaner and more productive.

Alright, time to get deep for a second:

Throughout history, we humans have relied on technology in order to become more productive.

For example, before the invention of the printing press, it might’ve taken a scribe weeks or months to write out an entire book. The printing press brought that time down to hours and days.

Technology is now having the same effect on the lead qualification process.

The B2B buyer’s journey once lasted weeks or even months, because leads kept being shuffled around, passed from marketing, to BDRs, and finally to sales reps.

“Think of it like this, every time you add a hand-off, you add time. You need to find time for your prospect to talk to the next person, schedule the call, have the call, etc. It all adds unnecessary time to your sales process.”

Using an intelligent sales assistant, you’re able to give your best leads a direct, real-time line to your sales reps, which means those leads are able to close much, much faster.

An intelligent sales assistant, or bot, can automatically route the leads that come to your website to the right reps based on sales territory and other criteria that you can control.

But that’s just the tip of the iceberg.

Bots can also answer basic product questions (using a knowledge base integration), and they can proactively ask leads qualifying questions — You write the sales scripts for them so they can ask the same questions your reps ask. Then you can control what happens next based on how leads respond (e.g. if a lead is a good fit, the bot can help them schedule a time for a product demo on a sales rep’s calendar). 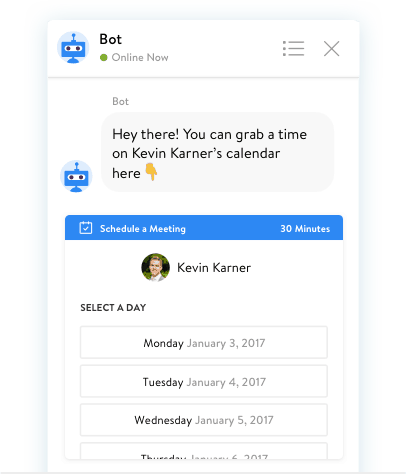 The best part is that bots can run their lead qualification process 24 hours a day, 365 days a year.

Think about it: Bots never go on vacation, they never take sick days, they don’t need any training or ramp up time, and — if you identify an issue in their qualification process — you can simply reconfigure them (vs. having to un-teach bad habits).

From a productivity standpoint, removing the traditional BDR bottleneck from your sales funnel is a no-brainer. But it also yields another (arguably more important) benefit: increasing your company’s credibility.

Remember that hypothetical I shared at the beginning of the post?

You walk into a brick-and-mortar store, talk to an employee for an hour about a product…only to get handed off to a different employee in order to continue the sales conversation.

Experiencing such a maneuver in a store might leave you wondering:

I just completed a research project with enterprise buyers around new tech platform sourcing and buying….without exception, none of them had any interest in speaking with BDRs…They said that these junior level sales people do not understand their businesses, cannot define and solve relevant business problems, cannot show how they solved such problem with competitors and tend to pitch demos prior to demonstrated buyer understanding.

Michael went on to say that when BDRs are properly trained, the outcome isn’t always as bad as what was described above. But the underlying issue is still the same:

In the eyes of CMOs, and CTOs, and other high-level decision-makers, BDRs have a credibility problem.

Today’s buyers don’t want to talk to younger, less-experienced employees first before they’re allowed to buy — they want a direct line to your sales reps.

And as Loren explained, by including BDRs in the mix, sales reps and account executives miss out on “a critical opportunity to start a relationship, build trust, and then expand.”

The point of writing this post wasn’t to pick on BDRs. It was to draw attention to the changes that are coming and the new technologies that can help sales and marketing teams adapt.

Ultimately, the BDR role doesn’t need to go away… but it will need to evolve.

Imagine a world where BDRs are paired up with intelligent sales assistants, which can automate all the tedious, repetitive tasks BDRs are responsible for now.

Those BDRs would be able to double their output almost instantly simply by adopting that new tech. (Or at least that’s what we’ve seen here at Drift.)

At the same time, by handing over the mundane tasks to a bot, that would free up BDRs to focus more of their time on managing tasks that require a human touch — like answering complex product questions.