Stress + Rest = Growth and Other Lessons From Brad Stulberg 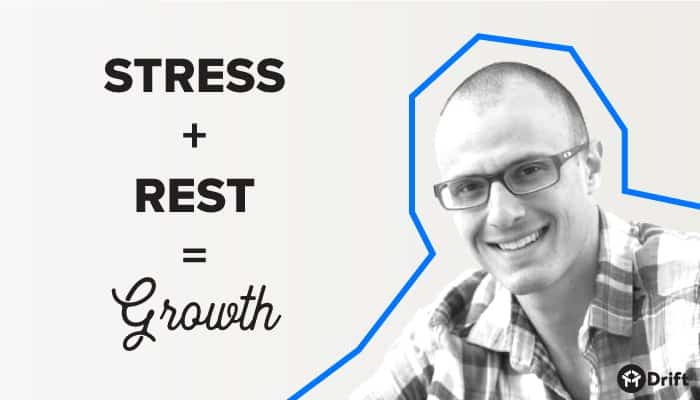 It all started with an article about work/life balance that David (our CEO) read in the New York Times.

With each paragraph, he was nodding his head in agreement. He knew that the author of this article had to be his kindred spirit.

Turns out, Brad Stulberg (in addition to being David’s kindred spirit) is the author of a new book — Peak Performance — which Arianna Huffington called “an essential playbook for success, happiness, and getting the most out of ourselves.”

Brad started out his career as a consultant at McKinsey, but as we discovered during a recent interview, he’s since switched gears to focus on personal and professional growth. In addition being a writer, he now has a business coaching CEOs and other top executives.

Here’s Brad describing his career path in his own words:

I went to Michigan, was a consultant at McKinsey, went back to Michigan for graduate school to study Public Health, and became really interested in wellness. So not necessarily fixing disease, but making people healthy. If I had more patience, I would have probably done some research and maybe pursued a PhD. But instead I became a writer, which is like a PhD without the research, and without the degree. Since then I’ve covered pretty extensively psychology, health, and science… but now it’s gotten more narrow into what I call human performance.

Check out the full interview with Brad below (it’s loaded with tips for personal and professional growth):

In a hurry? I’ve pulled out some key lessons from the interview that you can read below:

This is Brad’s formula for achieving peak performance, which essentially boils down to this:

In order to grow, whether it be personal growth, or business growth, or growing a relationship, you need to do two things.

Here’s how Brad explained it:

Think about how you make muscles stronger, like your bicep muscle on your arm. You have to stress it. You have to lift a weight that breaks the muscle down and tears it. But if you lift way too heavy of a weight, what happens is you end up getting injured and you tear your bicep tendon. But if you lift a two-pound weight, you could sit there all day and nothing’s going to happen. You have to find a weight that works your muscle just about to fatigue — embarrasses it but doesn’t totally crush it. That’s step one. That’s the “sweet spot” weight.

Step two is if you just lift that weight all day every day, you’re going to end up literally burned out. So what you need to do is find the weight that stresses the muscle to get a stimulus, but then rest and recover in between sessions so the muscle gets stronger. And I think that is a pattern that holds true for everything — for how to grow cognitively, how to grow creatively, how to grow emotionally, how to grow in a relationship, and even how to grow a company.

2) “Work-life balance isn’t something we ought to strive for.”

Yep, you read that correctly. It’s one of Brad’s main arguments: In order to grow, you sometimes need less balance in your life, not more.

This notion of balance that is so commonly talked about in the culture is, I think, an illusion. Or maybe not an illusion, but it’s not something that we ought to strive for. To me, work/life balance, as it’s generally spoken about, it’s kind of like going through the motions. You clock in, you clock out, you have your hobby, you have your family, time you go to sleep, you wake up, you repeat. That’s very very different from going all-in on something and being super passionate about what you’re doing. The times in my life when I’ve been most happy and alive have been the times when I’ve been the least balanced.

The happiest times in Brad’s life were times when things were out of balance, when he was completely absorbed in a project — like writing a book.

When I was writing a book, it was the only thing on my mind. I’d wake up in the middle of the night and jot down notes…I couldn’t really even be in public. It’s like I developed a social disorder. My book was all-consuming.

Another example? That time he went all-in on hiking the Himalayas.

I spent a summer hiking in the Himalayas … That was the only thing I was focused on. No devices. Nothing. And I was super happy.

Oh, right. And then there was that time he fell in love with his wife.

At least in my relationship, there’s a six-month period where you just kind of know that she’s the one. I wasn’t thinking about anything else so during these times in my life. I had no balance and I was completely consumed so I was kind of thinking work/life balance — maybe it’s the wrong thing to strive for.

4) “…But have the self-awareness to evaluate the trade-offs.”

However, while going all-in on the things (and people) you’re passionate about sounds romantic — and more exciting than living in some perpetual state of balance — Brad was quick to point out that this approach also has the potential to be dangerous.

Because if you go all-in without the awareness of what you’re going all-in on, or what you’re sacrificing as a result, you can come out the other end of it with all kinds of regrets. So in a nutshell … we shouldn’t strive for balance. We should strive to pursue things that we’re passionate about, but to do it with the self-awareness to evaluate the trade-offs along the way.

This lesson ties back to Brad’s formula: Stress + Rest = Growth.

According to Brad, it’s a lesson that elite athletes have nailed, but that business people continue to struggle with.

I suppose you could summarize it as “work hard, play hard,” but the way Brad explains it makes it sound more professional that than.

So what happens with athletes is, you keep your hard days really hard and your easy days really easy. Otherwise you get stuck in this middle zone where your hard days are never that hard because they can’t be, because you didn’t take your easy days easy. And that middle zone is where careers are ruined … Too much stress without enough rest leads to injury, illness, and burnout. Not enough stress and too much rest is complacency and stagnation.

6) “The best ideas come while you’re on vacation, or out for a run, or just chilling out…”

Because ultimately, as Brad told us, those periods of rest often end up being great times for coming up with ideas.

I have had all of my best ideas not while I’ve been actively working on the thing. My best ideas come to me when I’m on vacation, or when I’m out for a run, or when I’m just chilling out. And it’s not like I’m actively trying to problem-solve. When I go on a run, I just let my mind go, but I solve problems that I literally for three weeks had been thinking about and could not solve.

7) “There are 3 stages to creativity: immersion, incubation, and insight.”

Ever wonder why you come up with your best ideas in the shower? Then you’ll definitely want to keep reading.

The short version: In order to come up with a creative solution, you need to (of course) actively think about the problem you want to solve, but just as important to that process is ignoring the problem for a while.

So in the creativity research, the prevailing theory of how creativity works has three stages. You have immersion, which is you’re actively problem-solving and thinking about what you’re working on at the whiteboard. Then you have incubation, which is now you’ve primed your brain, so you kind of let it sit. And then you have insight, which is that “aha!” moment. And in a very micro level this is why people tend to have breakthrough thoughts in the shower. Because you’ve been working on something all day and your subconscious mind turns on.

8) Public speaking tip: “Don’t try to breathe away the jitters: Reframe it as excitement.”

By now, you’ve probably realized that Brad has an incredible understanding of how the mind works. So as a parting gift, I’ll leave you with this Jedi mind trick Brad shared with us for overcoming stage fright:

For the jitters, what I found in researching the book is that all the research says you actually shouldn’t try to breathe that away — you should just reframe it as excitement. You should be like “The reason that I’m jazzed up, the reason that like my heart’s beating a little bit fast,  the reason my body temperature is up, is because evolution has primed me to be completely ready and locked in for things that matter — and this matters.  So I’m going to go crush it.”  When researchers had people reframe their anxieties as excitement, they performed better at speaking and they had a better self-rated experience.

Want to learn more about human performance from Brad Stulberg?

Subscribe on iTunes and catch the full interview with Brad on this episode of Seeking Wisdom.