The Drift Lead Response Report: Why Every Minute Matters For Sales Teams In 2018

This year, B2B digital ad buyers–mostly marketers–will spend $4.6 billion to tell the world about their products.

They’ll use all the typical marketing channels and tactics to spread the word — display, content syndication, SEM, social, re-marketing, email, and more.

The ad copy will be different, of course.

The calls to action? Optimized for maximum clicks and conversions, naturally.

Across all these different ads, though, one detail will be the same: Every single one will direct people to a B2B website.

Doesn’t matter if it’s a landing page, a homepage, or a company blog. The billions of dollars we marketers spend in 2018 will go towards driving traffic to the one place where people can buy what we sell, our company’s website.

But before the billions have been spent, and the leads have been driven to our websites, we need to ask ourselves one important question:

What’s actually happening when they get there?

Ask any B2B marketer how they engage potential leads on their site, and they’ll probably say they’ve got it covered–maybe they have some forms people fill out when they want to talk to a sales rep or book a demo. Maybe a landing page prompts them for their details in exchange for high value content, dropping them into an email nurture campaign.

But are you really engaging hot leads fast enough to actually capitalize on intent?

Seven years ago, researchers attempted to find the answer to this question by auditing the lead response times of over 2,000 B2B companies. The results were published in Harvard Business Review: If companies didn’t respond to leads in five minutes or less, they risked losing them forever.

But the most shocking part of the audit? The average response time for B2B companies that bothered to reply at all was a massive 42 hours–almost two full days.

In 2017, we followed up on that epic lead management study with an experiment of our own, and tested the response times of 433 sales teams. Through our research, we discovered that only 7% of B2B companies were responding to leads in five minutes or less. We also surveyed whether or not these companies used tools like live chat to connect with leads in real-time on their website. To our surprise, we discovered that 86% of all companies weren’t using chat or messaging tools to assist them in hitting that coveted five minute mark.

Our research results made it abundantly clear: B2B companies were falling short.

But a year later, have businesses taken the right steps to accelerate their lead response rates?

Now that we’re on track to spend $4.6 billion dollars on ads that send leads back to our websites, is there any indication we’ll know how to engage them once they get there?

All solid questions that needed answers.

So in April 2018, we decided to conduct our lead response experiment again.

This time, we tested 512 B2B companies. The test entailed submitting a request or contacting each company via their website, and then tracking how much time elapsed between initial contact and response received. The response time was calculated over a five day period of time. If a company didn’t respond during that window, they were counted as not having responded at all.

After a week of collecting responses, we tallied the results.

And they were shocking.

More than half of B2B companies still aren’t following up with leads–at all.

Of the companies we surveyed, only 42% responded within the five-day timeframe. With the abundance of technology available to provide instant, one-to-one engagement with leads, it seems bizarre to make leads wait days to hear back from your sales team.

But that’s not even the worst of it.

Things get especially rough when we look at the inverse of the aforementioned statistic: while 42% of companies ultimately responded to our request, 58% never responded at all.

I repeat: more than half of all companies completely ghosted us. 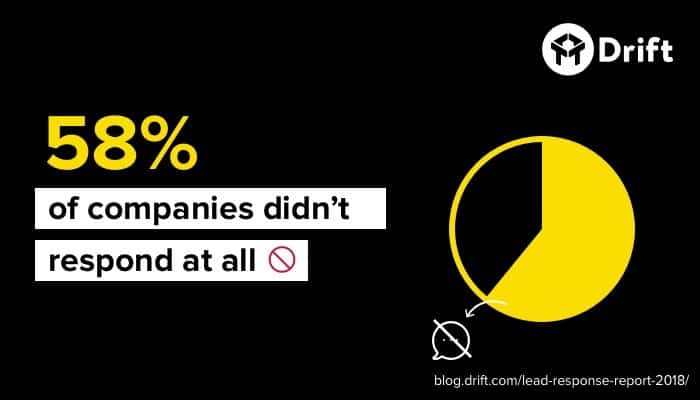 Hard to believe that could happen in the same world where marketers are collectively spending billions to drive traffic to websites. But there it is, in black and white.

So, what’s going on here? Why are hot leads being ignored by hungry sales teams?

Take a look under the hood of any sales organization, and you’ll see a variety of reasons why this is the state of lead response at so many companies. Instead of designing a strategy that puts the prospect first, many companies are still married to highly manual practices that build major delays into lead response time.

90% of all companies didn’t respond in under five minutes.

Every minute matters when it comes to lead response. Despite this, our 2018 follow-up research found that only a small minority–just 10% of businesses–responded within HBR’s lead response time frame of 5 minutes or less. This is up a few points from last year’s result. 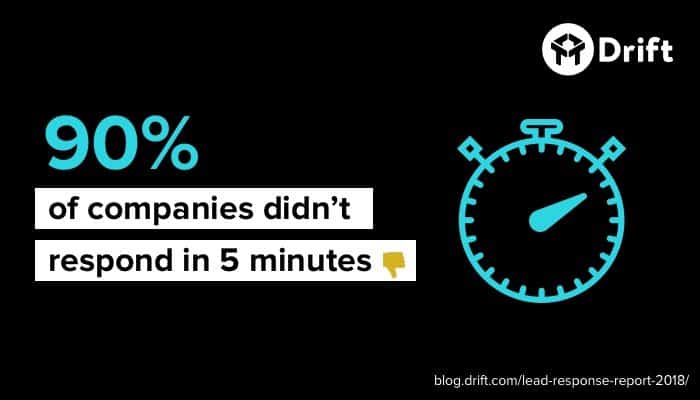 You want to balance how quickly your sales team responds with the degree of timely and personalized outreach they can provide. If, for example, you’re using a marketing automation tool to blast leads with immediate and impersonal emails, you may be sacrificing a conversational approach in the interest of time.

Only 15% of companies have live chat on their site.

Email is a good way to engage prospects within that magical five minute window of time. But real-time messaging is better, putting you in 1:1 conversations with prospects within seconds of them landing on your site.

Surprisingly, we found that the vast majority of B2B companies still don’t have a chatbot on their websites. That’s a huge missed opportunity. 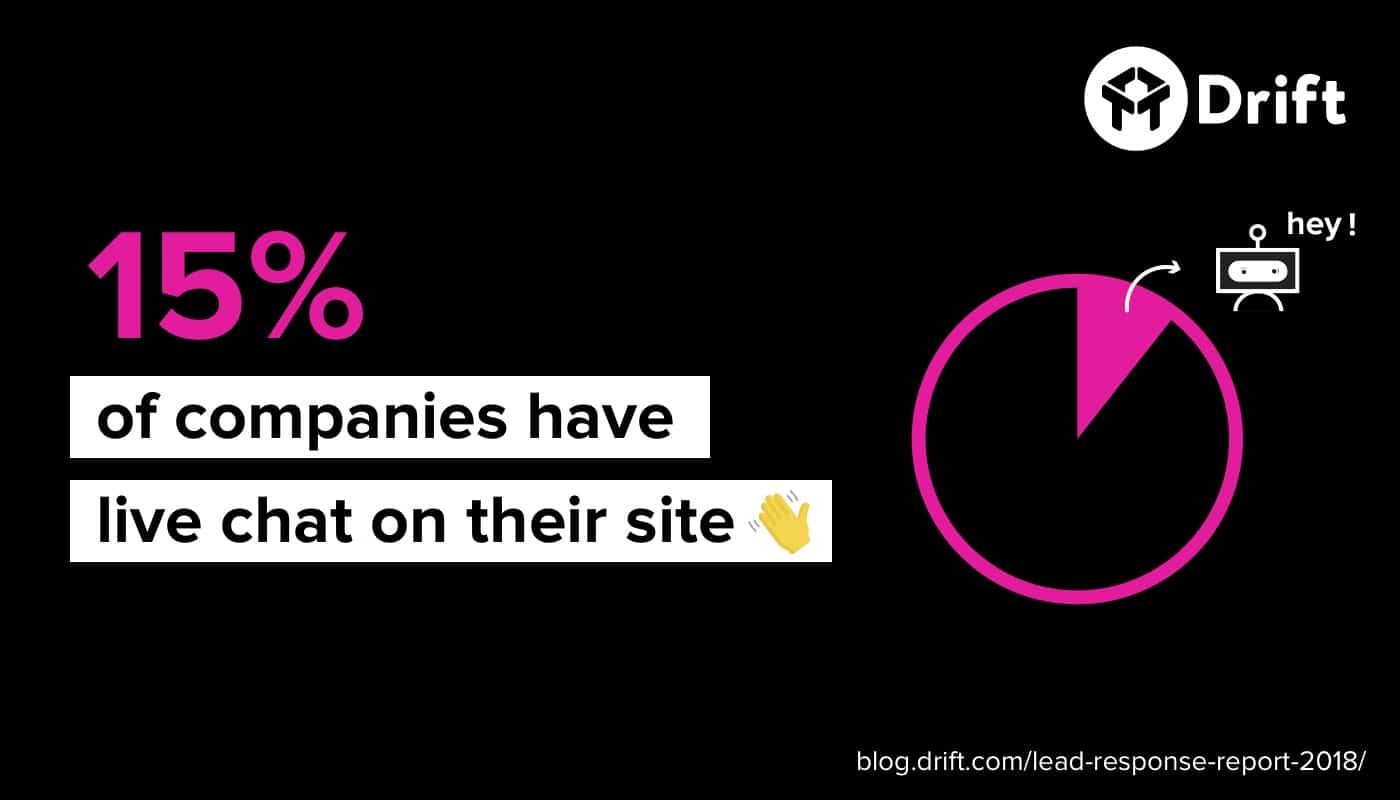 While real-time messaging is a relatively new concept for B2B companies, demand for 1:1 messaging between people and businesses isn’t. In an often-cited study of 6,000 global consumers, 90% of people said they’d prefer to use messaging to talk to brands. Still, many B2B brands just haven’t caught up.

But that’s about to change.

As the experiences people have shopping in the B2C space carries over into the world of B2B, an increasing number of B2B buyers will want to shop the same way they do for consumer goods.

“Now it is the case that B2B buyers, professional and non-professional buyers, are choosing how they want to interact with companies. And companies can either choose to force them into a channel the company is comfortable with, or…the other way, which is for the companies to accommodate.”

By giving your leads the ability to start a conversation with you while they’re on your website, you not only maximize the engagement of traffic to your site, but you build a sales process that aligns with how people actually shop.

The Mass Consumerization of the B2B Buying Process

When you talk about accelerating lead response times in the B2B space, what you’re really talking about is the massive shift in the way businesses sell to other businesses.

Gone are the days where simply owning the supply was enough–today’s B2B shoppers want the same kind of on-demand shopping experience they have when they’re buy personal goods.

“It’s not as though you have a B2C consumer experience that blows you away on Amazon, or Nordstrom, or Sephora, or Charles Schwab–or wherever you’re going to go–and then, all of the sudden, go to work and say, ‘Well, now I expect a much worse customer experience, and I’m happy with that.”

Indeed, today’s B2B shoppers not only think the grass is greener on the B2C side–it actually is.

So how do forward-thinking sales teams craft a strategy for boosting lead response times?

They build an approach that’s as focused on delivering timely responses as it engaging them in a valuable conversation.

Digital ad spend will continue its steady growth year over year. We’ll continue to drive leads to our websites. With the help of a conversational approach and real-time messaging, smart sales organizations will capitalize on this trend, and turn website visitors into highly engaged leads that convert quickly.

But it starts with taking action now.