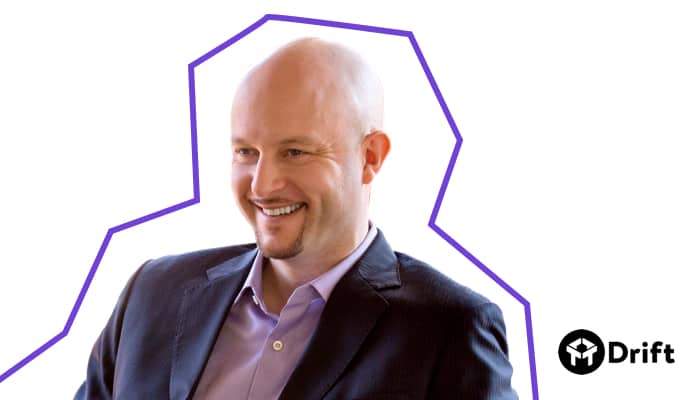 John Barrows is a world-class sales trainer. He’s worked with teams at some of the most recognizable software companies of the last decade, like Google, Salesforce, Okta, Box, and LinkedIn–just to name a few. And he’s routinely called on to help new and seasoned sales professionals be more effective in their roles.

But just over ten years ago, his company, ThriveNetworks, was acquired by Staples. Not long after, Barrows was fired.

“I don’t have much of a filter, and I don’t like politics,” he explains matter-of-factly.

It didn’t stop him, though.

After Staples, Barrows joined Basho as Director of Sales and Training. By all accounts, it was an amazing opportunity. The company had millions in revenue and a book of business that included Forrester, Gartner, SAP, and a company that had just started to gain momentum in the SaaS space: Salesforce.

“Then one day, the CEO walked in and decided the party was over,” Barrows says.

In one morning, thirty out of thirty-five employees were laid off, including the entire sales team. No warning, no transition period–it was done. The business Barrows had joined would shift from providing training services to building software.

Naturally, people were upset. But John viewed the situation through a different lens.

Instead of walking away from the $3 million training business he’d helped build at Basho, he saw it as an opportunity to strike out on his own.

“I looked at this and thought: Nobody gets to start a company with a proven business model, a product that everybody loves, a client list that’s off the charts, and a revenue stream that’s already there,” Barrows explains.

So he and a few former coworkers launched Kensei Partners, offering the training services that had built Basho’s core business at the time. He ran the firm for a few years, before eventually going solo with JBarrows, the training consultancy he founded five years ago last week.

Barrows has trained some of the best sales teams in the world. But strangely enough, he didn’t realize his super-power as a teacher and trainer until after those pivotal experiences at Staples and running Kensei.

“I always say, I’m not a trainer. I’m a sales guy who happens to train,” he states, highlighting the difference between himself and the competition.

But in addition to being a sales guy, it’s clear Barrows was a born teacher, too–a realization he didn’t have until a conversation with his mother, a career counselor.

“I go, ‘Ma, I got this interesting opportunity to be a trainer, like a sales trainer–and I never really thought of myself as that, and I wanted your perspective on it,’” Barrows remembers asking.

Then, he says, his mother just started laughing.

“John, I never wanted to tell you what to do with your career, but if there was one person who’d be great at training and teaching, it was you,” his mother said.

These days, Barrows still trains and educates sales professionals around the world.

Like any teacher, his passion is evident. But like a modern sales professional, he’s prolific, sharing wisdom on everything from writing better sales emails to the future of AI. He holds nothing back. And during our conversation, he had a ton of advice for sales professionals.

Here’s a round-up of the lessons Barrows shared.

#1 – Learn how to have a conversation by boosting your business acumen.

When John was in his mid-twenties and went to a sales meeting with a prospect, he had an experience that changed his entire perspective on what he thought he needed to be successful.

And my CTO and I were doing our intros, and my CTO was like, ‘Oh, have you read that book?’ And the guy was like, ‘Yeah!’ The CEO was so excited when he asked that question. They went off for like fifteen minutes about that book. You could legitimately feel the rapport being built there. I felt like an idiot. So I decided, I have to start reading what CEOs read. I have to learn how to have that conversation.”

In order to have that kind of conversation, Barrows realized, he needed to connect with that CEO about the things he personally cared about. And that required a two-part effort: first, he’d need to boost his business acumen to understand the business challenges he faced, and second, he’d need to find out what books and knowledge a CEO like that would consume. It was then–and only then–that he’d be able to have the kind of conversation with executives that would help him close more deals.

#2 – Everyone is a salesperson.

Barrows believes that sales is quite literally the transfer of enthusiasm from one human to another. It’s why he believes that everyone is essentially “in sales,” whether they’re an SDR, a marketer, or an engineer.

“You ask an engineer about the last thing they built from a technical standpoint… And you literally see them light up when they explain it,” he explains.

Even though everyone is essentially “in sales”, Barrows says reps need to master the art of that excitement transfer in order to be successful. Sales is not only a profession, it’s a mindset, Barrows advises.

#3 – Over-service early marquee clients (and make a name for yourself).

“Go out and find that marquee client and do everything to get them,” Barrows tells entrepreneurs who are just starting out.

Whether that means giving your services away for free, or at a discount, having that one notable client can be a game-changer for landing new deals in the future. In exchange, he says, be sure to ask to use their logo, get a case study or even a testimonial that you can share publicly to get new business.

It’s an approach he used when landing Salesforce early on, and it won him a ton of other companies in the SaaS space.

“When I got Salesforce, the SaaS industry was like shooting fish in a barrel,” Barrows explains.

#4 – Beware of the salesperson who can sell anything.

In sales and marketing, we have this idea that the best sales reps are the ones who can sell any product on the market. But Barrows believes this kind of thinking is dangerous.

“A sales rep who can sell anything is just trying to convince people to do stuff just so they get a commission check. It doesn’t matter about what the client truly needs, they’re just convincing them. And sales isn’t ultimately about convincing people–it’s about understanding what they [as a business] are trying to do, and where they want to go.”

#5 – You don’t have to sell the best product out there to be successful.

Early on in his career, Barrows discovered that his personal belief in a product made it easier for him to be successful. But he wasn’t referring to the belief that the product was necessarily best in class, but that it made a difference to the right group of people, and solved a real problem.

“You don’t have to believe that your product is the greatest out there, but what you do have to believe is that, for the right clients, it’s the best solution,” he explains.

When All Else Fails, Work Harder Than Everyone Else

If there’s one lesson that pervades all of the wisdom that John Barrows shares, it’s the one about hard work. When he was just starting out in sales, he had no idea what he had to do to get to the top of his field–but he knew he wanted to be there.

“The only thing I could control was my effort,” he explains.

So he used it to get to the top: More calls, more outreach, more hustle. When he faced setbacks, he doubled down, leveling up his game and optimizing for learning whenever possible. For anyone starting out or building a career in sales, it’s a crucial lesson: That sometimes, the only thing standing between you and your big goal is your willingness to put in the work.