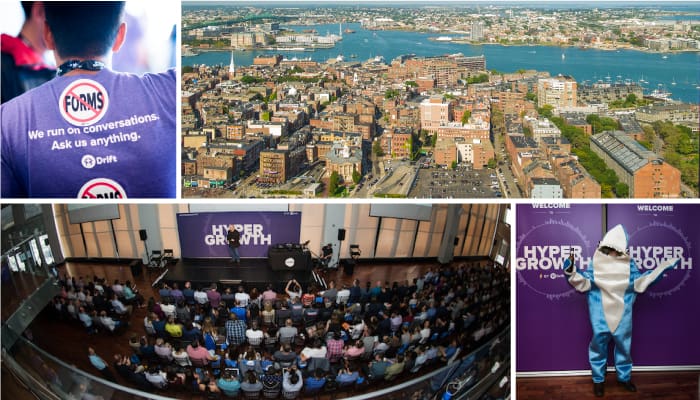 It’s hard to believe that HYPERGROWTH has already come and gone.

On September 25th, nearly a thousand members of the Drift community joined us in the State Room, 33 stories above Boston.

The views of the city were incredible, the beats were pumpin’ all day long (courtesy of DJ Fader), and everyone’s energy levels were off the charts.

As our first-ever conference, HYPERGROWTH was an opportunity for us to come together as a community — so we could learn from each other and share secrets for unlocking growth.

And by the end of the day, SO many secrets had been shared and there had been so many amazing moments that there’s no way we could recap everything in a single post.

So instead, we decided to look at all of the buzz happening around our #HYPERGROWTH17 hashtag and pull out the most-talked-about moments.

“I don’t know. I don’t have all the answers” @dcancel kicking off #hypergrowth17 with awesome words of wisdom @Drift pic.twitter.com/zIB27KNE4x

It was a refreshing way to kick off a conference.

Instead of standing up in front of the crowd and declaring how much of a genius he was, our CEO David Cancel (a.k.a.” DC”) opened HYPERGROWTH by telling everyone he doesn’t have all the answers.

He then got the entire HYPERGROWTH audience to yell, in unison, “I don’t know!”

As soon as artist Benjamin Von Wong explained how he had to tie someone to a shipwreck (yes, underwater) in order to capture the perfect photo, the HYPERGROWTH audience was hooked.

But it turns out Von Wong doesn’t just craft these beautiful visuals for fun — he uses them to drive change and to promote causes he cares about.

His presentation was definitely one of the highlights of HYPERGROWTH, with lots of folks tweeting about how different it was from the typical conference fare.

Amazed by @vonwong – Not your average conference here at #Hypergrowth17 👏👏👏 pic.twitter.com/8JLXyxywoS

3) A branding legend calls Google out.

Exhibit A: This slide, which shows what happened to Google after they failed to create a brand for their Google Glass.

That feeling when you sit next to a googler at #HYPERGROWTH17 and they see this slide 😂😂😂 pic.twitter.com/ir3zb6C9Wy

It was one of the funniest moments at HYPERGROWTH. But Mike’s presentation wasn’t all fun and games: He shared a ton of tactical advice for building a successful brand — and the audience was blown away.

Hold up while I pick my brain up off the floor. Ty @miketrap #hypergrowth17 pic.twitter.com/EGALJrnN0e

A long time ago, at a conference far, far away…

So it turns out that if you’re struggling to tell your company’s story, Luke Skywalker offers the perfect blueprint.

You see, at first Luke was hesitant to leave Tatooine and to go on an intergalactic adventure with Obi-Wan — but that change needed to happen in order for the story start. Because as Andy Raskin explained, all great stories start with a moment of change.

We had two panels at HYPERGROWTH. The first (pictured above) featured marketing executives from Box, WeWork, and ClassPass and was moderated by Quick Sprout co-founder Hiten Shah.

The topic: Is brand the secret weapon your company is missing?

How I feel about the panel at #HYPERGROWTH17 @Drift pic.twitter.com/MtJR9fNOxy

Then there was the second panel (pictured below), which featured marketing executives from Rapid7, Salesloft, and InsightSquared, and was moderated by our VP of Marketing, Ilya Mirman.

For the second panel, the topic was marketing and sales alignment. And as you can see from the tweet above, the conversation opened with a frank discussion about the tools that were — and weren’t — working for sales and marketing teams.

When it comes to conferences, most speakers hate getting scheduled right after the lunch break. Why? Because everyone’s stuffed and tired and ready for an afternoon nap.

That’s why we were excited (nervous?) when Brogan Graham specifically requested to speak right after lunch. But now we understand why he wanted that spot: He wanted to get the crowd pumped up and energized for the rest of the afternoon.

Mission accomplished, thanks in large part to the slow clap.

Ultimately, Brogan’s high-energy presentation left the entire room smiling. And we all walked away with a better understanding of what it takes to make human connections and be an authentic leader.

Love that #hypergrowth17 includes speakers beyond marketing/sales. It’s about GROWTH in all senses! #Novemberproject #movements pic.twitter.com/9GNnVaZFkp

7) A few lucky folks get free passes to HYPERGROWTH…for life.

Yep, we absolutely had to pull an Oprah-style “everyone look under their seats” routine at HYPERGROWTH.

No, we didn’t give away cars, but a few lucky attendees walked away with a silver ticket, which gives them free access to HYPERGROWTH for life.

Ready to grow at hyper speed for rest of my life! Thanks @drift for a great #HYPERGROWTH17 pic.twitter.com/osPEfViChR

8) Boston’s marketing godfather uses a video game to explain how he hires.

In other words, should you be looking for specialists, or generalists?

Mike got the idea from a video game (Team Fortress 2), where characters each have a specialized skill but can also develop tangential skills.

(In the marketing world, it’d be like having someone who specialized in writing long-form content, but who could also coordinate emails and do influencer outreach and handle some basic graphic design work.)

9) A 5-time Olympic medalist talks about never giving up.

Powerful talk by @NastiaLiukin about “finishing what u started”, focusing on the journey & pushing thru until a “good day” #HYPERGROWTH17 pic.twitter.com/uDuVu2sypI

Olympic medalist Nastia Liukin got the first standing ovation of her gymnastics career after the worst routine of her career.

She fell, face-first, in front of a packed arena. But instead of walking away, instead of giving up, Nastia got back up and finished her routine.

You can hear more of Nastia’s story in the video below:

10) The HYPERGROWTH crowd gets mindful.

By including speakers like Brogan and Nastia, we strove to make HYPERGROWTH about personal growth as well as business growth.

We continued that theme by having Ben Rubin, co-founder & CEO of 10% Happier, and Matthew Hepburn, an instructor from the Cambridge Insight Meditation Society, lead us in a live meditation session.

10% Happier is a meditation app. Matthew took us thru a live meditation sesh. His voice is so soothing. I felt transported. #HYPERGROWTH17 pic.twitter.com/jYpN0cLxna

Turns out, meditation “isn’t just for hippies,” as Ben put it. It can (and does) help top executives worker smarter and reduce stress.

11) A co-founder & CMO talks about giving his employees “the keys to the Ferrari.”

No, we’re not talking about the actual keys to an actual Ferrari, unfortunately.

But this tweet from Eileen summarizes Terminus Co-founder and CMO Sangram Vajre’s metaphor perfectly — giving employees “the keys to the Ferrari” means empowering them, trusting them, and appreciating their hard work.

“Give employees keys to the Ferrari!” Perfect metaphor for empowerment, trust, and appreciation. @sangramvajre #hypergrowth17 pic.twitter.com/8TBSIESj1d

So, do the employees at your company have the keys to the Ferarri? Or are they on the outside looking in?

12) Atlassian’s VP of Sales explains how automation can help you be more human.

Automation doesn’t mean you don’t need people. It means they can be people instead of machines! @kristenhaba #hypergrowth17 #sales pic.twitter.com/L4XE5InQQW

Look, this has been the case for centuries:

During her presentation, Kristen Habacht, head of enterprise sales at Atlassian, argued that automation doesn’t replace people — instead, it frees people up so they can focus on the tasks that require a human touch.

When people do tasks like little machines they are not happy. @kristenhaba #Hypergrowth17

13) A growth expert shares the lessons he learned at GrubHub and Pinterest.

One of the recurring themes of HYPERGROWTH was that the traditional approach to email for sales and marketing is broken, and that it creates a terrible experience for potential customers.

But as Casey Winters pointed out, the real issue isn’t that people hate email — it’s that they hate useless email.

Ultimately, some folks are happy getting emails from your business multiple times a week, and might even look forward to them — but that isn’t the case for everyone. In order for email to be effective, it needs to be fine-tuned to the audience.

Speaking of making email more effective… That’s one of our new objectives here at Drift.

We’re on a mission to make email smarter, and to connect it with the rest of your marketing channels so you can see — in real-time — when people are ready to have a conversation.

It was an incredible day of learning, followed by an incredible evening of kicking back, having a few beverages, and chatting with all of the speakers and attendees.

First, there was the cocktail hour, sponsored by CRV. You can see a great recap video below:

Then there was the after party hosted by DigitalMarketer, where we had two signature cocktails available (named for our co-founders).

The best part of today. The signature cocktails at the @Drift after party #HYPERGROWTH17 pic.twitter.com/D00zJ4oS6q

With HYPERGROWTH 2017 now behind us, the countdown is on…

HYPERGROWTH 2018 is only a year away!

Will we see you there?

‹ Thank You
Drift Product Update: Here’s What’s New From September ›
P.S. Join 30,000 of your peers. Subscribe to the newsletter for hypergrowth.