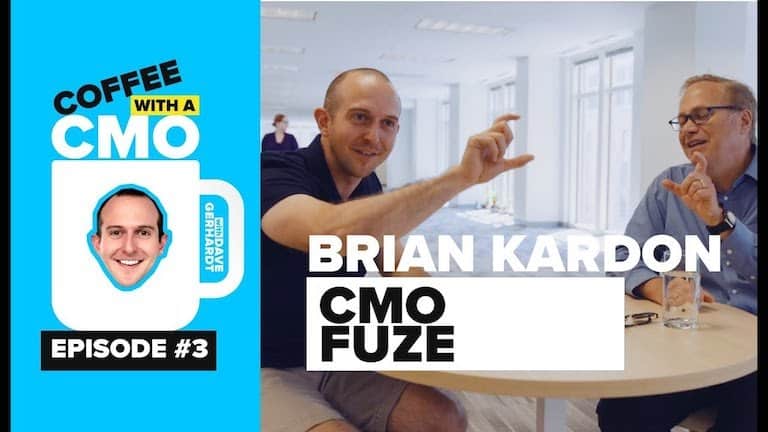 Marketing automation is like electricity running through the walls: everybody’s got it.
So what’s the next level?
Brian Kardon is the CMO at Fuze and former CMO at Lattice Engines, Eloqua, and Forrester. He joined us in our Coffee With a CMO series to talk about the future of marketing, why tech isn’t as important as it used to be, why he loves answering sales calls, and why you need to stop listening to other B2B vendors.
Here are some of the highlights from the interview.

Do Marketers Put Too Much Stock in Technology?

Marketing isn’t really about the tech anymore.
Just about everything plugs and configures well, so in many cases the pain points in marketing have shifted. Brian thinks the future will be much more about automation with artificial intelligence and machine learning, figuring out how to do things smarter and faster.
As technology keeps changing, everybody wants to focus on that technology and we’re missing something else. According to Brian, that “something” is setting sales up to succeed.
“Marketing doesn’t really exist unless a salesperson picks it up and you have the right SLAs,” he said. 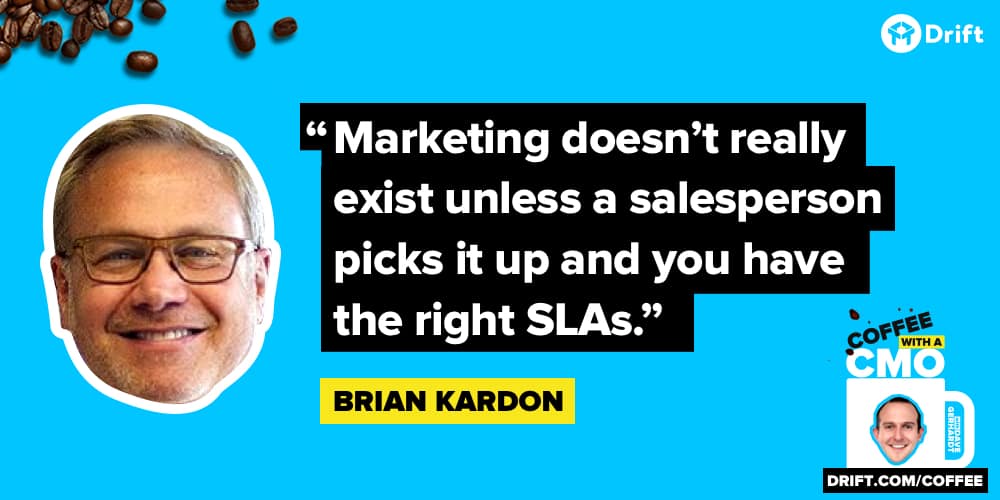 In the beginning of Fuze, Brian says he did something wrong. He overinstrumented the dashboards for the sales team. For someone fresh out of school, they were too complicated.
He assumed that BDRs would be as excited about the technology’s capabilities as he was. But at the end of the day, the tech was so complex that they weren’t looking at anything. They needed to get simple instruction on what to do each day.
It didn’t take him long to diagnose the problem.
He would frequently sit next to a BDR and ask them to do what they would normally do. He just wanted to watch. He quickly realized they weren’t prioritizing things properly. They were distracted, and they needed a true north.
“Most of my time today is spent on the integration of sales and marketing,” Brian said. “Not on the technology at all. The scarce resource is not the dollars: it’s time.” 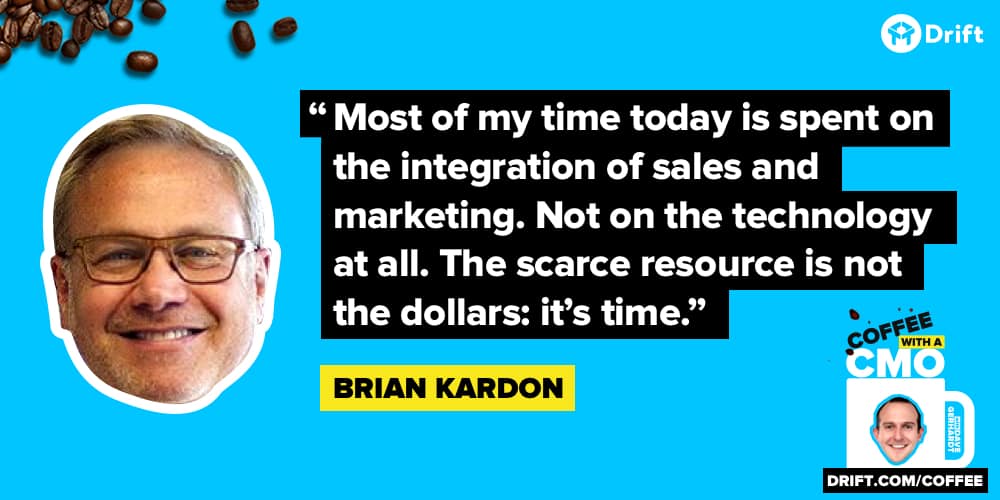 In fact, he thinks too many CMOs put in more technology than they’re actually using. About a year ago, he went through an audit of their tech and found out no one had logged into one of the technologies in six months.
A salesperson’s day can only handle so many new things.

Marketing Isn’t For The Lazy

When he was at Eloqua, Brian felt comfortable in many ways. He knew how marketers bought.
Now he’s selling to IT. He didn’t (and doesn’t) have the choice to be lazy because he doesn’t have a clue how they buy. So he does the research and talks to actual IT people.
A lot of marketers revert back to their own behavior, but things change, and not every buyer is the same. Instead, Brian says he likes the discipline of not being in MarTech anymore.
It keeps him from being lazy.

Why You Should Answer Sales Emails and Phone Calls

You know how it goes.
You get a great cold sales email, you show it off internally. Or you get a terrible one, and you put it up somewhere in your Hall of Shame.
Brian likes to do the same thing with phone calls. Marketers are anthropologists, after all. They study people, and you can get some good understanding about people when you answer sales calls.
The scenario: Fresh out of college, a kid calls you. They’ve reached the CMO, so they’re freaking out.
“They always want to set up a meeting,” Brian told us. “I say, ‘You don’t have to set up a meeting: This is the meeting. Go ahead.’”
It so often feels like the person on the other end is hoping no one answers. They have a certain number of emails and voicemails left. They don’t really want to talk to you.
That’s a broken SLA. It’s numbers-driven, and it leads to really bad sales calls when someone does finally answer.
But the flipside is also true. Brian even offered a job to someone who called him because he’d done such a good job.
He didn’t accept, but still, it’s the principle of the thing…

Personalization: The Next Big Wave in Marketing

Email click-through rates are terrible.
Just about no one (except Brian) answers the phone.
So how do you get through to people? What’s the next big wave?
The answer is that your messages have to be highly personal, and they can’t just acknowledge that someone went to Notre Dame or that they have a dog. Nobody wants that advice, though. They want to know how to automate things.
The hard truth is, the best emails are the ones whose senders have put in the time. That’s the only trick for the future: be real.
(Be sure to check out our piece on b2b website personalization)

The Benefits of the Right Peer Group

Brian is in a peer group that inspires him to do some creative things in marketing. He also looks for inspiration far outside the normal avenues.
His recommendation? Follow the CMOs at Apple, Google, and Adobe. Or listen to someone like David Edelman at Aetna who’s somehow managed to take a concept as boring as insurance and, using storytelling, make it interesting.
The only way to break through the fact that everyone has a blog, everyone sends emails, and everyone does everything the same is to zig when everyone else is zagging.
“There are people doing amazing things in B2C,” he said. “I think we’ve got to find other examples than just the vendor echochamber.”

Want a seat at the table for the whole interview with Brian? Pull up a chair by watching the full episode below.